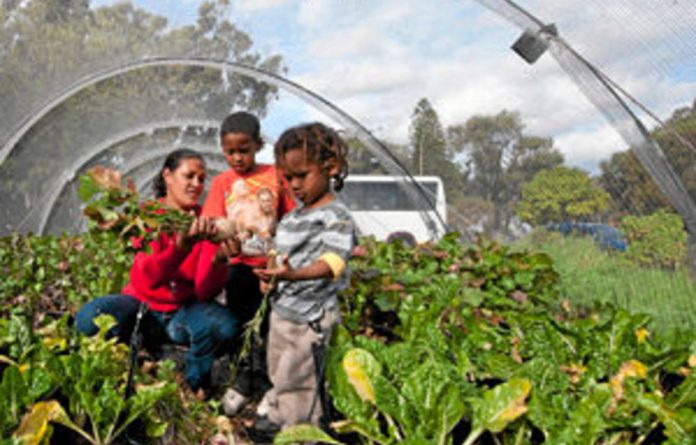 Rain, wind-blown sand and sunshine jostle for dominance. There is no one in sight except for older women hunched over well-maintained rows of healthy looking vegetable plants at the Siyazama Community Allotment Garden Association in Khayelitsha, Cape Town.

“There is too much wind in Khayelitsha,” says Monica Dilla when I comment on her extensive use of protective tunnels. “It destroys the spinach, giving it black streaks. The sun also burns the crops and makes the sand dry very quickly, forcing us to irrigate twice a day when it’s sunny.”

Many would argue it an impossible task; changing the farmer to consumer cycle in such a way that we effectively feed the poor, create employment and reduce our impact on climate change.Yet from within Cape Town’s poorest areas, a farming revolution is underway.

Dilla runs a co-op called Masikhanye Food Garden, measuring about 1.2 hectares, with 19 other women at the edge of the Siyazama association’s land. It was started in 2000, three years after the association’s first garden was established in the township. Masikhanye also has gardens in other parts of Khayelitsha, such as Harare.

In their entirety, the association’s gardens cover about 3.5 hectares of a narrow stretch of municipal land that was once temporarily occupied by Eskom. According to the Abalimi Bezekhaya organisation, which assists communities like these to establish gardens, it is the first community garden of its size in Cape Town.

Although the Siyazama gardens are thriving, Nobesuthu Mgomane, a gardener who is in her fifties, says membership of the association has dwindled as women have left because of old age or impatience.

“There isn’t a big youth movement in this sector,” says Dilla, who qualifies for a pension in October. “Many regard it as a job for old people who are uneducated. So we still have to find ways of getting them involved.”

With the help of Abalimi Bezekhaya, Masikhanye Food Garden sells its produce to suburban Capetonians at a weekly market known as Harvest of Hope. Crates with a variety of vegetables fetch R95 each and Dilla says the co-op makes between R8 000 and R11 000 a month, which is divided among the women. They also distribute food parcels of vegetables to members of the group twice a week.

The department of social development has reportedly told Masikhanye that it “needs to be sustainable and can’t be babysat forever”.

Masikhanye has joined forces with other farmers to form the Vukuzenzele Farmers’ Association, with the aim of approaching the department of rural development and land reform to acquire more land and access bigger markets.

In the long run this could bolster Masikhanye’s fortunes, because it struggles to meet the demands of a larger-scale market closer to it. “The Phillipi [fruit and vegetable] market wants us to pay for stalls and they demand a lot of quantity. We are small farmers — where are we going to get pallets of carrots?” asked Dilla.

In the heart of Phillipi other community farmers who are constrained by space, failing crops and the need to make a living are contemplating repatriating to the Eastern Cape. Rose Makosa, who has lived in the township for more than 20 years, wants to return to her ancestral home to work with young people.

Looking over the 400m² plot she cultivates with her colleagues from the Sakhulwazi Women’s Organisation, she says: “This is not farming. In the Eastern Cape there is a lot of land that we can use. There are huge tracts of land where our fathers used to plant. Those children [living there now] may as well learn to be farmers.

“If we can get a government contract we can supply prisons, orphanages and hospitals with our produce. Then we can begin to reverse urbanisation, which has only succeeded in turning our youth into criminals.”

In a good month the garden generates about R3 500, which is distributed among the organisation’s 10 members, who also make beads to earn extra income.

But good months have been evading Makosa and her colleagues recently. When Makosa — the only one in the group who has received horticultural training — recently went on a six-week trip to the Eastern Cape, she came back to an unkempt garden, which suggested that her colleagues’ strengths lay more in beadwork than agriculture. Part of their crop failed because of a pest problem that they were ill-equipped to handle.

Makosa says she has appealed to the group’s sponsor, the non-profit organisation Heart’s project, called FoodTents, to assist urgently with the problem. “People get demotivated because they have to wait so long for a harvest,” said Shaun Cairns of FoodTents, which sponsored the group with its patented protective covering. It has taken over the site and turned it into a “grow zone” where it plans intensive training sessions to assist potential small-scale farmers to turn a profit from the crops they produce.

The protection afforded by the food tents, which cushion plants from the harsh elements, helps farmers to reduce the impact of inclement weather on their crops. They could, in the future, in other contexts across the region, help mitigate the effects of climate change and water shortages.

Covid-19 draws the bulk of health sector’s focus, at the expense of children