Eviction appeal gets Concourt all fired up 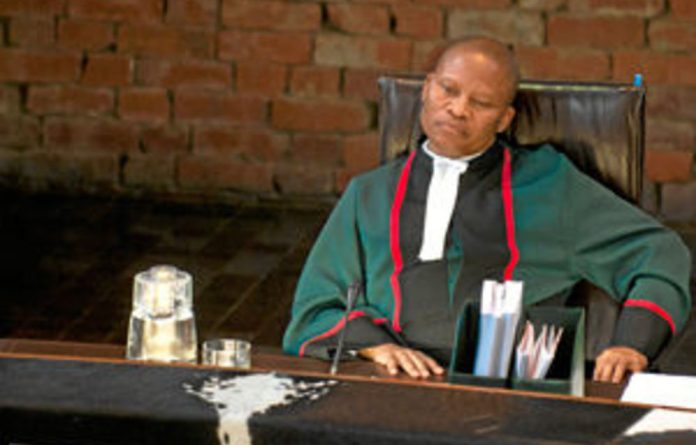 Tuesday was newly appointed Chief Justice Mogoeng Mogoeng's first day back at the office — but now he is sitting in the Constitutional Court's most venerated seat.

Photographers' cameras whirred to every movement of the nine presiding judges and even whispers of body language were analysed for hints of a shifting balance of power.

The proceedings themselves were described by Justice Johan Froneman as the "rather unedifying spectacle [of] watching the different spheres of government trying to put the responsibility [to provide alternative accommodation for evicted residents of the Itireleng informal settlement] on someone else".

Residents of sections of Mooiplaas and Skurweplaas in Itireleng had applied for leave to appeal a 2009 North Gauteng High Court eviction order that would leave several hundred families homeless.

Mogoeng spent most of the day shifting around in his new hot seat, while the more experienced justices appeared inclined to defend the Concourt's reputation by doing what they do: being brilliant jurists.

And it was a compelling case, tackling urbanisation, the rights of private landowners and the right to housing.

Resident Gloria Ndimane, who has been on a housing waiting list since 1995, told the Mail & Guardian Mooiplaas was a squatter camp "pregnant with people". "It is overcrowded and we have nothing: no water, electricity and we dig a hole in the ground when we have to go to the toilet," said the single mother.

As Itireleng expanded, squatters spilled over from land expropriated by the municipality to land owned by the PPC cement company, but they were evicted in 2009. Many moved to a neighbouring property owned by Golden Thread Limited. Another court-sanctioned eviction resulted in them moving again to another plot of land, owned by PPC.

Called upon to adjudicate a matter that involved the "trilateral relationship" between the private landowners of the two separate plots, its illegal occupiers and the government — which earlier Concourt judgments had established had a constitutional obligation to provide alternative accommodation to evictees — some of the justices appeared unimpressed with submissions from the third of these parties.

Competency of local government
The City of Tshwane had argued that providing alternative housing for evicted squatters was not a competency of local government. Although it had not appealed against one of the two high court rulings that compelled the government to provide accommodation and had previously indicated it would need 18 months to comply, it now admitted it was unable to do so.

The municipality was flagrantly in contempt of court, the municipality's "attitude" showed a "disrespect for the legal system unseen in these courts", Justice Johann van der Westhuizen said.

Tshwane pleaded a lack of finances and other municipal infrastructural projects that needed attention first. But it also emerged that the municipality had applied to the wrong government department — land affairs and rural development rather than human settlements — for funding to accommodate the squatters.

Such bumbling and disregard for the "poor on the fringes of our cities" only fired up Van der Westhuizen and Froneman, as it did Deputy Chief Justice Dikgang Moseneke, who asked the municipality's counsel, Johan Botha, whether his clients were "suggesting that the homeless are totally last on the list of duties of a municipality".

"Why must they tar roads and put up Christmas lights or whatever before they must provide homes for poor people?" the deputy chief justice inquired.

Representing the Gauteng department of human settlements, Terry Motau SC told the court that municipalities needed to liaise with provincial government more swiftly on these matters and called for a two-year adjournment to allow the state to get its affairs in order. Grilled on whether the provincial government could assure the court that a resolution would be reached at the end of such an adjournment, Motau admitted it couldn't.

Nelly Cassim SC, for the national minister of human settlements, also wanted a two-year postponement. She submitted that the provision of emergency housing was within the competency of local government.

Because "administration and implementation were happening at municipal level — [the national department] can't do anything [so] we sit back and wait", Cassim said.

This drew the thunderous ire of Justice Zak Yacoob, who said he "would have thought that a joint co-operative effort" among spheres of government would have been the optimal approach to alleviating the community's distress.

Moseneke noted that the bickering among spheres of government was an "unseemly spat" in which government's failings translated into "this community [being left] stranded in a veld that is owned by somebody else".

He later wondered: "What practical, procedural jurisprudence should we develop to ensure private landowners aren't left to watch this spat?"

Clearly, Froneman, Moseneke, Van der Westhuizen and Yacoob had come out swinging. It was as if, on this first day on the job for a chief justice whose jurisprudential record and sympathies towards the executive have elicited public scepticism, they felt compelled to prove that the Constitutional Court remains a space where independence, intellectual rigour, concern for the poor and the rule of law remains paramount.

The case is continuing.

There’s a backlog of by-elections to get through before next year’s local government elections. Will voters go to the polls even though Covid protocols are in place?
Read more
National