Zambia tense as votes are counted 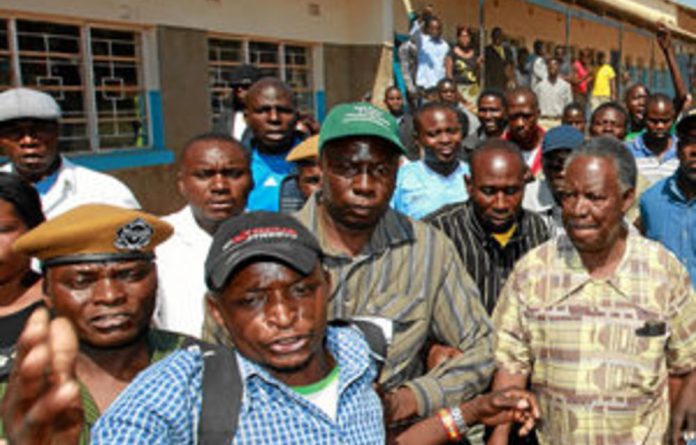 Zambia’s main opposition appeared on course for a convincing victory over the ruling party on Thursday, following an election marred by disorganisation and sporadic violence.

By Thursday morning the Patriotic Front (PF), led by Michael Sata, had 46.59% of the vote, while Rupiah Banda’s ruling Movement for Multiparty Democracy (MMD) was trailing in second place, with 33.82%.

In third place was Hakainde Hichilema of the United Party for National Development, with 16.41%. The other seven presidential candidates shared less than 2% of the remaining votes.

These figures were drawn from the tabling of results from 33 of 150 constituencies. But the pro-Sata newspaper, the Post, using unofficial figures collected from totalling centres, declared that the PF had 59% of the vote (and the MMD just 32%).

The front page story — which also claimed that the MMD had put the army on alert and had sealed the borders — was printed in spite of a high court injunction late on Wednesday barring the paper and a private television company from speculating about the results.

PF secretary general Wynter Kabimba told the Mail & Guardian that the party stood by the figures and accused the MMD of delaying the results in order to cook the numbers. “These delays are unprecedented,” he said. “They are withholding the announcements deliberately for their own ends. If the ruling party had been winning, we would know all the results by now.”

The PF has made an official complaint to the Electoral Commission of Zambia (ECZ) about the delays. Meanwhile, the commission’s website was shut down after errors appeared in the tabling of results, at one point claiming 133 constituencies had been counted, when in fact the number was only 33.

Tuesday’s vote ran smoothly in most areas, but in a handful of places in the capital, Lusaka, materials arrived late at polling stations, causing frustration among voters, some of whom had been queuing since 3am. Rumour spread among the mainly PF-supporting residents that the vote was being rigged. In the township of Kanyama the M&G saw stick-wielding youths charging at police and piles of rubbish being set on fire.

For several hours, the police stood by as the mob went on the rampage, tearing down MMD posters and destroying a metal billboard which had shown the face of Banda. Elsewhere in the capital cars were smashed and a minibus was torched, severely delaying voting. One station opened only at 4pm, eight hours after the scheduled 6am start.

The voting booths that opened late stayed open longer, delaying the counting, which was also slowed by technological failure and the sheer exhaustion of electoral commission agents, some of whom had been in the voting booths for nearly 36 hours without sleep.

ECZ chairperson Irene Mambilima brushed off criticism of the delays, blaming local agents for failing to follow procedures. She also told reporters that there was no evidence to support claims by the PF that the vote had been rigged and urged the media to refrain from “publishing untruths and falsifications”.

The Southern African Development Community electoral observer mission released a preliminary statement on Thursday announcing that the election was “credible and conducted in accordance with the relevant electoral laws of Zambia and adhering to regional and international standards”.

It joined other international observer missions in playing down the voting-day violence and said the polls had been “generally peaceful and orderly”. As the results trickled in, Zambians remained glued to their television sets and Lusaka’s busy roads were quiet, with many staying away from work to follow developments.

There was a heavy police presence outside the Mulungushi International Conference Centre, where the results were being correlated, and expatriates living in Zambia were instructed to stay at home in case of further violence.

This year’s election was the most closely fought in Zambia’s history, with Sata making his fourth attempt to enter State House. He lost by only 35 000 votes to Banda in the 2008 by-election (following the death of former president Levy Mwanawasa). The MMD has ruled Zambia since 1991 when the country adopted multiparty democracy.

With a booming economy, a vibrant political scene and corruption on the boil, we examine Zambia in the run-up to their national elections in September. For news and multimedia on the elections view our special report.