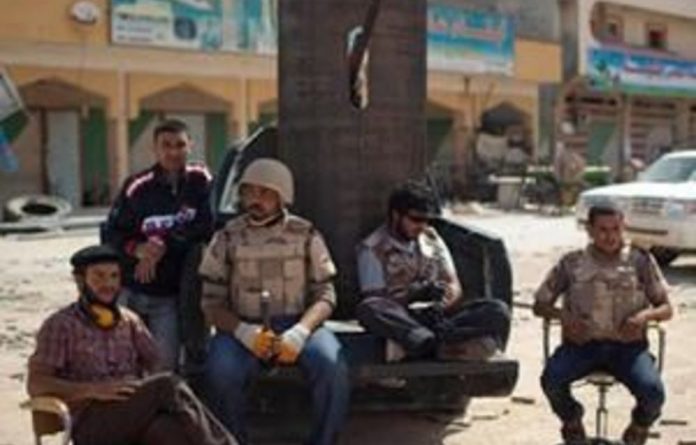 Streams of civilians fled Muammar Gaddafi’s besieged home town of Sirte on Sunday while the International Committee of the Red Cross (ICRC) warned of a medical emergency and the battle for the fugitive strongman’s bastion raged on.

An Agence France-Presse reporter at a mosque field hospital west of the city said hundreds of Sirte residents were fleeing in packed vehicles with some people even sitting on top of possessions piled high in the rear of pick-ups.

“There are so many rockets now. Yesterday [Saturday] there were a lot of attacks. We just could not stay any longer,” Ali Faraj said as a National Transitional Council (NTC) fighter checked his identity and those of women and children crammed into his car.

An ICRC team, which delivered desperately needed supplies to medics in the besieged coastal city on Saturday, said the hospital had come under rocket fire as new regime forces stepped up their assault on Gaddafi diehards.

A large force of NTC fighters pushed in from the south to lay siege to the Ouagadougou Conference Centre, a showpiece venue close to the Ibn Sina Hospital where Gaddafi hosted the launch of the African Union (AU).

Intense exchanges raged for at least two hours despite pleas from the Red Crescent for a lull while the Red Cross team made its delivery, NTC fighters said.

Staff at the Ibn Sina Hospital told the team that “because of lack of oxygen and fuel for the generator, people are dying”.

Other wounded or ill people cannot get to the hospital because of the fighting and Nato air strikes, Khadhraoui added.

“Several rockets landed within the hospital buildings while we were there. We saw a lot of indiscriminate fire. I don’t know where it was coming from,” he said.

Ferocious attacks
After the ICRC team went in, NTC fighters launched a ferocious attack with rockets, anti-tank cannons and machinegun fire from a position less than a kilometre from the hospital.

“We were surprised” that the attack took place while the team was visiting, Khadhraoui said, adding that they had “contacted all parties to say we were going in”.

The hospital’s water tower was hit, forcing staff to bring in water from outside, he said.

In the east of Sirte on Sunday, NTC fighters returning from the front said they had captured a neighbourhood in the south west of the city which was home to many Gaddafi clansmen.

“Ninety-five percent of Buhadi is under our control,” fighter Drisi Mayar said.

“This was a stronghold of Gaddafi. A lot of his relatives and clan members lived there. There was a small military base. We took control yesterday [Saturday]. We had small clashes but it is under our control.”

Fleeing hoards
Hundreds of vehicles also streamed out of Sirte on the eastern front during a lull in fighting on Sunday.

One man leaving with his family who gave his name only as Muftah said, “The situation is absolutely pathetic, especially in the hospitals. We have no oxygen, no medicines. Wounded people die even before reaching the hospital.

“Many people have broken open the pharmacies in the city to bring medicines to the hospital but even that is exhausted now.”

The ICRC had been trying for weeks to enter Sirte which has been under siege by NTC forces since the middle of last month.

It had sought to bring medical supplies in by boat but abandoned that idea because of security concerns. Sirte’s port is now in the hands of NTC forces and there has been fierce fighting around it since its capture.

Khadhraoui’s team on Saturday included a doctor, a first aid medic and a logistician, he said. It delivered about 150 body bags and 300 “war wounded kits” consisting of drips, drugs, gauze and other medical equipment.

The team did not tour the wards or carry out a full assessment of the hospital’s medical needs but hopes to return soon to bring in more supplies. “Oxygen is the main thing they asked for,” Khadhraoui said.

Indiscriminate bombings
Some of the hundreds of residents fleeing Sirte said there had been civilian casualties when residential buildings were hit, either by artillery fire from besieging new regime forces or by Nato air strikes.

“I left with my family as we are caught between Nato bombings and shelling by rebels. Nato, in particular, is bombing at random and is often hitting civilian buildings,” a man who gave only his first name, Ali, said.

A rocket killed two children on Saturday when their family joined the desperate exodus.

The two children killed “were torn to pieces,” said Ahmed Abu Aid, a field medic on the western side of Sirte. “They collected the body parts in bags.”

Redwan Abdulrahim, his small truck piled high with suitcases and other possessions as he drove out on the coast road to the west, said the situation in Sirte had become intolerable.

“It was really bad. We didn’t know where the bullets and rockets were coming from.”

Lost missiles
At least 10 000 missiles are unaccounted for in Libya, a senior Nato official admitted according to a German media report on Sunday, amid fears the weapons could fall into the hands of al-Qaeda.

News weekly Der Spiegel reported on its website that Admiral Giampaolo di Paola, who chairs the committee of Nato military chiefs, held a secret briefing for German MPs on Monday, in which he expressed the alliance’s concerns.

The weapons could end up in other countries and in the wrong hands, the admiral said, according to Spiegel, “anywhere from Kenya to Kunduz” in Afghanistan.

The reported comments echoed remarks made by a military official of Libya’s new leadership on Saturday.

General Mohammed Adia, in charge of armaments at the defence ministry, told reporters that “about 5 000” SAM-7 anti-aircraft rockets were missing.

“Unfortunately some of these missiles could have fallen into the wrong hands … abroad,” the general told reporters at a former arms depot of Gaddafi in Benghazi.

The United States has said it is working closely with Libya’s new interim leaders to secure arms stockpiles amid concerns over weapons proliferation.

The US State Department has provided $3-million to help destroy weapons. — AFP