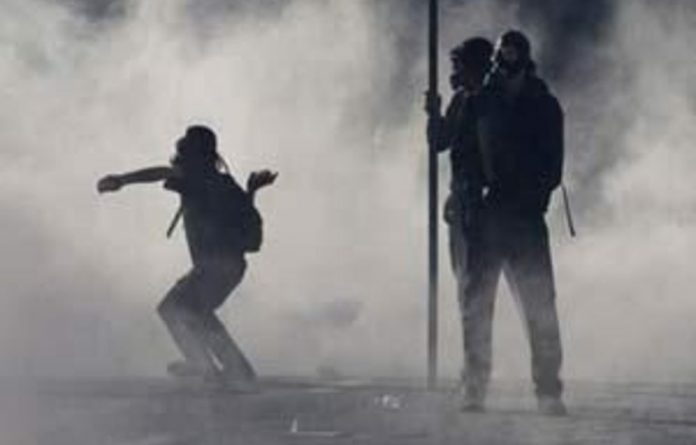 Greek protesters marched on Parliament on Thursday, raising the prospect of more violence in strikes against austerity measures Parliament is poised to approve to try to stave off bankruptcy.

Deputies are expected to give a final green light to the belt-tightening plan required by the European Union and International Monetary Fund after a first reading on Wednesday, when protesters pelted police with petrol bombs and chunks of marble.

But at least two ruling party MPs have said they might vote against one of the Bill’s provisions, threatening to weaken the government’s narrow majority as it battles a debt crisis that is shaking global markets.

Early on Thursday, Sofia Giannaka, a potential rebel deputy, indicated she would probably vote in favour of the provision, which suspends some collective pay accords, but she said she would not accept any more major cuts.

“There will be no next time,” she told Greek radio.

The government’s majority of 154 seats in the 300-member Parliament is expected to see the Bill through but any defections would be embarrassing as Athens struggles to convince international lenders to continue their support.

Prime Minister George Papandreou has appealed for support before a European Union summit on Sunday where leaders are hoping to set the outlines of a new rescue plan intended to stave off bankruptcy for Greece and stop the crisis spreading to other eurozone countries.

Analysts expect the protests to continue, with Greeks increasingly angry at measures they feel only hurt the poorest while tax evaders and corrupt politicians are unaffected.

“People sent a message on Wednesday that they have reached their limits and can’t take any more austerity,” said Theodore Couloumbis of the Eliamep think-tank.

“But these kind of protests cannot topple the government,” he said. “I don’t see this happening now.”

Running battles
Running battles between black-clad demonstrators and riot police on Wednesday left streets in central Athens covered with smouldering rubbish and lumps of masonry hacked off buildings in a repeat of clashes seen in anti-austerity protests in June.

The violence overshadowed the first day of the 48 hour strike that shut down much of the country and brought at least 100 000 people to the streets of the Greek capital to protest against the latest package of cuts.

Ministries, schools and other public buildings will be shut, transport services will be severely restricted and hospitals will be running on skeleton staffing, while many shops will also be closed.

Thousands of police will be deployed through central Athens.

“The protests will shake the government again, they will feel like an earthquake,” said Ilias Iliopoulos, secretary general of public union Adedy.

Stuck in its third year of deep recession and immobilised by a public debt pile amounting to 162% of gross domestic product, Greece is trapped between international lenders demanding tougher action from the government and growing public anger over the cuts.

Protesters are set to rally in front of Parliament from 8am GMT and will try to stay on the square till late at night, while lawmakers vote on the Bill.

The Bill foresees an average wage cut of about 20% for public sector workers, bringing total income losses since the crisis started two years ago to about 40%, and reduces the tax-free income threshold.

It will make it easier for firms to cut payroll costs by reaching company-level wage agreements, which has particularly angered some ruling party lawmakers.

Papandreou will hold a Cabinet meeting at around 9am GMT, before the parliamentary vote. — Reuters