Respite from a silent world 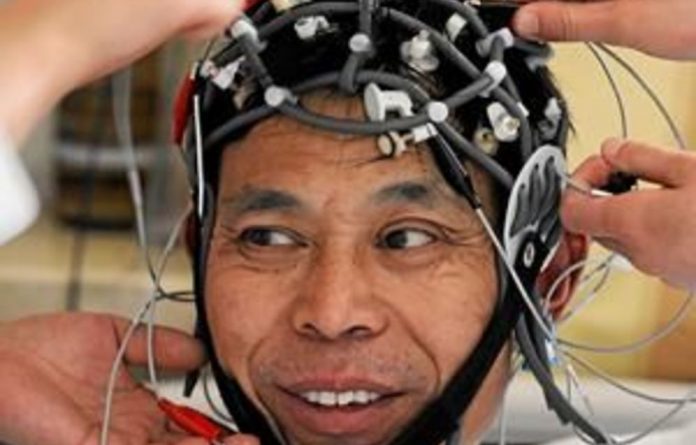 Patients previously believed to be in a vegetative state have responded to basic questions through the use of a portable bedside brain scanner, raising hopes that in future they might be able to communicate with family and friends.

Among 16 patients at Addenbrooke’s Hospital in Cambridge, eastern England, and at University Hospital in Liege, Belgium, three people who were previously thought to be without consciousness were able to respond to someone asking them to imagine clenching their right hand or toes.

Scientists have already demonstrated responsiveness in some people in a vegetative state through the use of a highly specialised and expensive fMRI — functional magnetic resonance imaging — scanner.

But the logistical difficulties, expense and specialised nursing care involved in transporting people to the few hospitals that have such machines mean it is not practical in every case and could certainly not be used on a regular basis.

But Professor Adrian Owen and Damian Cruse from the University of Western Ontario in Canada, who ran the study, said that a relatively cheap and portable EEG (electro-encephalography) device that can be taken to the home could transform the prospects for such patients.

“The future for us is to try to develop a technology for allowing some of these patients to actually communicate in a relatively routine way with the outside world, using technology that is more economic and portable than the fMRI,” said Owen.

Their study, published in the Lancet journal, explains the experiments with the EEG device — a network of electrodes placed on the scalp that detects brain activity. All 16 patients had been diagnosed using the official criteria for a vegetative state; five of them had been affected because of an accident.

In three of the vegetative patients, the brain activity patterns detected on a computer were the same as those in most of the healthy patients.

Interestingly, there was no response from some of the healthy patients, who found it hard to imagine the movement of their hand and toes, as well as from the majority of the vegetative patients. This suggests that the technique cannot be used to rule out consciousness entirely.

The team found that just less than 20% of the vegetative patients had sufficient consciousness and motivation to be able to show that they were aware of what they were being asked. The earlier fMRI study got the same result in 17% of patients.

Owen and Cruse said they had no idea of the number of patients wrongly thought to have no consciousness. The portable device, which facilitates getting to patients who cannot be moved, would let them assess more people, they said.

The pair said they were “getting really excited about the ­possibility of brain-computer interface”, which would allow patients to communicate, if just in a quite basic way. If electrodes on the scalp could pick up signals from brain activity, they could be used to power a computer cursor.

“It is not realistic to imagine somebody living the rest of their life in an fMRI scanner to communicate with the outside world,” said Owen.

But the EEG could conceivably be used in the home.

“All the technical and scientific building blocks are in place,” he said.

There is still some distance to go before friends will be able to communicate with patients, however. It takes a long time to analyse the data from the brain scan.

The doctors said the breakthrough was ethically challenging. It would be difficult to know the inner world of somebody in a vegetative state, and the ability to answer yes or no to a question might not indicate a capacity to consider a complex issue such as whether life was still of value.

Owen has already investigated whether it is possible for vegetative state patients to answer yes-no questions requiring thought or memory. Using the fMRI machine, he and his team asked patients to think of playing tennis for “yes”, and of moving round their house for “no”. Tennis is a motor activity, but wandering through rooms activates a part of the brain devoted to spatial awareness. Patients were also able to respond correctly when asked questions such as their father’s name and given three options. —

Attempts to avert HIV are off target

How technology can give Olympics a winning edge

US grapples with neglect of HIV