Gbagbo flies to the Hague to stand trial for Ivorian abuses 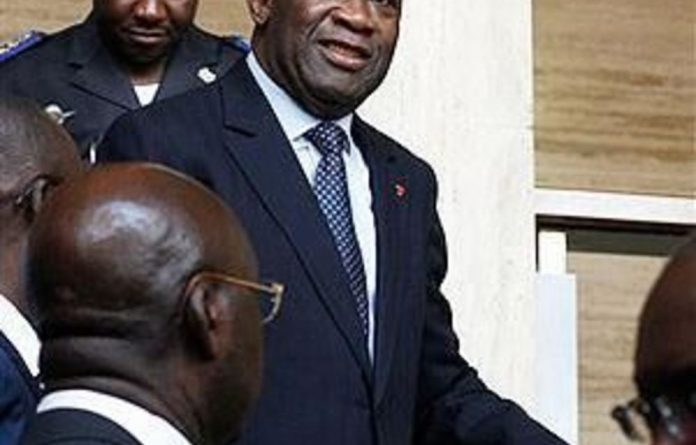 Côte d’Ivoire’s former leader Laurent Gbagbo has landed in Rotterdam, en route to the International Criminal Court (ICC), where he faces charges of crimes against humanity, for acts allegedly committed after a disputed presidential run-off election between the former president and his challenger Alassane Ouattara plunged the country back into civil war.

A plane carrying Côte d’Ivoire’s Gbagbo landed at Rotterdam airport early on Wednesday morning as he headed for transfer to the International Criminal Court, the ANP news agency reported.

The plane, from the Côte d’Ivoire, touched down a little before 4am (3am GMT), ANP reported. From there, Gbagbo is to be taken into detention at ICC facilities in The Hague.

The former president of Côte d’Ivoire, Gbagbo, is the first ex-head of state to be taken into custody by the International Criminal Court.

Gbagbo was told at his secluded place of detention in northern Côte d’Ivoire on Tuesday that a warrant for his arrest had been issued by the ICC, which immediately began his transfer.

Human rights abuses
The ICC is investigating killings, rapes and other abuses committed during the four-month conflict triggered by Gbagbo’s refusal to cede power to Ouattara, whose victory was recognised by the UN and other international bodies.

Ouattara’s French-backed forces deposed Gbagbo in April, ending a struggle that killed 3 000 people and displaced more than a million.

Bourthoumieux said Ivorian justice authorities showed Gbagbo the arrest warrant on Tuesday morning in the northern town of Korhogo, where he has been under house arrest for the past seven months.

A decision to try Gbagbo at the ICC would be all the more controversial for many Ivorians after ICC chief prosecutor Luis Moreno-Ocampo said this month that Libya could try Muammar Gaddafi’s son Saif al-Islam at home, despite an ICC arrest warrant against him for crimes against humanity.

‘Major step toward justice’
But Human Rights Watch (HRW) welcomed the decision as “a major step toward ensuring justice”. Elise Keppler, senior international justice counsel at HRW, said: “This is a big day for the victims of Côte d’Ivoire’s horrific post-election violence. That Laurent Gbagbo now has to answer to the court sends a strong message to Ivorian political and military leaders that no one should be above the law.”

Gbagbo is the first former head of state taken into custody by the ICC. President Omar al-Bashir of Sudan and the late Libyan leader, Muammar Gaddafi, have likewise been subject to ICC arrest warrants, but neither has come into ICC custody.

Keppler said: “The ICC is playing its part to show that even those at the highest levels of power cannot escape justice when implicated in grave crimes.”

HRW also called on the ICC prosecutor to move swiftly on investigations for grave crimes committed by forces allied with Ouattara. It said domestic prosecutors have charged more than 120 people linked to the Gbagbo camp with post-election crimes, but none from the pro-Ouattara forces.

Election boycott
The climate in Côte d’Ivoire is already tense, with Gbagbo’s FPI party boycotting legislative polls next month in protest at the detention of FPI officials in connection with alleged crimes committed during the conflict.

Like his election loss, Gbagbo’s indictment should prove divisive, although militiamen who backed him during the poll dispute have largely fled, been disarmed or are in hiding, so are unlikely to be able to cause much trouble.

Gbagbo’s spokesperson, Justin Kone Katinan, said: “This is a very serious deed by the ICC, wanting to transfer Gbagbo. It is a serious deed that Ivorians will not accept.”

Jack Koutouan (67) a retired insurance salesperson from the predominantly pro-Gbagbo neighbourhood of Yopougon, called the move by The Hague “an abuse of the law”.

He told the Associated Press: “Are we not an independent country? Here we have judges that can judge our citizens. What good come out of transferring him to The Hague? That makes it look like we are incompetent. It’s an indignity on our part, we as Africans.”

Loyalists alienated
Tom Wilson, senior Africa analyst at Control Risks, a political risks consultancy, said: “The ICC warrant saves Ouattara from the difficult job of having to try Gbagbo in Côte d’Ivoire. But by letting him go he risks upsetting Gbagbo loyalists, whom he needs to appease to maintain stability.”

The ICC plans to focus on two to six people thought most responsible for atrocities, the prosecutor Moreno-Ocampo said during a visit to the country last month.

He stressed the court would only investigate crimes going back to the election, the first round of which was last October, and not those committed earlier, during the crisis that followed a failed 2002 rebellion against Gbagbo that split the country. Gbagbo’s camp have rejected that time limit as unfair.

The ICC is currently handling 11 cases, including the 2008 post-election violence in Kenya, alleged war crimes committed in the Central African Republic, and alleged genocide in Sudan’s Darfur region. —