Rasool’s massage of the media 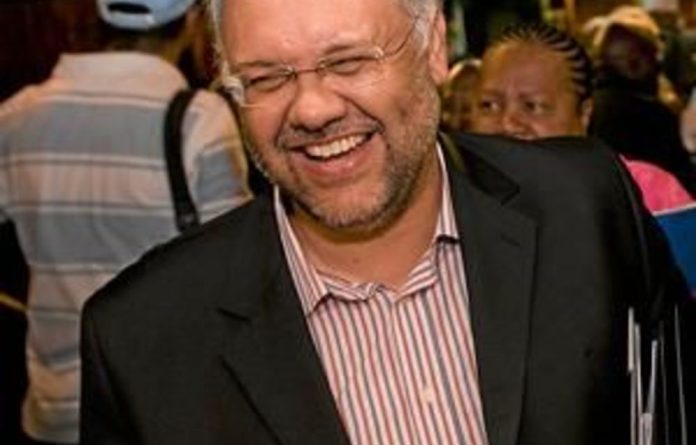 Companies linked to the Cape Argus‘s disgraced “brown envelope” journalists benefited to the tune of almost R53-million — R10-million more than initially admitted by the Western Cape government — in provincial contracts between 2004 and 2009, government documents leaked to the Mail & Guardian show.

Aranes and Smith resigned from the Cape Argus after persistent allegations that they had waged a campaign in support of former Western Cape premier Ebrahim Rasool in the newspaper in exchange for cash in “brown envelopes” and contracts.

According to Smith’s public admission of guilt, he met Rasool, now South Africa’s ambassador to the United States, at Leeuwenhof, the premier’s official residence, “within two hours” of resigning from the newspaper in 2006 and that Rasool promised to “take care” of him.

The conduit for that “care” appeared to have been Hip Hop, in which Aranes, Smith and another partner, Zain Orrie, acquired shares.

The M&G has also seen a forensic report by Brent Gerber, director general in Western Cape Premier Helen Zille’s office, suggesting a “reasonable suspicion” that Smith, his partners at Hip Hop, another firm called Inkwenkwezi Communications, Rasool and members of his cabinet “are guilty of one or more offences” under the Prevention and Combating of Corrupt Activities Act.

Lynne Brown, who replaced Rasool as premier following his sacking in 2008, had previously stated in the Western Cape legislature that provincial departments spent R44-million over 30 months with Hip Hop.

Rasool and his allies
The largest chunk of that business, R25.6-million, came from the department of transport and public works between July 2006 and May 2009, followed by R23.8-million from Rasool’s office. The transport department was headed by Rasool’s ally, Marius Fransman, who is now the ANC’s provincial chairperson.

In 2009, the M&G revealed evidence that Aranes and Smith had received compensation from Rasool and the Western Cape government after the taped admission of a Hip Hop director, Vukile Pokwana, to Brown was leaked to the newspaper.

The scandal was again in the news this week after the Western Cape High Court ordered the ANC to provide two internal reports dealing with the matter to the Cape Argus. The newspaper had argued under the Promotion of Access to Information Act that its reputation was at stake and the right of media freedom should allow access to the material — “a report of an inquiry conducted by the ANC into the ‘brown envelope journalism’ scandal” and a report submitted by Western Cape ANC members “sent to the ANC’s head office, with words to the effect of ‘Why Rasool had to be asked to resign'”.

The inquiry report, compiled in 2005 by Andries Nel, then the ANC’s deputy chief whip in the national legislature, is said to focus on the infighting in the Western Cape ANC between an “Africanist” faction led by Mcebisi Skwatsha and those loyal to Rasool.

According to ANC members who gave evidence to Nel, the report also focused on Rasool’s alleged role in the brown-envelope scandal. A Western Cape ANC member who testified said it was “very odd that the Nel commission completed its work and no one heard anything about it afterwards”.

It was suggested that the report was kept under wraps by former ANC president Thabo Mbeki to protect Rasool in exchange for his faction’s support at the party’s 2007 conference in Polokwane.

The Gerber report appears to corroborate Smith’s admission of guilt, stating that “Rasool and/or Fransman and/or Ramatlakane and/or others associated with them arranged [for Inkwenkwezi Communications and Hip Hop Media Lounge] to be contracted to perform lucrative work for provincial government as gratification for their help in — promoting the cause of Mr Rasool and his allies in the ANC.”

Closed tender
The documents from Rasool’s administration outline how Inkwenkwezi won provincial government contracts that were dubiously massaged through supply-chain management processes. These include memos signed on March 14 2005 by Xolani Tyilana, communications director in the department of local government and housing, and Laurine Platzky, its acting head, asking for approval to appoint a media strategy and communications consultant and for a closed tender for a six-month, R300 000 contract.

The closed tender meant that Inkwenkwezi, of which Smith’s wife, Joy van der Heyde, was a director, would be the only candidate. At the time, Smith and Aranes still worked for the Cape Argus.

Another memo of March 30 2005 from Platzky to her principal, Fransman, noted that the departmental bid committee, following a special meeting on March 23, “did not recommend the approval of the only bidders for the tender [Inkwenkwezi] because the 48 hours advertisement period cannot be vindicated and cannot be approved”.

The committee also noted that “the deliverables are not spelt out in any detail” and that “the terms of reference is very vague”.

Platzky met Van der Heyde on March 29 and asked Inkwenkwezi for “further details on how they planned to fulfil [the department’s] needs”.

Gerber’s audit confirms that Inkwenkwezi was paid R200 000 under the contract and tried to bill the province for a further R100 000.

He said “new evidence had been found corroborating the existing findings” and that “no additional misspending has been identified”.

Rasool did not respond to questions sent to him by the M&G.

Platzky said there was nothing untoward in her actions because there had been an “urgent” need to communicate the government’s new housing policy and that “time started getting ahead of us and the pressures in both community and international arenas were mounting”.

“We eventually put out a call and said, as was often the case, we would be satisfied if three respondents could be compared.”

With one company pulling out and a second not responding, Inkwenkwezi was the only remaining bidder. Platzky added that she had interviewed Van der Heyde “thoroughly” and that “capping the budget” and contract time frame was an adequate precaution.

National Prosecuting Authority spokesperson Mthunzi Mhaga said no decision to prosecute had yet been taken because the Hawks were still investigating the case.

Fransman said the allegations in the Gerber report were a “clear case of the DA [Democratic Alliance] grasping at straws” to deflect attention away from allegations of impropriety the party was facing.

He said the investigation amounted to “an abuse of provincial government resources” and that there was “nothing untoward” in the tenders his department had awarded to Hip Hop.

Ramatlakane, now a Congress of the People MP, said allegations that funds for a pro-Rasool media campaign were channelled through the community safety department when he was its MEC were “nonsensical” and politically motivated.

Aranes refused to answer the M&G‘s questions. “Go ask your editor, Nic Dawes; he knows the story,” he said.

Smith could not be contacted and Tyilana did not respond to questions emailed to them.