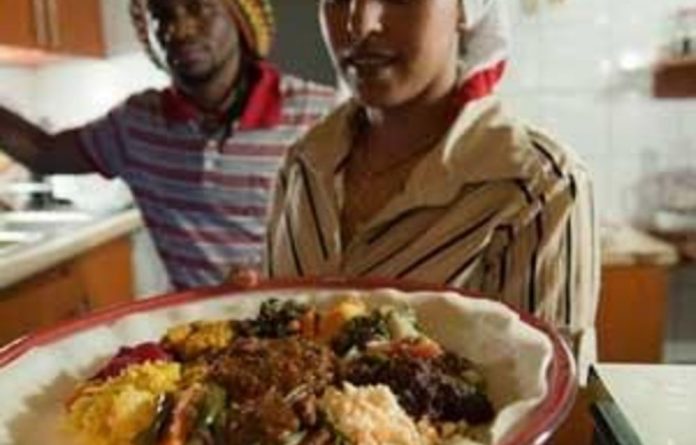 According to the United Nations High Commission for Refugees, there are officially 34?100 Ethiopian refugees and asylum-seekers in South Africa.

Ethiopia proves how poor an indicator of general wellbeing the gross domestic product can be. For the past decade it has had among the highest sustained growth rates on the continent but life in one of the most beautiful countries with one of the richest histories in Africa is unsustainable for many.

Journalists who point out the bad news — including members of the foreign press — have been arrested under anti-terrorism laws.

According to the New York-based Committee to Protect Journalists, Ethiopia is the continent’s leading jailer of journalists and has driven more journalists into exile than any other country in Africa. Hopefully food critics are exempt, although I wouldn’t count on it.

No surprises then at the number of new Ethiopian restaurants enriching South African food culture.

Thanks to Ethiopia’s distinctive cuisine, Ethiopian restaurants are found all over the world, from Tasmania — the Axum Ethiopian Restaurant in Hobart — to Alaska — Tekul in Fairbanks, run by the great-great-grandson of Emperor Haile Selassie until it collapsed under snow. The story of the latter is told in Harry Kloman’s book Mesob across America.

The most well-known Ethiopian restaurant in Cape Town is Addis in Cape, opened by Senait Mekonnen in 2007. There are now at least another four eateries in the city’s CBD inspired by the cuisine of the Horn of Africa.

Edible tablecloths
For those who don’t yet know, injera is the staple dish, a slightly spongy, velvety sourdough flatbread. In Ethiopia it is exclusively made from teff — the smallest food grain in the world, almost gluten-free — and grown in the highlands. In South Africa, teff is usually substituted with rice flour to make injera batter. It is fermented for a day or two before use. The lack of gluten means bubbles form quickly as the dough heats in the pan, giving injera its characteristic porous top and smooth underside.

Ethiopian food is eaten without utensils. Instead, the injera forms an edible tablecloth about 50cm in diameter on which dishes and spices are upended. The method is to tear off a palm-sized portion. With the stippled side of the injera down, use your fingers like a mouth, capturing several samples of sauce and comestible with the injera, then scoop the parcel up into your chops.

The usual accompaniments for injera are berbere (a powdered mix of chilli and a large variety of other spices), kibe (a clarified butter) and wot (stews with sautéed chopped red onions and either beef, chicken, fish, lentils or vegetables).

In Lower Hout Street, an 1890s building has been given a makeover by a hotel chain with three properties in Addis Ababa. The Kings in Cape Hotel is somewhat African baroque, with gilded pillars, burgundy awnings, yellow walls, marble tile floors, bright-red glass chandeliers and gold-framed mirrors. The dining area where the hotel guests have breakfast is comfortable enough and well air-conditioned, though the semi-open breakfast kitchen looks a bit like one of those places Gordon Ramsay gives make­overs to on television.

The polite and friendly staff are not particularly well trained and language barriers present themselves.

There is a cigar bar upstairs and in the downstairs section, with walls padded with button-holed leather upholstery and low tables with couches, is the Sheba Restaurant serving injera.

Exotic atmosphere
A stone’s throw away is the labyrinthine Pan-African Market, still the best African market in town. On the second floor is the Timbuktu Café with alfresco seating on a wooden balcony overlooking Long Street. Here you do feel transported to a more exotic part of the continent.
The atmosphere is especially fabulous at night.

Carpet runners hang on the walls between the sash windows and there are iron chairs, bags of oranges, a crazy mishmash of pot plants and wooden figurines. People at the Timbuktu Café like to chat and lone visitors will soon find themselves embraced by conversation.

Wine at under R100 a bottle is plentiful. The menu has a range of Ethiopian dishes in the R50 to R60 range. Before you leave, go upstairs to the Chimurenga magazine offices and view the exhibitions.

But by far my favourite Ethiopian restaurant is Little Ethiopia, opened eight months ago by Yeshi Mekonnen from Addis Ababa. She serves a variety of dishes, but first-timers might want to try the beyeaynetu (a vegetarian-only selection), or the mahberawi, which includes the meat dishes of the day. Dotted around the injera are small portions of alicha (cabbage), potato, homemade cheese (a bit like cottage cheese but drier and more crumbly), beetroot, misir wot (lentils), berbere, tomatoes, onions, key wot (lean beaf with Ethiopian spiced butter) and gomen be siga (slowly cooked spinach with onions, beef and garlic).

A thoroughly charming and tiny restaurant that can feel busy with just six people, this is a great place for a romantic date or to take a group of friends and dine communally at the traditional low tables.