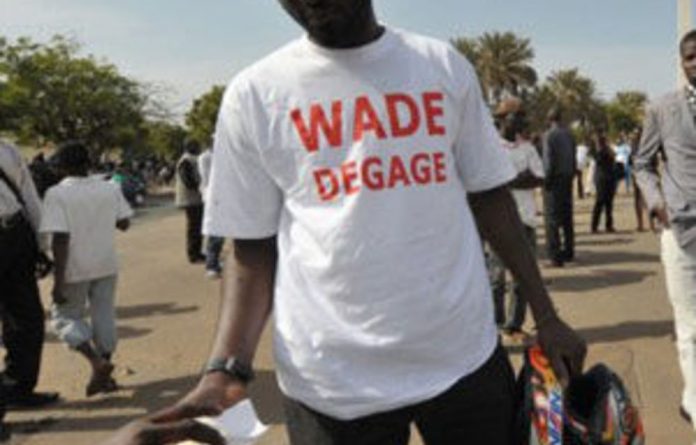 Police fired tear gas at demonstrators and killed at least one person on Tuesday in Senegal’s capital, where hundreds had gathered to protest a court ruling allowing the nation’s elderly leader to run for another term.

Private radio station RFM confirmed that a man was run over by the police’s armoured-personnel carrier. An Associated Press reporter saw the young man fall to the ground after the tank-like truck forced its way through the knot of protesters. Police launched their assault after demonstrators began chanting, “Palace! Palace!” indicating that they planned to march on the presidential palace.

Demonstrators are protesting a ruling by the country’s top legal body, the constitutional council, which validated President Abdoulaye Wade’s bid to run for another term in next month’s election.

Wade (85) is seeking a third term, even though the Constitution was revised soon after he was elected in 2000 to impose a two-term limit. Wade argues that the law is not retroactive and since he was already in office when it took effect, it should not apply to him.

Most peaceful nation
Clouds of tear gas hung over the Colobane, Fass and HLM neighbourhoods of the capital. Burning tyres could be seen at regular intervals, as well as overturned market tables. Besides the death of the young man, AP reporters saw four injured civilians, who were taken away on stretchers by paramedics.

Senegal has historically been the most peaceful nation in West Africa, a region that has been periodically rocked by military coups. By contrast in Senegal, the roots of democracy run deep and since independence from France in 1960, Senegal has never had a coup d’état.

The 2000 election that brought Wade to power after 25 years in the opposition was held up as a model because the former leader telephoned Wade to concede defeat — a gesture unheard of in Africa at the time.

RFM radio, owned by the pop star Youssou Ndour, reported the death of the young man, airing an interview with Dr Babacar Niang, head of Suma Assistance, the paramedic company that attempted to resuscitate him.

In the northern town of Podor on Monday, two other civilians were killed including a woman in her sixties after paramilitary police opened fire with live rounds. — Sapa-AP

Africa: On a human rights mission