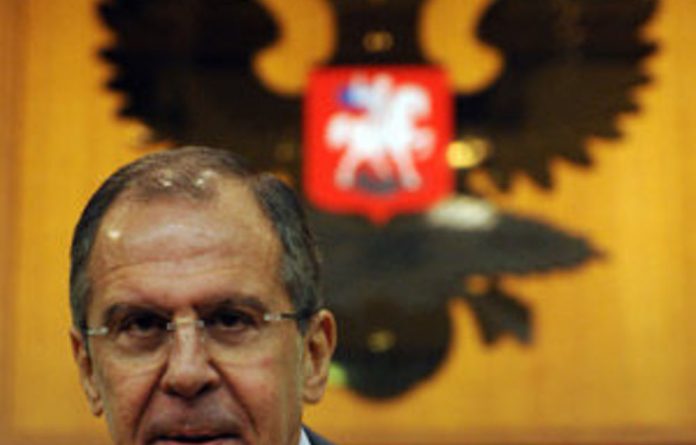 Russia said on Saturday that the Western-backed text of a UN Security Council resolution on the violence in Syria did not suit Moscow at all and warned of a “scandal” if that draft was brought to a vote.

“If they [the West] want yet another scandal on the Security Council for themselves then we cannot stop them” from putting the draft to a vote, Foreign Minister Sergei Lavrov told Russian television.

“The draft does not suit us at all and I hope that it is not put to a vote,” he added.

A diplomat at the United Nations said earlier that the UN Security Council will meet later on Saturday to vote on the resolution condemning the violent repression in Syria.

Lavrov gave the interview to Russian state television at a Moscow airport early on Saturday before heading to the Munich Security Conference, where he plans to meet US Secretary of State Hillary Clinton.

Resolution changes ‘well known’
He said that the changes Russia wanted to make to the resolution were “well known” and that he had already sent them to Clinton.

“There can be no doubt about the sense and the objectivity of these amendments. I hope that a prejudiced approach does not prevail over common sense,” he added.

Russia has repeatedly objected to the current text — introduced by Morocco and backed by Western powers — saying any resolution must make clear that it cannot be used to justify foreign military intervention in Syria.

Moscow is also vehemently against a call for President Bashar al-Assad to step down and opposes any arms embargo against Syria, which remains one of Russia’s prime weapons buyers.

Analysts have said that Russia is defying the West despite the escalating violence in Syria that has already left thousands dead as it fears al-Assad’s departure would cost Moscow its last remaining ally in the region.

The Kremlin appears to be seeking to prevent a repeat of the conflict in Libya where a Nato air campaign led to the ousting of its ally Muammar Gaddhafi and the loss of key arms contracts for the Russian weapons industry. –AFP