Moving from bland to blonde 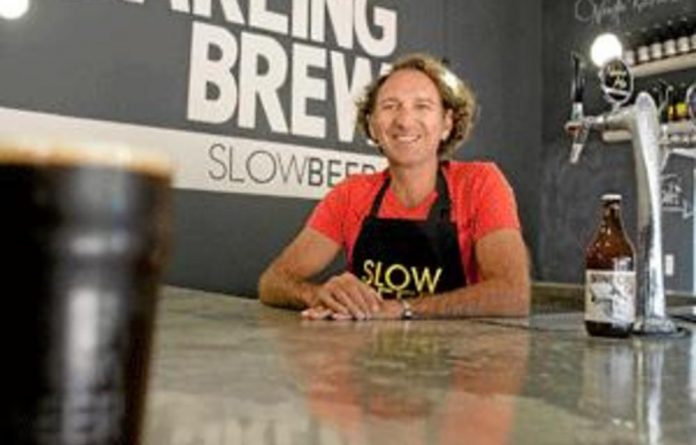 It was legendary music pioneer Frank Zappa who said: “You can’t be a real country unless you have a beer and an airline. It helps if you have some kind of a football team, or some nuclear weapons, but at the very least you need a beer.”

If one takes a glance at the television on a Saturday, it is easy to see how closely wound our national identity is with Castle Lager, especially when it comes to sport.

But how would foreigners judge South Africa based on its national beer, whether you believe that to be Castle Lager or Black Label?

The guess is poorly — and a number of South Africans seem to be in agreement as they seek alternatives to the industrially produced lager we have been force-fed over the years. Their alternative lies in the explosion of micro and craft-beer breweries, which have shot up around South Africa.

In 2000 South Africa had six microbreweries; in 2012 more than 35 are plying their trade. And South Africans are paying attention more than ever before as it has become easier to find microbreweries’ beer in liquor stores, restaurants and on tap in bars everywhere in the country.

“South Africans are looking for something different,” said Patrick van den Bon, a Belgian national who moved to South Africa in 1980. “They are getting sick and tired of industrial lagers that taste really bland.”

When Van den Bon arrived in South Africa, he “didn’t think much of South African beer” and began to brew his own beer at home in 1982.

Belgians and their beer
Belgium has a reputation as the most accomplished beer-brewing nation in the world, making it easy to see why Van den Bon began brewing his own beer when faced with an avalanche of tepid lagers here.

But the demand was overwhelming and Mitchell’s had to open a second brewery in Cape Town in 1989.

Today Mitchell’s is owned by Dave McRae and Allan Hodgson, who bought the brewery in 2002. McRae has worked at the brewery as a brewer since 1984.

Microbrewery on the increase
McRae said that in the past five to six years there had been a noticeable change in the market for microbrewery beer as more South Africans became aware that there were alternatives to SAB.

According to McRae, Mitchell’s now produces almost 50 000 litres a month, or almost 600 000 litres a year, but he wants to increase that figure to as much as one million litres.

This is still a pittance compared with SAB’s 3.1-billion litres a year in production capacity, but it is significant enough to make Mitchell’s one of the largest microbreweries in the country.

Mitchell’s now has a lot more competition, such as De Garve Brewery, established about four years ago in Vanderbijlpark by Van den Bon, who is the brewer while his wife, Goedele, runs the commercial side of things.

The De Garve Brewery was among the 27 micro and craft brewers that recently took part in the Clarens Craft Beer Festival, selling beers such as the Jolly Nun Belgian-style ale and Golden Blonde American-style ale.

In total more than 90 different beers and ciders were on sale at the festival, offering the inquisitive beer connoisseur a smorgasbord of new taste sensations.

Van den Bon brews 1 000 to 1 500 litres of beer a month, which he uses to supply as draft and bottled beer to a number of pubs in Vanderbijlpark, Parys in the Free State and Johannesburg. Sixty percent of his beer is bottled and the rest is sold as draft.

A De Garve pint retails between R24 and R28 and the bottled beers cost between R13 and R15 a bottle.

Van den Bon said there was definitely a big increase in demand for microbrewery beer, but it still remained a niche market.

Darling Brew in Darling in the Western Cape wants to grab a much larger slice of the beer market. Founded by Kevin and Philippa Wood in 2008, the brewery has made some nice inroads into the established beer market.

Kevin Wood said he knew nothing about brewing beer when he resigned from his corporate job of 20 years, but was determined to make it work. “It was like climbing a cliff without a rope.”

Wood said he and his wife had been picky about where their beer is stocked, whether it is in a liquor store, restaurant or pub. “We are relentless about promoting our beers in the right places.”

The first beers from Darling Brew went on sale in 2010 and in less than two years Wood has grown his brewery’s output to 30 000 litres a month, which places him among the larger microbreweries in South Africa. He has already set up a distribution network that gets his beers into bars, bottle stores and restaurants in Johannesburg, Durban, Pretoria, Cape Town, Paarl and the Garden Route.

In a liquor store the Darling beers sell for about R25 for a 550ml bottle.

Brian Stewart of Shongweni Brewery in KwaZulu-Natal said there had been a significant growth in the microbrewery sector, mostly driven by South African beer drinkers seeking a taste alternative.

“Craft brewers are busy taking market share away from the big breweries,” he said.

Stewart referred to the market in the United States, where there are now more than 2 000 microbreweries that have secured 10% of the national beer market.

“South African Breweries have been such a dominant force over the years,” said Stewart. “We can’t compete on price, but we can compete on superior product and a different taste sensation. People are saying there is life beyond a Castle or a Hansa.”

The Shongweni Brewery also works with restaurants, such as the Unity Brassierie in Musgrave, Durban, by developing custom-designed beers that can be sold on tap. In the case of Unity the brewery helped to develop the Cow Bell Pilsner, exclusively for the restaurant.

In a liquor store Robson’s beers sell for about R21 for a 550ml bottle and can cost as much as R35 a pint in a restaurant or pub.

Jonathan Nel and his Three Skulls Brew Works are an example of the new generation of South African microbrewers.

Another former SAB employee, Nel began brewing beer at home two years ago. His beers made their debut at the Clarens Craft Beer Festival two weekends ago.

“I got a fantastic reaction,” said Nel. “I was amazed at how many ladies wanted the mango passion fruit and lavender wheat beer.”

His Golden Skull American pale ale was also well received and sold out by 3pm, three hours before the festival closed.

Nel said he had just signed a lease for a new brewery site in Fourways, Johannesburg, and would get his beers on the market as soon as he received a licence.

“Brewers enjoy working to make beer as much as drinking beer instead of working.” These were the sage words of a 19th-century artist from Louisiana, Harold Rudolph. Cheers.