SA men: A history of violence 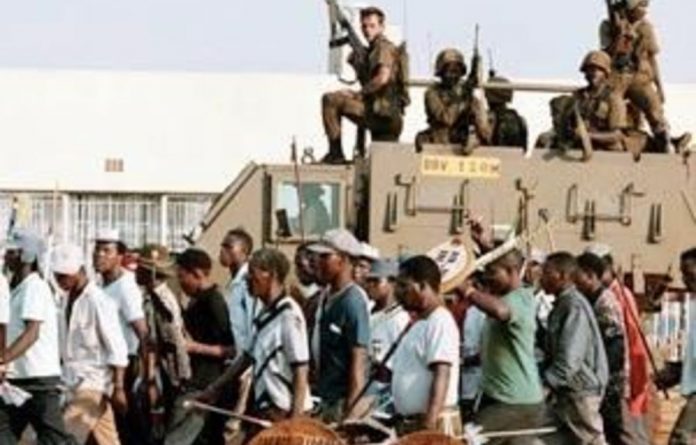 The white right-wing group Kommandokorps has emerged again in mainstream media after an in-depth article in the Mail & Guardian and a short documentary video in cyberspace.

The group has been in the news before, but the recent investigation exposed some of the controversial techniques used in its cadet camps.

Both the Democratic Alliance and AfriForum responded with severe criticism and a request for an assessment of potential human-rights abuses.

Extremist groups such as the Kommandokorps, the Volksraad Verkiesing Kommissie and the Afrikaner Weerstandsbeweging are often dismissed as irrelevant, even comical. Yet the debate about whether they are menaces or clowns misses something insidious. The video shows the way in which violence is equated with manhood, demonstrating that certain forms of masculinity are valued above ­others. These processes are often overlooked, but they are the root cause of the high levels of violence in South Africa.

As a white, Afrikaans-speaking man, I consider myself both an Afrikaner and an African. When I first watched the Kommandokorps video, I was sick to the stomach and outraged. Once again I would have to defend my culture to my diverse group of friends and colleagues and repeat that we are not all like that. At the same time, I was surprised by how deeply the video affected me, because I live and work in a context far removed from the Kommandokorps world. The unease sprouted from an old familiarity I have with the discourse of the Kommandokorps cadet camps. As an Afrikaans-speaking white man born long before 1994, I recognised the rhetoric of “true Afrikaner manhood” and how racism is embedded in it. I was regularly exposed to this discourse at school cadet camps and in classrooms and friends’ homes when I was young. There was little or no room for other forms of masculinity. During break time as a teenager, my friends would share their bravado stories of how the men in their family used violence towards black people to prove how manly they were. These experiences returned vividly when I watched the Kommandokorps video.

The public discussion about the far right has largely ignored the way masculinity is used by groups such as the Kommandokorps. In the cadet camps documented by the M&G, Afrikaner masculinity is a Trojan horse for racism and normalised violence. In the camps, harmful cultural beliefs are transferred to the boys, embedded in their need to achieve “real manhood”.

The use of the term “real man” seems common at the camps and in the movement. Before and during the camps, one hears it said: “I want to be a real man” and “You will become a real man”. The boys talk about how Colonel Frans Jooste loves them and cares for them. They call him “grandpa”.

During one of the physical exercise sessions, a boy cries that he is struggling but he does not want to disappoint his father. At all costs, they want to become the “real men” their fathers expect them to be.

The intense cultural and physical experiences of the camp are thereby intertwined with the boys’ formation of their own masculinity.

The boys talk at the beginning about how positive they feel about the new South Africa. But, by the end of the nine-day camp, they say they now understand that racism is the best approach and they realise how dangerous black people are.

With their new world view of interwoven racism and violence, the boys are then welcomed as “real men” into their community. This complex, linked set of prejudices is then maintained by this extreme form of masculinity.

The Kommandokorps does not promote sexual violence, but it does seem to display a harmful form of masculinity. In South Africa, such harmful masculinity results daily in massive levels of violence perpetrated by men. The fight against gender-based violence has for decades been the domain of women-led organisations, but in recent years a movement has emerged that seeks to involve men in the struggle for gender equality.

The kind of masculinity represented by the Kommandokorps is not new to South Africa. In fact, it is not unique to Afrikaner culture. During the struggle for liberation, violence was used on both sides. To use Brazilian educator Paulo Freire’s phrase, both the oppressor and the oppressed were brutalised by the normalisation of violence.

Growing up in Sharpeville, I witnessed the normalisation of violence first hand. During the struggle, if one was not willing to participate in the consumer boycotts, for example, you were punished in two ways. First, you were forced to consume the products you bought, including raw meat, washing powder and full bottles of fish oil. Then, in addition, this punishment was embedded in the message that you were a wimp or a sissy and did not act like a “real man”. The “real men” were eager to be violent; they did not show any reluctance. Violence became normalised as part of manhood. Its association with masculinity was present on both sides of the struggle, where both soldiers and fighters equated being a man with their achievements in the heat of the conflict.

Following the hard-won gains of the struggle, institutions such as the Kommandokorps remind us of these harmful forms of masculinity.

Afrikaner men, however, seem to be silent in public debate on the matter of violence perpetrated by men. Many Afrikaner men added their voices to the struggle for liberation: Beyers Naudé, Max du Preez, Pierre de Vos and others have added and still add valuable insight into and support for the nation’s transition, in comradeship with all who fought and fight for democracy.

Benefiting from privilege and being fundamentally opposed to the source of such privilege is tricky. In post-1994 South Africa, Afrikaner men share the privileges of gender inequality with other men, but have not added significantly to the public debate.

Afrikaner women, on the other hand, have long contributed: Amanda Gouws, Christina Landman and Christi van der Westhuizen have been powerful voices for feminism and gender equality for years.

Research tells us that most men in South Africa are not violent towards women. But the lack of expressed outrage from Afrikaner men about groups such as the Kommandokorps perpetuates the myth that all Afrikaner men are like that — committed to violent, racist forms of masculinity. Gender equality is fundamental to democracy. It is high time they joined the debate.