Preaching the gospel of bling 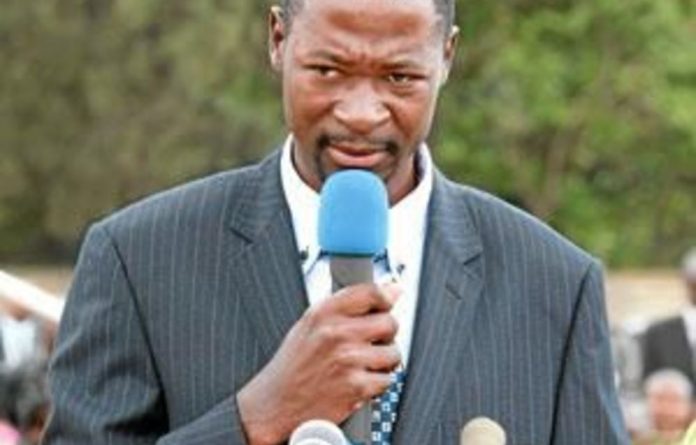 The young woman rocks nervously on her high heels and smiles uneasily as the prophet struts around her. She has had a hard time pinning down a man and she cannot get a job, we are told. Today, all her troubles will end.

"Many men have come and promised to marry you, but nothing happens. Is that not true?" declares the prophet.

He responds: "Listen. I was with the spirit. I'm in a vision. We are travelling. By the power of the spiritual navigator, I am turning towards a junction. Unit K. Is that not where you live?"

Bull's-eye. The church rises in a roaring mass, hands in the air. But wait: now for the big reveal.

"My sister," the pastor says, rubbing his hands as if he were counting money, then holding her hand. "I see you counting money. Money. You will need a money-counting machine. Money, flowing to you."

The "hallelujahs" rise and the band responds with a burst of sound.

Poster boy of the gospel brigade
The prophet is barely into his 30s, wears a velvet jacket, floral high-collar shirt and brown pointed-toe shoes. He goes by the name Uebert Angel. He is one of the poster boys of Zimbabwe's prosperity gospel brigade. They are in their early 30s, natty dressers who bag crowds yearning to fill the gap left by old-time religion: the promise of prosperity.

Who can resist that? The old churches still insist on Christ's teachings to "store up your riches in heaven". But why wait when the prophet in the velvet jacket says you can have it all here and now?

And so, over several recent Sundays, I found myself among the throbbing throngs in Harare's churches and stadiums, getting down to Nigerian Uche Agu's My God Is Good Oh, that impossibly catchy anthem of the prosperity gospel movement: "Everything is double-double, promotion double-double, my money double-double, my cars double woah."

They queue before the prophet, waiting for that word to spring them from misfortune. It goes like this: you are poor because of evil spirits. What follows is a microwave exorcism: a quick rap on the forehead, sometimes a whack from the prophet's jacket. Ardent membership, of which giving is a priority, seals the deal. Soon that elusive job, the husband, the business, is yours.

"Mine is a rich God. Why should his children be poor?" Angel says in one service.

'The overflow'
Although Angel is hot, he is no match for his close friend, Emmanuel Makandiwa, the lanky, charismatic 34-year-old who leads the United Family International Church, easily Zimbabwe's biggest church. Here, prosperity gospel is staple fare. Every Sunday Makandiwa draws as many as 40 000 followers. The arena he uses as his church takes only 20 000; thousands more are housed in four giant tents outside, an area called "the overflow".

To accommodate everyone, he has had to split his Sunday service into two. A third service is held in nearby Chitungwiza, at the construction site of a 30 000-seat church.

On Sunday, Makandiwa preaches about "possessing the promises". When the devil steals from you, he tells us, he replaces what was stolen twofold. Which is why, he says, when he crashed his Mercedes Benz S320, it was quickly replaced by a brand-new S600. To that, the couple to my left spring from their chairs, roaring, Bibles thrust in the air.

This church has declared 2012 the "year of results". What good is faith when you have no material results to show for it? it asks. So followers display stickers on their cars declaring how they have prospered: "I am a child of a prophet who brings results. This car is a result."

On sale at a kiosk outside the arena are more stickers declaring prosperity. For a dollar, I buy the one declaring: "I have the power of influence."

The pastors have a firm hold on their followers. The young pastors are called "papa" or "daddy". Every material gain is owed to Makandiwa. One of his senior pastors, Takura Rukwati, gushes: "Taking a hard look at my life, I can reveal that I had nothing to show in terms of material things before I met prophet Makandiwa. For example, the car I drive, the house I live in, the clothes I wear, even the button on my suit, he provided. Prophet Makandiwa gave me these things."

A class of partner
So, how do I get in on this prosperity stuff? I have to become a "partner", I am told. Being a partner means that I get to be one of those members that give more to the church than the ordinary people. The more I give, the more I am blessed.

Here is how it works: there are six different classes of partnership that vary according to how much you give. Classes range from "bronze", for giving $10 a month, to the "star" class for those who can spare $1 000 or more. You become a partner only after contributing for three consecutive months. Top partners get good seats and even get to hang around the prophet. That widow in the Bible, the one who impressed Jesus the most when she gave only a few lousy coins to the temple while the rich gave sacks of gold? She would not make ­partner, not even qualify for bronze.

On Mondays, in what used be a movie theatre in central Harare, the partners of Angel's church meet. On the stage is a man in a grey suit and burgundy tie, warning partners against failing to meet their pledges. According to the teaching here, it is partners who are first in line when God opens "the floodgates of heaven". There is frequent reference to this scripture — Malachi's teachings on tithes.

These are not your ordinary, dog-collar kind of pastors. According to Makandiwa's website: "The man of God has received and continues to receive great revelations from God combined with the unusual ability to rightly divide and teach the word of God with such accuracy and precision worthy of an international minister for the kingdom of God who is and will be noted among the great men of God in the world in this era."

Who can resist that?

These are desperate times and people are desperate for answers to real problems. The pastors seem to have them. In fact, they know everything. "The only prophet in Zimbabwe who can prophesy your ID number," says a press advert placed by prophet Passion Java (23), whose church is called the Kingdom Embassy.

He discovered his gift in his early teens when he saw "a set of spinning numbers in the air", which turned out to be a schoolmate's ID number. "I was born with a special gift. When I was young, I used to have strange dreams depicting me in heaven, surrounded by angels. I have the power to foretell one's future," he says.

Pulling in the numbers
Of course, with the young guns pulling in the numbers, there are bound to be haters, such as the anonymous pastor who has been taking out full-page adverts in the Sunday papers recently, raging against "greedy false prophets pronouncing false blessings". Well, the prophets repeatedly tell us to expect this kind of jealousy.

Their marketing is snazzy and edgy to match the teachings of prosperity. Across the city, walls are covered with colourful posters. They feature prophets, dressed in colourful suits, standing next to pretty prophetesses, announcing a conference. One recently advertised conference cost as much as $100. But what is a few dollars when I will come out of there up to my eyeballs in prosperity?

In Harare, we have a conference for every problem. Having trouble being a successful man? There is the "Men's Transformers Conference" coming soon. On the banner, below the names of Angel and Makandiwa, is an image of Optimus Prime, the leader of the Autobots, the good robots in the Transformers TV series.

Having problems at home? There is the "Why Did I Get Married" conference for couples and the divorced. There is a picture of Angel and his wife under the title, scanned from the banner for a Tyler Perry movie.

Having trouble finding a partner? For the single and searching, there is the "One Night Stand Conference". At the bottom, the poster declares: "When you wake up, we'll be gone."

Jason Moyo is a regular contributor to the Mail & Guardian

Commission calls for new limits to halt the commercialisation of religion