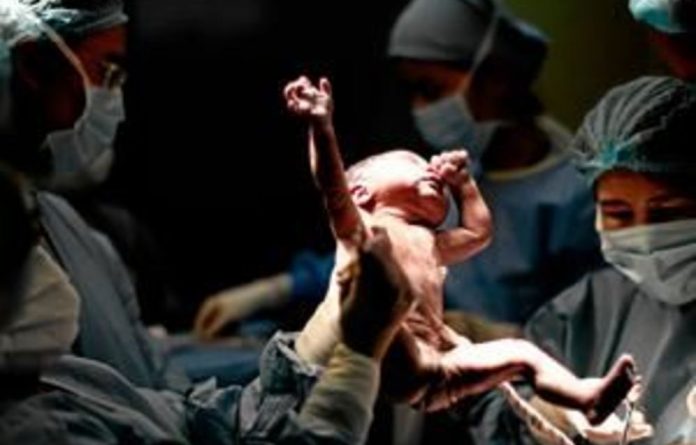 It is mid-morning in the delivery suite at King’s College hospital in London, and midwife Terie Duffy is cooing over the contents of a stainless-steel bowl. “Isn’t it beautiful?” she says. “This is what makes my job worthwhile … the opportunity to give the chance of life.”

But the object of her attention is not a baby. It is a placenta, which was, until about five minutes ago, attached to 4.1kg Princess Gracie, who is crying lustily in the birthing room next door with her mum Charlotte Cribben and dad Andre Kum.

“It has done its job for Princess Gracie,” explains Duffy. “And now the precious stem cells it contains could cure another child or adult of leukaemia or another blood disease.”

Hirasine Sengomona, one of the cord collectors at King’s, lifts the placenta to eyelevel and pulls the attached umbilical cord downward so the blood runs down it, before piercing it with a needle. Within seconds, the attached plastic bag is filling with blood.

“The cells we’re collecting are magic cells, miraculous cells,” says Duffy. “They’re the blueprint for all the different cells in the blood — so for someone whose own bone marrow isn’t working properly, they can be a real lifeline.”

Sengomona weighs the bag. At 102g, it is not enough for a transplant, says Duffy, but enormously useful to haematologists doing research into stem cells and their use.

Duffy has been running the cord blood collection programme at King’s — one of the most advanced schemes of its kind in Britain — for the past five years. “For most parents, whether to donate or not is a complete no-brainer,” she says.

Mariana Lopes and Simon Brooks, whose son Joseph was born the previous day at King’s, agree.

“When it was explained to us that this is a waste product, and that giving it would not affect us or the baby in any way, we didn’t hesitate,” says Brooks.

“To think that Joseph’s cord blood, which will be frozen in the stem blood bank, could help someone in the future is really good.”

So far there have been about 2 500 cord blood donations from King’s, but it was only a few weeks ago that the first transplant from any of those donations took place, after the Anthony Nolan register, which administers a scheme to which King’s belongs, matched a donation with an adult male with blood cancer. He is apparently doing well.

“That’s the most fabulous news,” says Duffy. “We hope there will now be many more recipients of cord blood from King’s.”

That the King’s programme has had only one recipient so far is largely because the science is still in its infancy.

“The cord blood bank is already saving lives, but research is ongoing and it’s very likely that in the future more ways of using cord blood will become clear, and it may be possible to treat more diseases.”

Currently, most of the recipients of cord blood — as with those who receive bone marrow transplants from family members — have leukaemia, lymphoma or other blood diseases.

There are two cord blood banks in Britain, one run by the Anthony Nolan register and another by the tax-funded National Health Service (NHS) Blood and Transplant Service. They harvest cord blood from a handful of hospitals — the NHS bank collects from maternity hospitals in and around London, whereas Anthony Nolan collects from hospitals in the Midlands as well as in London. Both banks hope to expand further, aided by £4-million split across both from the British department of health last year.

About 2 500 donations are banked with the Anthony Nolan scheme, and another 18 000 with the NHS cord blood bank; the banks’ targets are 15 000 and 35 000 respectively, which, says Guy Parkes of Anthony Nolan, should ensure that most patients who need a donation of blood stem cells should be able to find a match, using either the register of adults willing to donate, or the cord blood bank.

Recipients of cord blood from public banks, on the other hand, are on the increase. Three-year-old Austin Clover, who was diagnosed with a pre-leukaemic condition at eight months old, had cord blood from the Czech blood bank (sourced by Anthony Nolan) in October 2010. He spent months in isolation until the graft had taken, but is now, says his mother Kerry Tuffin, living a normal life.

“He recently started at nursery and he’s doing really well,” she says.

“I’ll never know the Czech mother who donated her baby’s blood, but I wish I could tell her what a difference it has made to Austin’s life, and to ours.” —