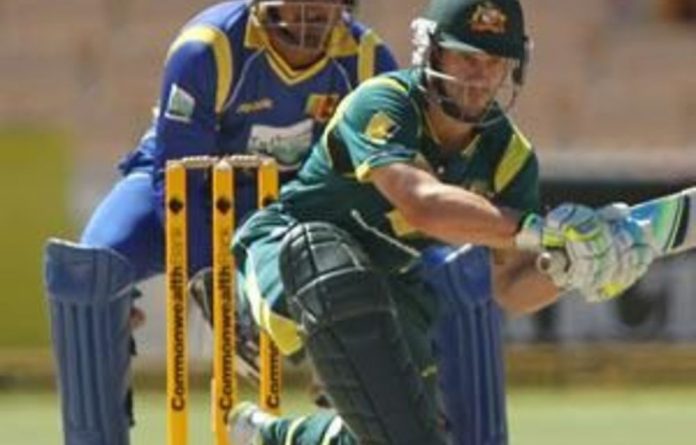 A wonderful maiden Test century from Matthew Wade and a poor batting display by the West Indies left Australia in total charge at the end of the second day of the third and final Test on Tuesday.

Australia lead by 163 runs, after being dismissed for 328 and having reduced the West Indies to 165 for eight at stumps and are set fair to seal the series having come into it with a 1-0 lead.

Wade’s innings of 106 had rescued Australia from a perilous looking overnight score of 212-7 — they had been 169-7 at one point on the opening day.

Wade finally fell to the impressive Dominican-born spinner Shane Shillingford, who went on to snaffle Ben Hilfenhaus and finish with a career best 6-119 and make it a memorable experience for being the first Dominican to play a test on his home island.

It could have been so different had not Kemar Roach dropped Wade off his own bowling in his third over of the morning when the batsman had yet to add to his overnight score of 22.

The hosts did strike next ball, though, as a sharp piece of fielding by Kraigg Brathwaite ran out Mitchell Starc for a test career best of 35.

Sweep shot
Wade upped the tempo as he approached his maiden Test 50 and brought it up with a sweep shot that yielded two runs. This mark having been reached Wade went on the attack with the highlight consecutive sixes off Shillingford.

He took seven from the next over and brought up a wonderful century by driving Roach through the covers for four. It had taken 143 balls but the second fifty was struck in just 33 deliveries.

In Shillingford’s next over, Wade went for another six over mid-wicket but another brilliant bit of fielding brought his downfall.

Darren Bravo took a catch just inside the rope but realising his momentum was taking him over the boundary he threw the ball up, gathered himself and returned to the field of play to hold on to the ball.

Wade and Hilfenhaus had added 102 runs for the eighth wicket in just 20 overs.

The batsmen had crossed as Bravo took the catch and two balls later Hilfenhaus was bowled as he tried a slog over mid-wicket for 19.

The Australians made an immediate breakthrough as the hapless West Indian opener Brathwaite edged to Ryan Harris off Hilfenhaus for his third successive duck and sixth in 16 innings.

Early blow
Kieren Powell and Adrian Barath steadied the ship somewhat after the early blow and had added 61 before the latter divvied up a simple bat-pad catch to Ed Cowan at short leg off Nathan Lyon’s bowling.

Bravo’s eyes lit up as he crashed the third and fourth balls to the boundary. Warner got the last ball to bite and the ball came off the edge on to Bravo’s pad and gave Cowan his second catch in as many overs.

Lyon ended Powell’s stubborn resistance in the third over after tea, the batsman getting an inside edge that hit the stumps, and the bowler was to snap up his third wicket when Cowan caught an inside edge from Carlton Baugh.

Darren Sammy provided veteran Shivnarine Chanderpaul with some support but he was trudging back to the pavilion when they took a risky single and Cowan, on fire in the field, scored a direct hit to remove the West Indies captain for 10.

Shillingford went for a duck and it was only an unbeaten ninth wicket partnership of 45 between Chanderpaul (34) and Ravi Rampaul (24) which gave the hosts some cheer at the end of play. — Sapa-AFP