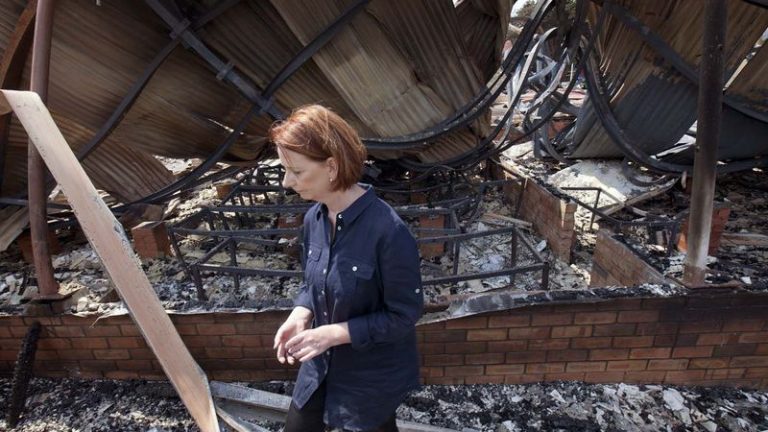 They were hopeful they had dodged a potentially catastrophic fire day without loss of life or major damage.

Hundreds of people were forced to evacuate homes as fires raged in southeast Australia, while some had no choice but to seek shelter in their homes as fires approached. Temperatures soared to more than 45°C.

Fire fighters hope cooler weather sweeping up the Australian east coast late on Tuesday, which saw temperatures fall 20°C in a matter of hours in some coastal towns, would ease the incendiary conditions.

"It's very much a moveable feast with many fires still being identified," said New South Wales (NSW) state fire commissioner Shane Fitzsimmons, warning a respite would not come for some hours and would last only days before searing heat driven by outback winds returned.

The severe fire conditions replicated those of 2009, when "Black Saturday" wildfires in Victoria state killed 173 people and caused $4.4-billion worth of damage.

After a week-long heatwave bushfires are ablaze in five of Australia's six states, with more than 137 fires in the most populous state NSW, and in forests around the capital Canberra.

Around 100 houses, the majority on the island state of Tasmania, have been destroyed by bushfires in recent days, and many people are still missing in fire-ravaged areas.

Catastrophic
More than 40 fires raged out of control on Tuesday as thousands of firefighters and more than 60 water-bombing aircraft battled the blazes, some suspected of having been lit by arsonists.

Fire officials declared five areas of southern NSW as catastrophic, meaning if fires ignited they could not be controlled and advised people to evacuate.

"We grabbed the photo albums, suitcases, clothes and jewellery and ended up getting out while we could," said Hallie Fernandez who runs a bed and breakfast motel at Brogo in NSW, where an out-of-control bushfire was burning.

In Australia's biggest city Sydney, where the temperature hit 41.8°C, thousands flocked to the city's iconic beaches, while zookeepers hosed down animals to help them cope with temperatures that tested national records.

The blistering heat also caused a blaze at a nuclear research facility in southern Sydney after cabling overheated in a nearby electricity substation, while thousands of homes in the city's north experienced power outages due to soaring demand.

In the outback city of Broken Hill, the mercury hit 45.1°C, while the country's biggest highway between Sydney and Melbourne was cut by fires that surrounded people in the township of Tarcutta.

Fiercest heatwave in more than 80 years
"The heat has been so intense that tar on the road has been melting and sticking to my shoes," retired Australian journalist Malcolm Brown said from central NSW.

The record heatwave forced the Australian Bureau of Meteorology to extend its extreme temperature limit, adding new pink and purple colours to forecast maps to allow for temperatures of above 54°C.

The bureau is forecasting 54°C in central Australia next Monday.

The heatwave, which began in Western Australia on December 27 and lasted eight days, was the fiercest in more than 80 years in that state and has spread east across the nation, making it the widest-ranging heatwave in more than a decade.

Strong wind gusts had created a "dome of heat" covering much of the island continent, said climate experts.

Australia, the world's driest inhabited continent, is particularly vulnerable to bushfires, fuelled each summer by extreme heat and by what scientists say is creeping climate shift blamed for hotter average temperatures globally.

Authorities warned earlier in the Australian summer that much of the country faced extreme fire conditions this season, after several years of cooler conditions that had aided forest growth, but also created tinder dry fire fuel conditions. – Reuters