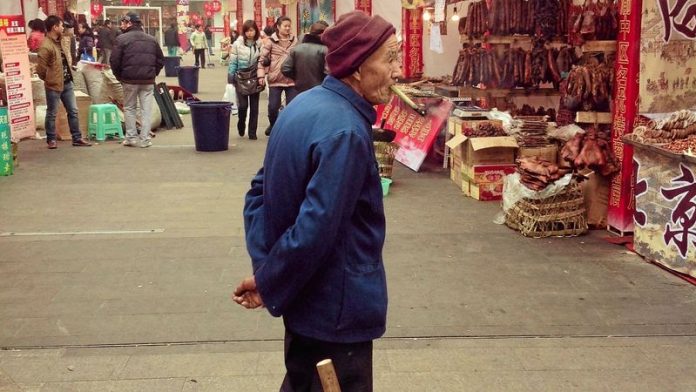 The ritual is simple, brutal. The chilli-clogged broth arrives in a large bowl and is placed on a heating coil at the centre of the table. Small plates of offal, vegetables, meat and wonton are assembled around it, like doomed warriors in a JRR Tolkien action sequence.

When the broth starts bubbling and the array of peppers start leaping in anguished torment, it is time to drop in the brains, the bok choy, the lotus leaf and the pig intestines, wait for them to shrivel up and bob to the surface, and then place them in your mouth.

If you have identified the above as the Chinese hot pot, you are only partly correct. This is Chongqing hot pot, or má là hu gu, a regional derivation that is justly infamous for how much punch every mouthful packs.

“When I first came here, I could not eat,” Janet Wen, regional manager at our splendidly appointed Kempinski Hotel tells us. “I am from Fuzhou [a coastal province where the grub is more recognisably Chinatown] and the food here is simply too spicy. I was starving. I am still not used to it.”

I understand Wen’s pain. Halfway through the meal, the table resembles a badly run triage ­theatre. The “má là” appended to the “hu gu” means “numb and spicy”, which refers to the signature ­Sichuan ­pepper, or prickly ash — blackened kernels of viciousness that are simultaneously analgesic and agony inducing. (Imagine a drug that is both upper and downer, with ­neither sensation cancelling the other out.) The mouth feels like a venue for ­thermonuclear war, but not in a bad way, if you can believe it.

In almost all respects, má là hu gu is the perfect metaphor for the city that produced it.

Chongqing is, at first glance, ­completely inaccessible — an insanely complicated system of interchanges that teeter on giant concrete stilts, rising high above the Yangtze, or what is allegedly the Yangtze, for visibility is rarely more than a few hundred metres in wintertime. The city is swallowed by a milky fog, which renders the hundreds of skyscrapers that blink out of the gloom as inchoate lumps. They only take shape when you stand at their doorsteps, should the fresh-off-the-donkey-cart cab driver know enough about the city to get you to your destination in anything approaching good time.

Influx of money and infamy
As far as dystopian landscapes go, Chongqing makes the Los Angeles of Blade Runner look like a high-end old folks home on the Spanish Algarve. That’s the spicy part. The pleasantly numbing part is the friendliness of the locals, who bear none of the cosmopolitan brashness of Beijing or Shanghai, despite living in a city of 32-million people.

Indeed, most people here — like the baffled cab driver — are migrants newly arrived from the outlying areas. In 1997, the central government identified Chongqing as the nexus for developing the western regions of the country, and for relocating the million or so people who would be displaced by the nearby Three Gorges Dam.

Despite the influx of money and infamy — the city was renowned for its organised crime, and equally renowned for the brutal crackdown — and, despite the fact that the Bo Xilai scandal unfolded here, Chong-qing is dubbed the Invisible City. Never has there been a better sobriquet — can’t see it for the fog, dismissed by eastern Chinese as a catchment area for bumpkins, and almost  totally unknown in the West.

But just because the Chinese and the Condé Nast Traveler ignore the place doesn’t mean that the traveller should. For Chongqing is a city of many wonders.

Properly, Chongqing isn’t a city but a municipality — roughly 77km2 of unbroken civilisation gobbling up districts and counties. Locals refer to Chongqing itself as a “mountain town”, because the city rears up from the embankments of the Yangtze, resembling San Francisco in its vertiginous dips and rises. As with the hutongs of Beijing, now almost entirely demolished, Chongqing once boasted a distinctive architectural palette. To avoid flooding from the capricious Yangtze, homes and businesses were built on stilts. Although most of these old structures are gone, the city retains them in its DNA — the interchanges, for one thing, and the fact that almost no two residential buildings are built on the same level. Everything retains a pell-mell feel, a sense that it was built quickly, with the rage of the river in mind.

Walk the streets of town, and you can put your hand on vast retaining walls, some built almost a century ago, all keeping the city from tumbling into the water.

Centre of life
The river’s flow is, of course, now regulated by the dam, but this strong connection between past and present is a powerful one. Visit the Three Gorges Museum in the People’s Square, and take some time with the main exhibit. Here, one learns that the river has been a centre of life for millennia.

In the official narrative, the dam — the largest in the world, which flooded hundreds of square kilometres and forced the relocation of 1.24-million people — is part of an unbroken technological project that dates back to the country’s founding.

The “migrants” were happy to leave their homes, or so the didactic panels insist — they understood their place in history and how their leaving would benefit the larger whole.

Difficult to swallow, I know — there have been plenty of reports of just how outraged people were by the forced removals.

But for the most part, the Three Gorges migrants now form part of a swelling Chongqing municipality, and it’s one of the reasons the city is so important to Beijing. These newly urbanised masses work in the Ford and Hewlett-Packard plants, among others, that have sprung up at the edge of town. And they’re what give Chongqing its countrified flavour.

That is enhanced by the Kashgars and other Muslim communities from nearby Xinjiang province who arrive with their wares — smoked meat and other delicacies primary among them — and populate the local markets. Little on offer here would be familiar to someone from Shanghai. Indeed, it’s this cultural mash-up that’s more satisfying than anything Chongqing’s guidebooks can cough up. The parks and squares bustle with life, and every nook of the city is used, lived in.

Which is not to say that Bo’s reign didn’t usher in its fair share of antiseptic high-rise compounds and megamalls, the scourge of the new China.

Yes, there has been project after project intended to wipe away Chongqing’s distinctive character, but none has been successful.

Should you make the trip, you can’t do much better than to stay at the Kempinski’s new premises, which also boasts a brauhaus and a decent Western restaurant should the hot pot prove too much. But my recommendation is to leap right in, use the city as a base to explore the Three Gorges region, and as a way to test just how hardy a stomach resides slightly north of your belt buckle.

President Cyril Ramaphosa announces South Africa will move to level one of lockdown on September 20 after nearly six months of restrictions on movement, trade, learning and socialising
Read more
Africa

The Special Investigating Unit is probing contracts worth more than R5-billion, over corruption allegations regarding the procurement of goods and services needed for the government’s Covid-19 response
Read more
Advertising
Continue to the category
Politics