Buried in a white coffin: Anene Booysen is laid to rest 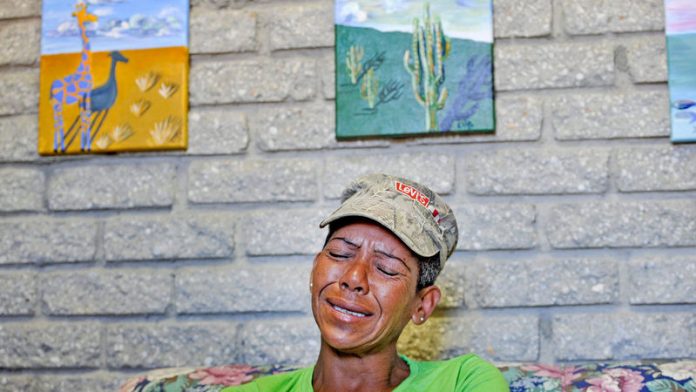 The mother, grandmother and brother of 17-year-old victim Anene Booysen broke down in tears during the service in a packed church in the southwestern town of Bredasdorp, according to SABC Radio.

The girl was found disemboweled at a construction site last weekend and later died in hospital.

Pictures posted on social media showed the girl's white coffin being carried out onto a dusty street before being buried. A single bouquet of pink flowers adorned the casket.

The brutal murder has triggered much soul-searching in a country that often appears numb to sexual violence and is known as the world's rape capital.

Politicians and journalists flocked to the sleepy Western Cape town for the funeral, while a tent was set up for mourners who couldn't fit inside the church.

The girl's attackers reportedly slit open her stomach, took out her intestines and broke her legs.

Police have so far arrested three people in the case, including one of her friends.

The victim's brother said he felt betrayed as he had been close to one of the suspects.

"He was a friend of mine, we went to school together, stayed in one house, we were like brothers," Ryno Booysen told the SABC.

Around 65 000 sexual offences were committed in South Africa last year alone, according to official figures.

On Saturday, police said a Johannesburg pastor had been arrested for raping a woman inside his church. – Sapa-AFP

Backlogs, booze, testicular cancer — all factors blamed for the apparent ineptitude or unwillingness to tackle a pandemic that is silently killing women all over the country.
Read more
Africa

The conflation of human rights violations and a pandemic leave the most vulnerable marginalised. Equitable and democratic societies are needed to fight against this
Read more
Advertising
Continue to the category
Politics