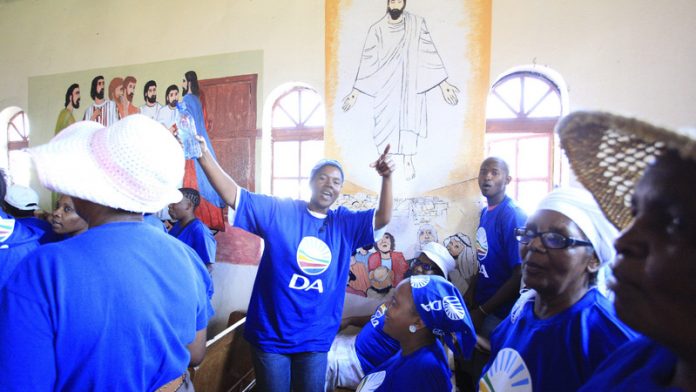 The streets were filled with rallies held by the ANC, Democratic Alliance, Pan Africanist Congress and the Gauteng provincial government as part of the day's commemorations all with a strong undertone of electioneering and campaigning.

March 21 marks the anniversary of the 1960 Sharpeville massacre where 69 people were gunned down in cold blood by police for taking part in a protest against Apartheid era pass books.

The Gauteng provincial government hosted a rally attended by several thousand supporters where a pledge against gender based violence was signed by Premier Nomvula Mokonyane, provinincial ministers and several of the province's mayors.

"It's time we all took a stand against the violence acted out against our woman and children. We have come too far, it is now enough," Mokonyane told throngs of supporters clad in ANC regalia.

Mokonyane also made a point underlining the ANC government's achievements since 1994. "We are enjoying our freedoms but we must work harder to ensure all freedoms are enjoyed by everyone," she added.

The DA address
At the same time DA leader Helen Zille addressed approximately 200 supporters in a nearby church after laying down a wreath at the sight of the 1960 massacre in honour of those slain.

"It's wonderful to see all the different people out here marching today," she told supporters.

Zille said the struggles of those being commemorated should never be forgotten.

The DA made strong mention of the Marikana massacre in their address.

The party claimed the deaths of the 34 miners near Rustenburg in August last year were a clear case of the same brutality that befell the victims of Sharpeville.

"Today we honour the 69 fallen here in Sharpeville the same as we honour every individual who has stood up against tyranny and still does," Zille added.

History repeating itself
The PAC held their rally adjacent to the provincial government's gathering on the sports field of a nearby high school.

"It should be foremost in our minds, the suffering our people had to endure and still endure," PAC president Letlapa Mphahlele told roughly 100 supporters.

Mphahlele also made note of the Marikana massacre, arguing that history was repeating itself.

"This government is no better than the apartheid government. They are responsible for human rights violations and massacres."

The day was relatively peaceful in spite of the political intolerance that usually accompanies many political events in South Africa.

However, there was a heavy police presence on the streets of Sharpeville.

'Special day in our history'
"Ideally all of these parties should be celebrating this day together," Sharpeville ANC member Tsediso Bodiba said.

"It's a special day in our history and we must remember the freedoms we enjoy now came at very great expense."

Bodiba argued the ruling party had made many great strides in delivering freedom to all South Africans and should not be blamed for the deaths of the Marikana miners.

"We cannot preempt what will come from the Farlam commission. Let them finish their work and we'll judge accordingly," he added.

Choose the right party
"The ANC can't claim to be protecting our human rights when they spill the blood of their own citizens and loot our state coffers rough corruption," he said.

"South Africans must realise it is not the ANC government that will liberate them from poverty – they never will."

She said the onus was on all South Africans to no longer blame government for their shortcomings, but rather choose a party which will uplift the country.

"Human Rights Day is about realising what is right for you and your country. It can't be about our history anymore, it must be about our future."