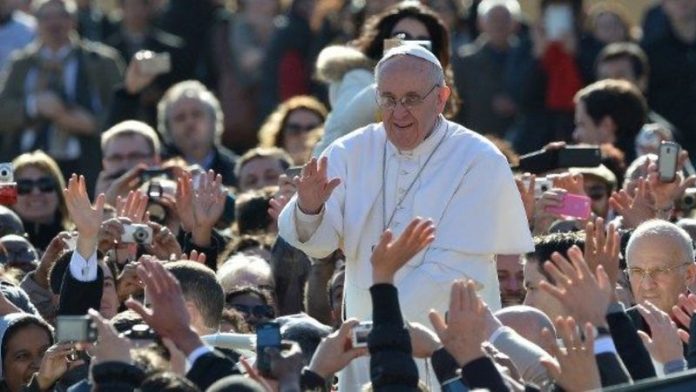 It will be the first time a pontiff will meet a former one since the Middle Ages, with both expected to wear the papal white vestments.

Francis's papacy is likely to be highly influenced by the vast intellectual legacy left by his predecessor, experts say, but the memory of the German pope emeritus appears to have faded from the minds of many ordinary pilgrims.

Postcards on sale at Francis's inauguration mass pictured the smiling new Argentinian pontiff alongside the much-loved John Paul II – the pope in between, Benedict, had apparently been axed.

"This papacy will be rooted in Benedict's teachings. He has been the main intellectual force in the Church for the last 25 years and his legacy will continue to shape it," said Samuel Gregg from the US-based Aston Institute religious think tank.

Despite a stark difference in style, there have already been similarities between speeches given by Latin America's first pope and Benedict.

Francis has promised "friendship and respect" for all faiths and has said he feels "close" to non-believers. Benedict was a keen promoter of inter-religious dialogue and pushed on several occasions for a greater dialogue with atheists.

The 76-year-old Argentine pope also praised people who "are in a search for truth, for goodness and for beauty" – Benedict insisted repeatedly on the "beauty and truth" of the Christian word.

Francis has warned against reducing human beings "to what they produce and what they consume," while his 85-year-old predecessor blamed modern society's obsession with consumerism, speed and personal ambition for a loss of faith.

Religious expert Peter Seewald, who published a book of interviews with Benedict, told the Corriere della Sera daily that "it was clear from the first that the new pope wanted to position himself in his predecessor's tracks."

"Benedict prepared the terrain and opened the way. Francis will continue to follow in his path, giving priority in particular to new evangelisation and the revelation of a message of love and brotherhood," he said.

"John Paul II stabilised the boat of the Church in the storm, Benedict purified it, instructed the crew and brought it back onto the correct course, and Francis will start up the engine to get the Church moving," he added.

Following his resignation last month for age reasons, Benedict retired to the papal summer palace of Castel Gandolfo to live "hidden from the world" – though the Vatican indicated he could provide "spiritual guidance" to Francis.

The pope and former pontiff will live a stone's throw away from each other within the walls of the Vatican when Benedict moves into a former monastery next month.

The German, who is still known as "Your Holiness" and has been allowed to continue wearing papal whites, had already promised obedience to whoever his successor might be after announcing his resignation.

Francis has repeatedly thanked him, including last Wednesday in the dramatic moment when he emerged onto the balcony of St Peter's Basilica immediately after his momentous election.

Analysts expect to see more parallels emerge between the pair, such as the importance of emphasising the positive sides of doctrine rather than what the Church opposes, particularly in the fight against rising secularism.

For all the influence Benedict's intellectual legacy may wield, the former pontiff – who never managed to conjure up the excitement the charismatic John Paul II inspired – appears to no longer be a reference point for many faithful.

Nuns gathered in Rome before the conclave to elect a new pope prayed in front of portraits of John Paul II, preferring to call for guidance for the cardinal electors from a man beatified in 2011 and halfway to becoming a saint.

Young Catholics from all over the world holding 24-hour prayer vigils also turned not to Benedict – sitting in a lake-side palace some 30km from the Vatican – but to his predecessor.

Ahead of the conclave, Fabien Lambert, chaplain of the 12th-century Saint Lawrence church and international youth centre in Rome, took his youthful flock to John Paul II's tomb.

"We asked for his intervention and placed our trust in him," Lambert said.

Those betting on what papal name the newly elected leader of the world's 1.2-billion Catholics would choose touted John Paul III among other popular possible monikers – but Benedict XVII did not appear to be high on anyone's list.

According to Seewald, the pope's decision to name himself after St Francis of Assisi – who shunned worldly comforts of the 13th century to work with the poor – was in line with what Benedict wanted for the Church, and underscores the continuity between the papacies.

Benedict "is a huge admirer of St Francis. After St Benedict (founder of Western monasticism) came St Francis. Both are great, real reformers of the Church, each in his own era, in his own way," he said. – Sapa-AFP