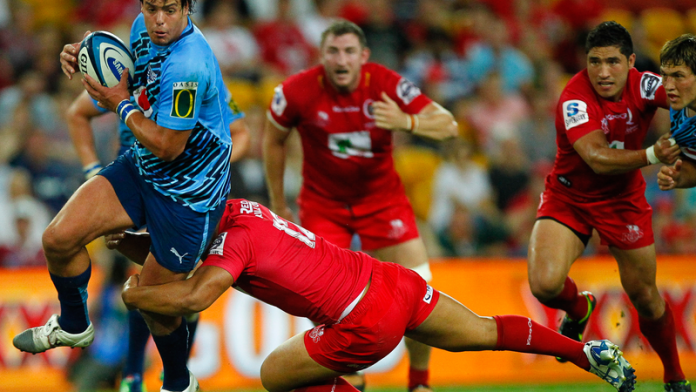 The Pretoria-based team launched a last-ditch attack and looked poised to level the scores with a conversion attempt to come when Engelbrecht dived over in the left corner.

But he put a foot on the sideline in the desperate covering tackle by winger Chris Feauai-Sautia and subsequent video replays by the television match official ruled no try to deny the Bulls a pulsating victory.

The Reds scored both tries in the match, with Wallaby playmaker Quade Cooper finishing with 18 points from a try, two conversions and three penalties.

All the Bulls' points came from penalties, five from flyhalf Louis Fouce and another from the man who replaced him in the second half Morne Steyn.

The Bulls came away with a losing bonus point while the Reds reduced the ACT Brumbies' lead in the Australian conference to six points midway through the weekend round.

"We did some things that we spoke about at half-time that we shouldn't do, like giving them easy penalties to get them back in the game," said skipper James Horwill, making his first appearance for the Reds this season.

"We wanted to play up-tempo against these guys, holding the ball for long phases, and forcing them to make tackles.

"It was really good for me to get through 40 minutes in my first game back and I was blowing a bit at the end and I am especially happy we got the win."

Australian referee James Leckie issued two yellow cards, sin-binning fullback Jono Lance in the 11th-minute and the Bulls going down to 14 men in the 52nd-minute when winger Lionel Mapoe was ruled to have made a lifting tackle on prop James Slipper.

Hungry for the win
Lance scored off breaks by Wallaby halves Will Genia and Cooper nearing half-time, with Cooper popping a pass off the ground for the fullback's try and a 13-6 half-time lead.

But poor discipline by the Reds gave the Bulls three penalties in six minutes from Fouce to hit the front 15-13, before Cooper's try in the 54th-minute.

The Bulls defence held off Cooper, who dashed around lumbering prop Werner Kruger to score a converted try.

Cooper kicked another penalty to extend the Reds' lead to 23-15, before Steyn kicked a penalty and put the South African team in range heading into the final minutes.

The Bulls head to Canberra for next week's match with the Brumbies on top of the South African conference midway through the weekend round.

"It was a tough game, it's always tough for us at Suncorp Stadium," said Bulls skipper Pierre Spies, whose team have yet to win in Brisbane in five visits.

"My boys fought it through to the end, but full credit to the Reds, they played well and were hungry for the win.

"There were a lot of positives in the game for us, the defence on our try-line and the way we came back near the end."

The Reds are off to New Zealand and a match with the Otago Highlanders in Dunedin on Good Friday. – Sapa-AFP.