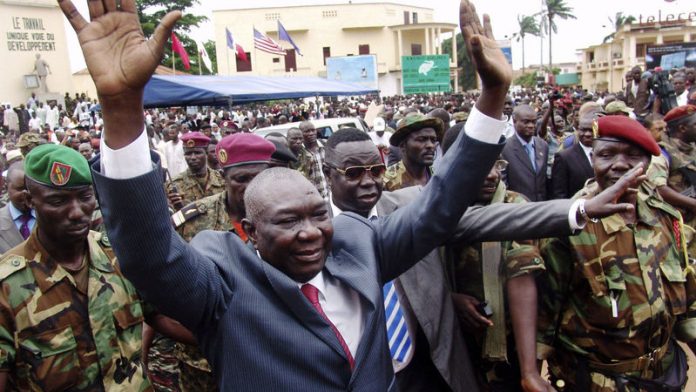 The United States said on Saturday it did not recognise Djotodia, who toppled President François Bozizé on March 24 after leading thousands of his Seleka rebels into the mineral-rich nation's capital Bangui, triggering days of looting.

"I make a patriotic and brotherly appeal for our countrymen, who have chosen the path of exile, to return," the former civil servant turned self-declared president told several thousand cheering supporters near the presidential palace.

"There will be no witch hunt, because we must establish tolerance, dialogue and forgiveness," he said.

Though violence in the riverside capital has ebbed, Djotodia said looters would face justice and called for international help, particularly from former colonial master France.

But the takeover has been condemned internationally. The African Union suspended Central African Republic and imposed sanctions on Seleka leaders, including Djotodia, this week.

France and the United States say the rebels should adhere to a power-sharing deal signed in Gabon's capital Libreville in January that mapped out a transition to elections in 2016 in which Bozizé was forbidden from running.

Djotodia has pledged to act in the spirit of the agreement and said on Friday he would step down in 2016. But Washington on Saturday said Nicolas Tiangaye, named prime minister under the Libreville agreement, was now the only legal head of government.

"We strongly condemn the illegitimate seizure of power by force by the Seleka rebel alliance, Michel Djotodia's self-appointment as president, and his suspension of the Constitution and National Assembly," read a statement from State Department spokesperson Victoria Nuland.

Bozize seized power in a 2003 coup but his failure to keep promises of power sharing after winning disputed 2011 polls led to the offensive by five rebel groups known as Seleka, which means "alliance" in the Sango language.

A grouping of eight political opposition parties, including the one headed by Prime Minister Tiangaye, said on Saturday it rejected Djotodia's proposed three-year transition period and called for new talks to revise the Libreville agreement.

"After consulting among ourselves, we think that 18 months of transition would be reasonable in order to organise new democratic elections," the coalition's spokesperson Edouard Koyambounou told Reuters.

Chadian President Idriss Déby, chair of the 10-nation Economic Community of Central African States, will host a summit in N'Djamena on April 3 to discuss the crisis.

South African President Jacob Zuma has been invited and will attend the meeting, spokesperson Mac Maharaj said on Saturday.

The opposition in South Africa and analysts have asked why a South African military training mission suffered 13 deaths in Central African Republic last weekend as its members fought alongside government troops against rebels.

South African media suggested the soldiers were defending mining interests in a country rich in diamonds, uranium and oil, but Pretoria officials denied this. They say 400 troops were present due to a 2007 bilateral defence accord with Bozize.

On Friday, Djotodia, responding to questions about resource licences awarded to Chinese and South African firms by Bozize, said he would review resource deals signed by the previous government. – Reuters