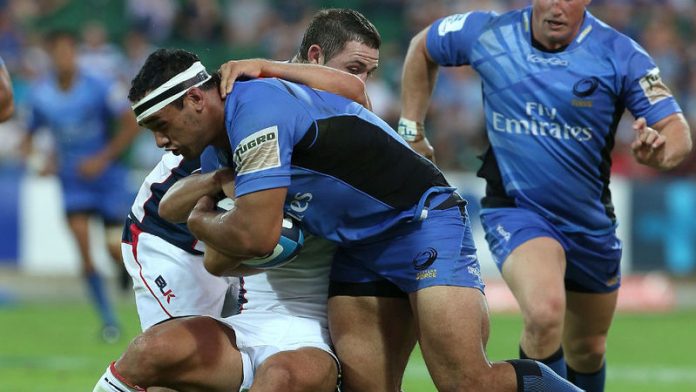 The Rebels arrived in Perth a rabble, after a horror tour of South Africa. Thrashed 64-7 by the Sharks and 34-16 by the Cheetahs, the Rebels also endured off-field problems with two players sent home early, Kurtley Beale and Cooper Vuna, after a drunken altercation.

However, they bounced back to notch their second win of the season, both coming against the hapless Force, who paid the price for a slow start.

A brace of tries to the impressive Jason Woodward, who also had a third try denied by the video referee, enabled the Rebels to hold on after it twice looked like they might squander a commanding lead.

The Rebels hit the ground running to lead 15-0 after 20 minutes and again led 23-11 midway through the second half.

However, they never quite managed to put the Force away and the home team fought back to level the match at 23-all in the 67th minute.

Woodward then scored his second try, and his team's fourth, in the 70th minute to give the Rebels a lead that they were able to hold until the final hooter.

Confidence boost
Scott Higginbotham, captaining the Rebels for the first time, said it was a much-needed confidence boost for his team.

"It is a great way to finish the tour," he said.

"Probably not the exact way we wanted to play but it is good to win all the same.

"The last few rounds we have been playing well in the first half and then dropping off.

"The boys need a bit more confidence and we showed that at the end."

"You can't give sides a start in this competition and 15 points is a lot," he said.

"We need to be a lot better than that, we didn't play as a team."

Horror bounce
The Rebels' Hugh Pyle scored the game's first try in the eighth minute, before Woodward capitalised on a horror bounce for the Force's Will Tupou after a Rebels grubber kick and strolled in for an easy try as they opened up a 15-0 lead.

It wasn't until the 33rd minute that the Force scored their first try, through Winston Stanley, and a succession of penalties conceded by the Rebels enabled the home side to bridge the gap, trailing 15-11 at the break.

Former Force star James O'Connor tormented his old side when he produced a slick pass to Richard Kingi for the first try of the second half in in the 49th minute.

When O'Connor converted a penalty in the 58th minute, his side was ahead 23-11 but the Force then struck back through a try to Tupou just two minutes later.

Woodward looked like he had sealed the result in the 60th minute when he was on the end of an O'Connor pass and scored what appeared an easy try but the pass was ruled forward.

The Force's Patrick Dellit then levelled the scores again when he ran onto a Stanley grubber kick.

However, Woodward's match-winner try came out of nothing when he picked up a wayward pass, saw an opening, chipped ahead and dived on the ball for the try. – Sapa-AFP

As the competition’s fixtures enter their fifth week, there’s a lot for fans to talk about
Read more
Sport

A fast-flagging Otago Highlanders have escaped with the narrowest of victories to get back on track with a 23-22 victory over the Golden Lions.
Read more
Sport

Winger Robbie Coleman scored a try double as the ACT Brumbies downed the Western Stormers 25-15 to go back to the top of the Super 15 conference.
Read more
Sport

The Auckland Blues held off a late-charging Central Cheetahs to sneak into the top six of the Super 15 competition with a 40-30 bonus-point victory.
Read more
Advertising
Continue to the category
Politics