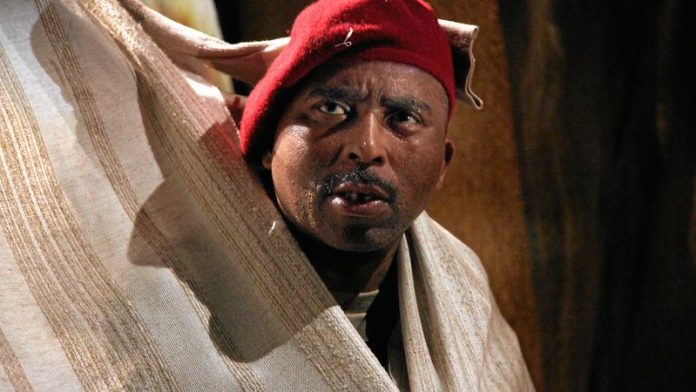 Its subject matter is in many ways a protest: against the remembrance of history; and against the heavy price of individual sacrifice. It is, to put it briefly, a political play.

Currently on at Johannesburg’s Market Theatre, Cadre made its debut on Human Rights Day, an interesting association given the themes of politics and history that that day invokes. Its director, the young and talented Omphile Molusi, who held an impromptu Q&A session after the show, is reluctant to claim that his creation is protest theatre, although it invites the tag. He prefers to call it “people’s theatre” because, for him, behind every tale of politics or protest is a human story. It is the experience of the people who make up these tales that Molusi seems to be attracted to and Cadre is a testament to this.

Drawing on the life of a former Azanian People’s Liberation Army (Apla) soldier during apartheid (Apla was the military wing of the Pan African Congress), Cadre not only paints a picture of the volatile political history of South Africa, it also examines its origins.

The play’s themes include love, loss, sacrifice, revenge and disillusionment. All of these, one gathers, are the result of South Africa’s tumultuous past, and the discontent that it engendered, and still engenders. It is a reflection on this past through the experience of the main character, a cadre of the PAC played by Molusi, who looks back at his childhood, tracing the events that led to his current disposition.

The set evokes a township, which, itself, may be said to have been the stage upon which much of the political resistance to apartheid was played out. It is on the streets of one of these townships that our young protagonist witnesses the killing of his brother. On one hand he wants to hunt down the killer and avenge his brother’s death; on the other, he wishes to make his own spirited contribution to the destruction of the oppressive apartheid ­machinery.

It is in the second case that he encounters the murky territory of confusion and disillusionment, for he has to make and justify decisions that support his mission but undermine the principles that inform them. The higher ideals of fighting for freedom seem to be displaced in the end. Freedom, it would seem, has come at a very high price and has nothing to offer the cadre but emptiness.

Cadre is a political tragedy that is both personal and organisational. The latter comes through in what is the telling story of the PAC, the indirect inspiration behind the play. This answers several questions that the play sensitively asks, such as how many of those who participated in the struggle for South Africa’s freedom have really been recognised and celebrated for their contribution?

Is it only those who were members of the victorious ANC that we celebrate, or does our acknowledgement and understanding of this country’s past demand that we ask who else should be exalted and recognised?

The cast of three, including the seasoned Sello Motloung and Lillian Tshabalala, give incredibly moving performances, jointly and individually, to achieve the ambitious reach of the play. However, one cannot but get a sense that a play like this could do with a larger cast, and perhaps a larger stage, to allow it to be fully expressed. Certainly its eventual success would warrant it.

Cadre is showing at the Laager at the Market Theatre Complex in Newtown, until April 21

Theatre-maker Slindile Mthembu has taken the plunge of reformatting her play, Igama?, for film, so that it can reach a wider audience
Read more
Friday

Many companies in the arts and culture sector are offering virtual tours of their spaces in the wake of the coronavirus pandemic. But artists are missing the personal engagement with their audience
Read more
Advertising
Continue to the category
Politics