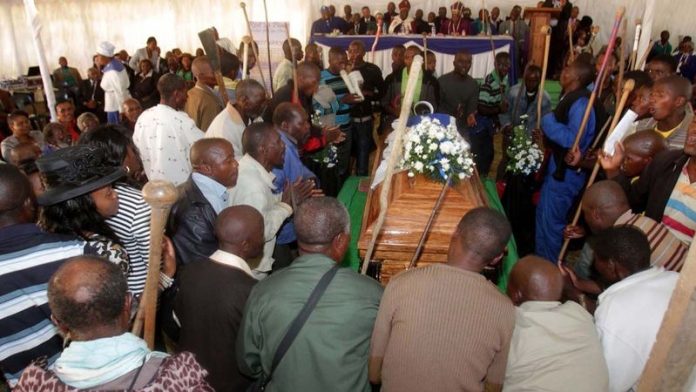 It's still dark as we descend on murdered taxi owner and Marikana sangoma Alton Joja's homestead in Ludeke Halt in the Eastern Cape town of Mbizana. Our source, positive that Joja's burial would take place before the service, advised us to be there no later than 5am.

Joja was widely believed to have provided muti to protect some of the Lonmin strikers from police ammunition. He was shot and killed in his yard on the morning of March 24 by unknown assailants, in what was initially believed to be related to the Marikana commission, where the police legal representatives said he was due to testify. No one has been arrested.

Our source says Joja's coffin – in accordance with Xhosa beliefs about violent deaths – will not be allowed in the house. Heeding his advice, we make it to Mbizana on time. Three big-top marquees of different sizes fill the expansive yard, which lies just off the R61 linking Mbizana and Flagstaff.

Inside one softly lit marquee, a vigil is in progress and a group of about 40 people move to the beat of a cowhide bass drum. Others, dressed in blue robes and carrying wooden staffs, shimmy about rhythmically in a circular motion. Some stand, clapping their hands to complement the beat.

Several rows of chairs fill the main area of the marquee, but most are still unoccupied. Others are taken by weary women wrapped in blankets, betraying signs of a long night.

My colleague and I take seats not far from the corner entrance. Facing us, against the opposite end of the marquee, a group of about 12 men are seated on a row of benches.

Leaderless congregation
After a funeral song, one of the men stands up and, with a slight limp, walks towards the middle of the room and begins to address the silent crowd. He says he is an employee at Impala mine and didn't limp before the Lonmin "war". He tells the crowd that "Ndzabe", as Joja was known, was a frequent visitor to Rustenburg and had "advised us on many different levels". Ndzabe, he says, also told them that, for their strike to be successful, they should consult lawyers. The man says that he was hospitalised after he was injured on August 16 and Joja appeared to him twice in visions as he lay in his hospital bed. Joja apparently told him not to lose faith – they would eventually win the "war".

He tells Joja's now leaderless congregation that "the subject of God came up frequently in conversations the old man would have with people in the Rustenburg area".

He limps back to his seat and the singing starts again.

Another colleague stands up. Taller, in jeans and a fleece jacket, he says that, in Rustenburg, they affectionately referred to the murdered man as "Madala" (old man). He repeats that Joja was always urging mineworkers to join the church.

"The person who did this is a cowardly person," he exclaims, his voice taking on a feverish pitch. "A cowardly person is someone who does not like to see prosperity. You could be sitting with him and he will be plotting your demise."

As the man winds down his address, a tall light-skinned woman dressed in a white two-piece outfit steps in. She walks past the miners to the middle of the room and whispers into the ear of a grey-haired man in blue robes embroidered with crosses. "Please could people not talk to anyone asking questions," she announces. "We believe that there are people from the media here."

If their resemblance is anything to go by, she is the sister of the family's apparent spokesperson, Joja's daughter Ntombi.

Brazen
A man in a dark trench coat summons me outside where about five other men are huddled. I vaguely recognise some as mineworkers.

"Didn't we tell you not to come back here? So what are you doing here?" says an angry man in a snug fitting black knitted cap. He is one of two guards armed with machineguns we encountered when we visited the house earlier in the week.

"Ja, but we were here on Wed­nes­day," I reply. "We spoke to Ntombi and we asked her if we could come to the funeral and she said it wouldn't be a problem."

Inching closer towards me, he says. "On Wednesday, we told you not to come back. We were all inside the house and we told you. So why are you here? You want to further your devious aims?"

I try to dispute this but he cuts me off. "Call security," he says to no one in particular. Then, turning to me and my colleague, he says: "I think you should leave now if you don't want any violence."

Driving back up the path to the R61, one begins to appreciate just how brazen the men pulling off the hit must have been. It's a rough, slow ride for four killers armed with at least an R5 rifle and a 9mm pistol. They are said to have used a red VW Polo Vivo to commit the crime at about 9am.

Anonymous and glowingly one-sided
Once on the R61, they turned left in the direction of Flagstaff and drove for a few hundred metres before turning left on to another dirt road, driving past a densely populated village and then downhill to a secluded area known as Kwande Village. Turning left at a fork, they got out and set the car alight.

An eyewitness says the getaway car was "enviably beautiful" and was "driven by a bulky, dark man who had his window down".

The local police won't utter a word about the case. "It's too much of a complicated web, my friend, it involves too many high-up people," was all an officer – who asked that his name not be used – would say.

Hawks spokesperson Captain Paul Ramaloko said they would provide an update on the case when they were ready to do so.

Anecdotes from Joja's neighbours are, for the most part, anonymous and glowingly one-sided. "Even in election season," says Faku Hlamandana, "he would always campaign for the ANC but advocate peace".

One man places his name on the record and then decides against it once he starts telling me about how Joja beat several taxi-related murder raps in the 1990s – murders that apparently took place after someone slit the throat of an employee in Joja's yard.

"Mzalwane [the believer]," he says, "was healer among healers. He had no abotokoloshe or baboons."

Tenuous
Rumours surrounding the myth of Joja's invincibility are omnipresent. One was about how he first had to be stabbed before the volley of gunfire so "that the bullets could penetrate".

At the end of it all, we are left with three loose ends. The Marikana commission of inquiry link (as a possible cause of the murder) seems tenuous. According to the South African Police Service's legal team, Joja had yet to be consulted and no witness statements had been taken from him. Early last week, police spokesperson Makhosini Nkosi's told journalists that a missing R5, which was taken from a police officer during the bloody August 13 showdown with miners in Marikana, had apparently made its way to the Eastern Cape and was possibly used in the murder. That was the last thing that the police revealed. Family members told the media that no statements had been taken from them.

A second loose end, reported by the Daily Dispatch, was proffered at the funeral by uNcedo Taxi Association president Ntsikelelo Gaehler. He said Joja had caught wind of a plot to assassinate him. He believed it came from within the taxi industry's ranks.

A third, as told to the Mail & Guardian by two independent ANC sources close to the Mbizana local municipality, was that Joja had been offered a contract to kill the ousted mayor of the municipality, Zoleka Busuku, but he had refused on the grounds that she was a woman. The murder, according to this theory, was punishment for his refusal.

The municipality's spokesperson, Sandiswa Memela, said she was aware of that rumour but, to her knowledge, no one in the municipality was involved in those kinds of activities. "The situation has been clouded by so much rumour mongering that it has become uncontrollable," she said.