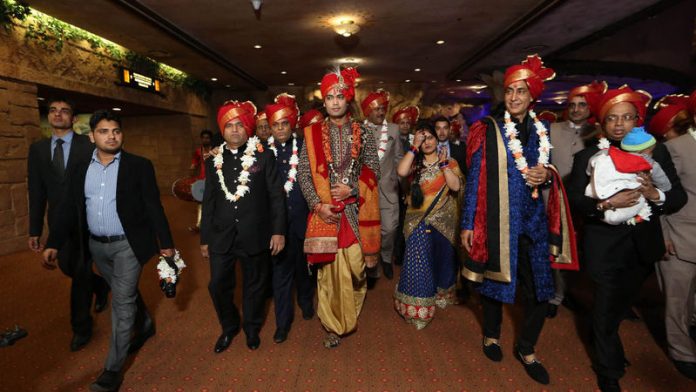 You couldn't help but wish you had cracked an invite as the Gupta's four-day wedding rolled on, and the controversy raged.

"The night sky was lit up with firecrackers followed by a sumptuous dinner with delicacies from across the globe for all the guests," wrote Ghosh.

Pick: Your friends or your country, Zuma

The opulence of the affair, dubbed by the press as "My big, fat Gupta wedding", has become a hot topic in a country weighed down by poverty.

Yet the celebration might have gone relatively unnoticed in South Africa if it had not been for the ­outcry surrounding the landing of a private jet at the Waterkloof Air Force Base.

For the Gupta family, the negative news coverage was of concern because of the "damage it is doing to the Gupta family at a time it wants to celebrate a very important wedding", said Ghosh.

Sun City, which was the place to be seen with Sol Kerzner in its heyday, played host to the hundreds of guests who had flown in for the wedding.

Taste of Indian traditions
The function kicked off on the pool deck of the Palace Hotel, where guests were welcomed with a shower of exotic flowers and traditional South African dancers.

"Drumbeats and foot-tapping rhythmic music filled the air of the venue. Guests from India including ministers, actors and celebrities were left enthralled by the music and dance by local troupes," wrote Ghosh.

After the prenuptial ceremony, the stage was set around "a mammoth yet artistically placed elephant".

"Vega and other women at the function enjoyed getting their hands and feet decorated with intricate patterns using henna," wrote Ghosh. "One of the Hindu beliefs is the deeper the colour of your mehndi [henna], the deeper the love of your partner.

"Vega and Aakash were seated on a raised platform in front of the stage and were flocked by the guests to get a click with them.

"People from South Africa got a taste of Indian traditions and classical music through different instruments and renditions from famous Indian artists like popular Mumbai-based singer Kavita Paudwal and Indian pop-rock singer Kailash Kher and others.

"All the guests were offered bangles, artefacts, turbans and scarves in all colours," wrote Ghosh.