Messi is ready to take on Atletico, says Barcelona boss 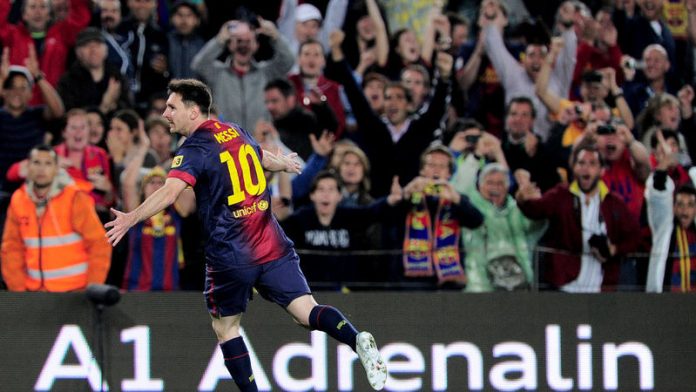 Messi came off the bench to score twice in last weekend's 4-2 win over Real Betis as he continues his recovery from a hamstring injury he suffered at the beginning of April and Vilanova is hopeful he will be ready to start against Atleti.

"He has had a good week, he has trained well, to a very good level," Barcelona manager Vilanova told a press conference on Saturday.

"If he is ready for 90 minutes we will see in the match, but in principle yes he is."

Barca's canter towards the title has been somewhat delayed and distracted by Real Madrid's fine league form in recent months and Barca's own humiliation at the hands of Bayern Munich in the Champions League.

However, Vilanova is sure due credit will be given to his side when they do eventually wrap up the title and is even targeting matching Madrid's league record tally of 100 points from last season.

"I do believe the league is given value, but we had such a good first half of the season that it gave the sensation that it was a league that had been won for a long time.

"Madrid have had such a great second half that if we had relaxed we would have had problems, but we need to close out the league. We are competing against what people say is the best Madrid in history, the one of 100 points. We are lacking the final point, which is the difficult one," he said.

'We have to win tomorrow​'
"The first objective is winning the league and getting 100 points isn't a title in itself, but now we don't have games during the week so we are arriving well at the games. If we try to do it we can do it," Vilanova added.

Barca could even have the league sewn up by the time they kick off at the Vicente Calderon on Sunday should Madrid fail to beat Espanyol on Saturday night, but Vilanova is solely concentrating on Barca getting the job done themselves.

"I am planning that we have to win tomorrow, I cannot think about what might happen today. We need to win ourselves, that way it is easier to concentrate in your game if you are not looking at the rest.

"I expect that Atletico will want to beat us, I am convinced that every team has its motivation," the Barcelona manager said.

"I am sure that it won't be an easy game. They have only conceded 10 goals all season at home, the least of anyone. They are having an exceptional season and [Diego] Simeone has already had one last season." – AFP

In two recent documentaries, we finally get up close to the complicated sadness of Argentina’s original football deity
Read more
Advertising
Continue to the category
National