Lonmin strike: What drove workers back to Marikana? 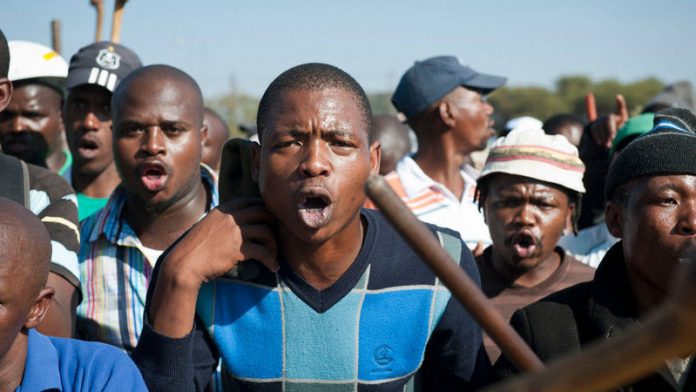 "Turn and look at the mountain. Something is about to happen," said one of the miners gathered at Wonderkop at Marikana on Tuesday afternoon. He stood near the koppie – the larger one – where many of the miners were killed in the Marikana killings in August 2012. He was one of thousands who returned to the scene of that crime on Tuesday.

But by Tuesday evening, his prophecy still lingered in the night air. About 4 000 miners gathered peacefully at the Wonderkop Stadium in the evening, after first meeting at the smaller and greater Marikana koppie.

Their strike began without notice. Even the Association of Mineworkers and Construction Union (Amcu) leadership was caught off guard. It received word early on Tuesday morning that none of Lonmin's miners had arrived at work. Lonmin's management was equally surprised, issuing a brief statement to say that it did not know why the workers were on strike, but that they were trying to find out.

By Tuesday afternoon, the workers had wound their way back to those legendary Marikana koppies, while Amcu branch committee members met with mine management.

The Mail & Guardian understands that Amcu wants Lonmin to fast-track the formalisation of its recognition rights, which it is entitled to as the majority union on the mine. Amcu also wanted its rival, the National Union of Mineworkers' local branch closed. The NUM could not be reached for comment on Tuesday.

At the koppie, workers demonstrated under minimal police presence. They seemed unthreatening – even jovial.

"We won't be undermined by other men; we would rather go home … Liar, liar, your lies will get you deeper into trouble," they sang.

Later, they moved to the Wonderkop Stadium, and dispersed around dusk. They promised to return to the stadium on Wednesday morning.

Murder
But the workers have laboured in relative peace underground for months under the full knowledge that Lonmin had not signed Amcu's recognition status document yet.

So what drove the workers back to the Marikana koppies on Tuesday, in a march crescendoing with memories of the August 16 massacre?

The most likely answer, according to Amcu, is one Mawethu Joseph Steven, the union's regional organiser who was murdered on Saturday.

Steven's death was the latest, and arguably the most prominent, in a string of killings and suicides since the Marikana massacre on August 16 2012. Steven, like others, was due to give evidence at the Farlam commission of inquiry, which is investigating how 34 miners ended up dead that day with rounds of police bullets lodged in their warm bodies.

His life, which straddled both unions and epitomised their stand-off, could not have ended at a worse time. Lonmin is under pressure from Amcu to sign an agreement that formally recognises it as the majority union at Marikana, while Amcu and the NUM members are killed regularly. Tensions between the two unions are volatile, at best. At worst, they are deadly.

The M&G reported on Monday that Steven was critical of Amcu's ability to wrest the membership of workers in the Rustenburg platinum mines away from the NUM.

He was dismissed as a branch chairperson of the NUM in 2011 – but workers were livid about his removal – and they went on strike in protestation. Steven would go on to be a regional organiser for Amcu at Lonmin, although he was dismissed from the mine, too.

Significance
What Steven knew about Amcu's formation, and the context in which the Marikana massacre occurred, would have been of significance to the Farlam commission.

Amcu, and especially its workers underground, are devastated by his death; so much so that not even Amcu's shop stewards were aware of the plans to protest, and late on Tuesday afternoon, negotiations with Lonmin management were left to lowly branch committee members.

Jimmy Gama, national treasurer of Amcu, said that while union members were upset about the recognition agreement, this had been the situation since October last year, and it could not be denied that Tuesday's events were prompted by Steven's death.

"I can assure you that, if Steven was alive, this [Tuesday's strike] wouldn't have happened," Gama said.

But Steven is dead. Although he did not die on the Marikana koppie in August last year, his death probably drove the Lonmin workers back there. And in the middle of this lingering uncertainty, the miner's words on Tuesday are a throwback to those uttered by Daduvayo Bongo – an NUM branch secretary who was killed on October 5.

On August 13, three days before the massacre, he offered a chilling premonition about Marikana.

Said Bongo: "People are sitting on the mountain and planning. Then they come down."