Olufemi: Reed between the lions 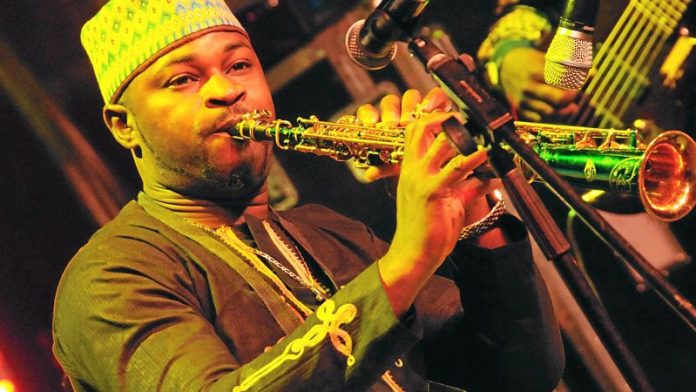 Nigerian-born Afrobeat saxophonist Olufemi has chosen Johannesburg as his base mainly because of the city’s tag as a “gateway to the world”.

The move seems to be working for the self-proclaimed representative of the African renaissance, who says it has afforded him the opportunities that might not have been possible in his native country.

Being based in Johannesburg has led to sharing stages with other African artists who visit the country. Olufemi says he looks up to the constellation of African stars such as Salif Keita, Baaba Maal and Hugh Masekela.

After eight years in South Africa, there is nowhere else Olufemi would rather be. “Johannesburg is the best position for people to get informed  about [African] music. I could go anywhere else in the world but I would rather be rooted in Africa,” he says.

His reception in South Africa has been “good”, he says, although he admits that his music generates much more excitement in Europe, where he will tour this year.

Olufemi released his debut album Just in Newtown in 2008 and, in 2010, he released the collaborative instrumental project with South African musicians, titled Loxion Praise.

The best part of the project for Olufemi was “the coming together as Africans, creating a better African sound, which I preach in my music”. He has recently finished working on his new album, which will be released later this year.

Olufemi will be performing at the ninth annual Africa Day concerts at the Bassline in Newtown this weekend.

He will be performing alongside artists such as Lira, Thandiswa Mazwai, Tanga Pasi, Della & Friends, Guy Buttery and Niger’s Alhousseini Mohammed Anivolla.

What can people expect from you at the Africa Day concerts?
I am really looking forward to celebrating Africa and sharing the stage with the artists on the line-up, as most of them are my friends. I will be playing tunes from my new album because I know people have been waiting for new material. There will be dance songs and it will be really vibey. It’s going to be good.

Who are some of your favourite South Africans?
Yvonne Chaka Chaka, Hugh Masekela and Ringo — they are the people who I really enjoy.

What is the best thing about ­African music right now?
The rhythm. You can’t do without it, and that for me is everything in music.

What is your favourite genre of music?
Besides Afrobeat, it has to be African funk for the soul in it.

Where do you like hanging out that has just about the right amount of atmosphere for you?
It used to be Newtown but at the moment nothing is happening, with all the live venues shutting down there. I would say Norwood because not much else is happening in Johannesburg.

What are you currently playing in your car?
Loxion Praise, my own project.

Do you have a favourite song right now?
It’s a song from the same project, Ofana Nawe.

When you want to escape Jo’burg, which city or town do you like to visit?
I really love Clarens in the Free State. Clarens is very artistic and all about the art. People don’t usually classify being an artist as being a professional, so I really love it that the town celebrates art.

What is your favourite food?
Only my wife can answer that question.

What is the last film that you watched that blew you away?
I know it’s quite old but it’s The Italian Job. I loved the sophistication of the production and the logistics behind the movie.

Olufemi will be performing at the ninth annual Africa Day concerts on May 24 and 25 at the Bassline in Newtown. The shows start at 9pm and tickets cost R150