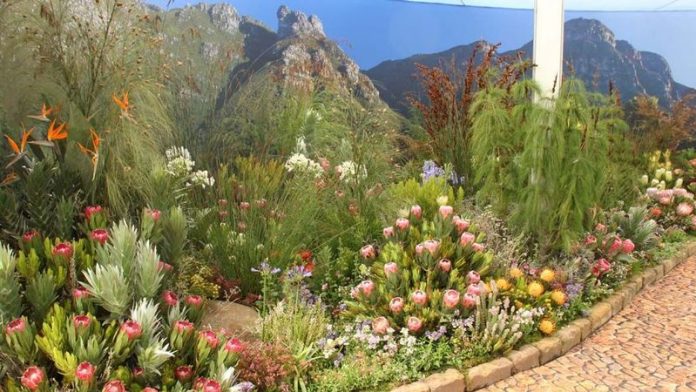 This week South African newspapers were full of news of the country’s gold medal received at the
famous Chelsea Flower Show in London. The medal – the 33rd awarded to South Africa by the Royal Horticultural Society – was received by designer David Davidson and horticulturalist Raymond Hudson on behalf of the South African National Biodiversity Institute.

Their stand at the Chelsea Flower Show was a celebration of the centenary of the Cape’s Kirstenbosch National Botanical Garden and it sought to accurately replicate a number of locales in the garden. According to the official description of the installation, “The display is an enclosed reconstruction of the Central Garden and Dell – the oldest and most beautiful parts of the Garden.

“The circular, walk-through exhibit features the Dell and Cycad Amphitheatre on one side, and the Protea Garden and mountain skyline on the other. The overhead sky canopy enhances the sense of quietude that enfolds the Garden.

“The display features some of the ‘centenarians’, our oldest and most distinguished residents. These are plants that have been growing at Kirstenbosch for a hundred years or more, or were introduced during the first five years, from 1913 to 1917, and are still here today.”

Coincidentally, the Chelsea Flower Show, which ends on May 25, also celebrated its centenary this year.

In an interview from London, Davidson, who has been involved with the designs of the South African display for 20 years, said that the flower show continued to provide “a valuable platform [for] South Africa to market itself”. Foreigners who had visited South Africa, as well as expatriates who had, over the years, queued to be photographed in replicas of real locations.

Challenges facing the designers
Last year, Davidson said, the country had featured four biomes including the Cape’s fynbos biome and the Karoo biome. “We used gateways, iconic architectural features: a Cape Dutch gateway on the mountainous fynbos side, and we had a traditional Ndebele archway from the Limpopo side,” Davidson said.

He said that the challenges facing the designers and organisers included the fact that South Africa is heading into winter while the northern hemisphere is beginning to celebrate summer. Davidson and Hudson had required all the necessary permits and documentation to be in place from various authorities in South Africa and in the UK. And they were “restricted by the fact that we cannot bring any live plants into the UK whereas almost every other plant at the exhibit is a live plant, and a collection of the very best live plants available at the time.

“We recreate our exhibit, which is usually a naturalistic landscape, using entirely cut flower material because there is a prohibition on the export of soil from South Africa,” Davidson said.

By contrast, Jan Blok – one of the country’s top landscape gardeners and author of the book A Sense of Space (Struik Lifestyle) – said that he favours an approach to exhibition design that will shock rather than seduce.

“The permanent landscape is just that, permanent, so we try and make it timeless. Whereas, with a show stand you always have to make it a little bit shocking,” Blok said about the concept for his featured work at the Grand Designs Garden & Home Show in Johannesburg this weekend.

'Colour is coming back'
“We are not trying to create an outside garden inside,” Blok said. “We have gone for a whimsical stand. In concept we have tried to highlight a bit of colour this year – colour is coming back, especially all the pastels. We have created a forest with indigenous trees. The whole thing is indigenous and uses smoke to wow the crowds.

“We have also mixed in a bit of the modern. We have got sleek modern benches; antique Versailles wooden planters and we have it all in bubblegum pastels of blues, pinks. So we have mixed the modern and the old, with fabric and indigenous plants."

Blok’s design has something of a surreal, African Alice in Wonderland feel to it. The mini parkland has heightened contrast between European and African elements with indigenous flowers, pelargoniums and thorny fever trees.

Blok has described his design as being “quite off”, which is brave given that it is intended to seduce big crowds who may want to replicate his concept in middle-of-the-road suburbia.

South Africa’s contribution to this year’s Chelsea Flower Show will be on display at the V&A Waterfront in Cape Town from August 31 until September 24. The Grand Designs Home & Garden Show takes place at the Coca-Cola Dome in Northgate, Johannesburg, until May 26.