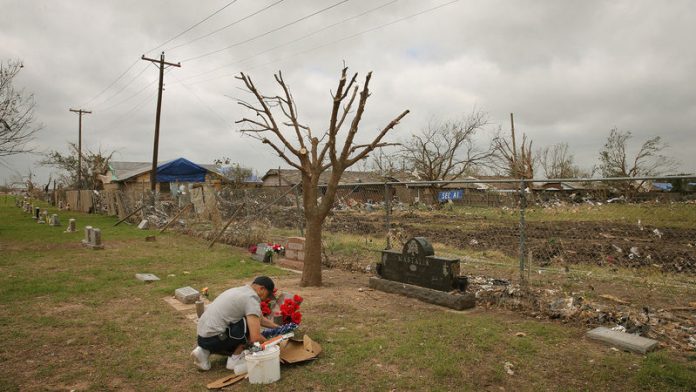 Weather forecasters declared a emergency for parts of the tornado-prone midwestern state, amid reports that several twisters had struck the area around Oklahoma City.

One large tornado touched down west of Oklahoma City, the state's biggest city, news reports said, but no injuries were immediately reported.

Oklahoma Governor Mary Fallin said late Friday that she was "heartsick" that Moore, struck by a powerful tornado on May 20, could be hit once again.

"I'm here across from the capitol and it is hailing and blowing and raining extremely hard. Our tornado sirens have gone off several times," she said.

Direct line
Fallin said she was particularly worried about high traffic on the midwestern state's major highways, which could be in the direct line of the tornado.

"We hope this storm passes through and it's just some rain and hail. But we do know the winds are whipped up pretty good and it's just a loud rumble outside. It was hailing just loud from all the thunder and lightning," she told CNN.

News reports said multiple vehicles were overturned, including tractor trailer trucks. The Oklahoma Highway Patrol announced online that one main thoroughfare, Interstate 40, has been shut down due to the threat.

KFOR television meanwhile reported extensive damage around the cities of El Reno and Yukon, with 22 000 customers without power.

The eye of one strong funnel cloud – nearly 1.6km wide – was barreling toward downtown Oklahoma City to the south, according to KFOR.

The National Weather Service issued a tornado emergency for the city and some of its suburbs, hinting at the potential for casualties and large-scale damage.

Violent tornadoes
Officials for Oklahoma City's Will Rogers World Airport said on Twitter that passengers had been evacuated to an underground tunnel.

"No flights are arriving," it added. "Please do not come to airport to pick-up until threat has passed."

The National Weather Service's Storm Prediction Center in Norman, Oklahoma issued a forecast for "a few strong to violent tornadoes, very large hail and intense damaging winds over parts of the Southern Plains to the Ozark Plateau."

Forecasters said the hail could be larger than the size of a baseball, with wind gusts greater than 60 miles per hour.

The Moore tornado affected a total of 33 000 people, and had winds above 200 miles per hour.

With an average of 1 200 tornadoes per year, the United States is the most hurricane-prone country in the world. They are particularly prominent in the Great Plains states of Kansas, Oklahoma and Texas, as well as in Florida.

Southeastern Kansas, southwestern Missouri and central to northeastern Oklahoma were most likely to bear the brunt of the storm, according to the National Weather Service.

Severe storms were also forecast to strike across the upper to middle Mississippi Valley and the Midwest. – Sapa-AFP

Covid-19: Why it is so difficult for Africa to ‘flatten the curve’

During his address at the World Economic Forum’s Davos Dialogues on Tuesday, the president implored countries hoarding vaccines to release their excess doses
Advertising