Turkish alcohol laws could pull the plug on Istanbul nightlife 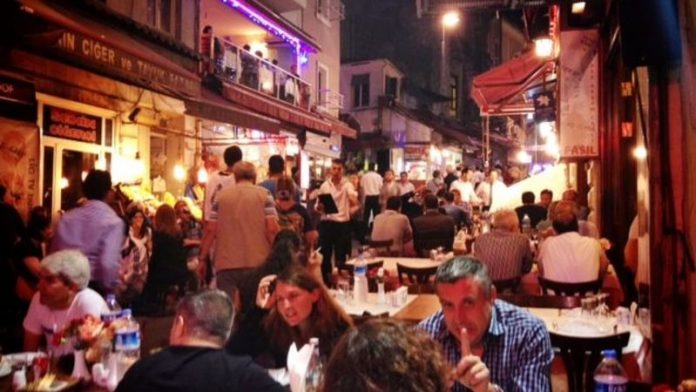 In the Siirci bar in a backstreet of Istanbul's bustling Beyoglu district, a few patrons are enjoying a cold beer. Flyers for LBGT (lesbian/bisexual/gay/transgender) rights and environmentalist demonstrations are scattered on a small table with feminist magazines stacked alongside.

"Places like ours do not fit in the AKP's vision of Istanbul," says manager Haydar Tas of the party that has governed Turkey for the last decade. "And restrictions on alcohol consumption will make things harder for us."

In a surprise move last week, the Turkish parliament rushed through strict legislation that, once approved by President Abdullah Gül, will curb alcohol sales and drinking in Turkey.

The planned regulations would prohibit retail sales between 10pm and 6am, ban all alcohol advertising and promotion, and stop new shops and bars from opening within 100m of schools and mosques.

As is already the case with smoking, the depiction of alcohol consumption in films and on television would be blurred.

Retailers are worried about the likely impact on business.

"I make most sales after 10pm, and I sell mostly beer and wine," says shopowner Rafi Siropyan (35). "Our family has been running this shop for 40 years, but I am afraid that I might have to look into alternatives."

Worldly pleasures
Turkey is no stranger to teetotal campaigns or clampdowns on booze. In the Ottoman era, some sultans imposed similar restrictions. But alcohol consumption has always been a part of food culture in Turkey, a country whose population is 99% Muslim.

Members of the opposition Republican People's party (CHP) compared AK party MPs who drafted the bill to Ottoman sultan Murat VI, who was known for his puritanical stance on worldly pleasures such as drinking and smoking. He is said to have patrolled Istanbul's streets incognito in order to root out offenders.

"If Turkey really is a secular state, then the government should not have the right to tell me when and where to drink alcohol," says Seref Acehan, 69, a master butcher and Beyoglu resident. "As long as I don't harm others, drinking is a matter of my own personal freedom."

Not everyone agrees. A government supporter, Veli Köseoglu (56) thinks that the bill does not go far enough: "If people are unable to buy alcohol after 10pm, they will simply stock up beforehand. What kind of restriction is this supposed to be?"

He lives in Ortaköy, a neighbourhood known for its lively bar scene.

"On weekends, people get drunk in the streets, they swear and start fights. It makes me uncomfortable. In my opinion, drinking should be banned in all public places such as buses or parks."

The government argues that the crackdown is only aimed at improving public health and protecting children. It insists that it does not amount to a ban.

"The bill doesn't ban alcohol consumption, it simply regulates it", AK party MP Nursuna Memecan told the Guardian. "People in Turkey have been scared into seeing religious fundamentalism around every street corner. It is important to protect young people from harmful substances."

Critics point out that such concerns are hardly justified: at only 1.5 litres a year Turkey has the lowest per capita alcohol consumption rate in Europe, and 83% of the population does not touch alcohol at all.

Mounting authoritarianism
Some fear that the proposed law is a further step towards Islamisation of the country. Speaking at an AK party meeting this week, prime minister Recep Tayyip Erdoğan underlined that religion commanded "what was right".

"They use public health concerns as a thinly veiled excuse to impose their own lifestyle on everyone in Turkey," said one 45-year-old cornershop owner, asking not to be named for fear of repercussions. "If things continue like this, they will soon pass laws that regulate how people should dress."

Others are worried about mounting authoritarianism in Turkey.

"Our government interferes in everything: they tell us how many children to have, how much salt we should put in our food, what kind of bread to eat and what to drink," Acehan said.

"Many European countries might have similar alcohol restrictions, but they have full democratic rights. They discuss laws before they are passed. I wish we would have this kind of mutual understanding in Turkey."

Haydar Tas is convinced that the drink curbs are aimed at appeasing conservative Muslim voters: "With so many more important problems to solve, there really is no need for alcohol restrictions in Turkey. If they are so concerned about freedom of religion, why don't they solve the headscarf issue instead of curtailing other people's choices?"

Sitting in his small bar in Beyoglu, he does not have much hope that things will change for the better.

"The AKP government wants to control what Beyoglu looks like, and who can be here. In the future, there will be no room for alternative places like ours. All leftist opposition groups, associations and cultural spaces will be rooted out, and the only place to get a drink will be expensive luxury hotels and restaurants. It will be the end of Beyoglu as we know it." – © Guardian News and Media 2013