When in doubt, call Motlanthe – the political exorcist 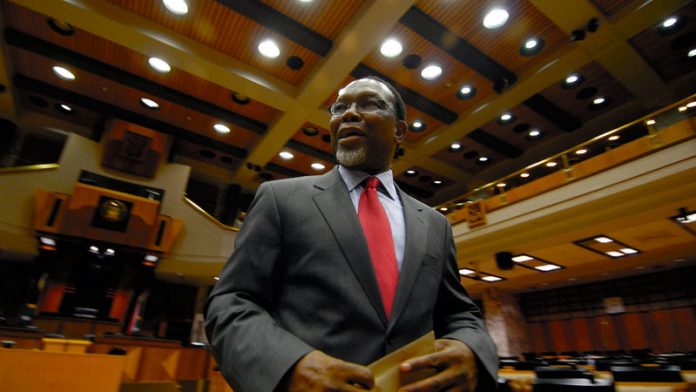 There is a song that has been playing in my head over the past few weeks. It is set to the tune of the Ghostbusters theme song. It goes something like this: "If there's something strange in your nation-hood/ Who you gonna call?/ Motlanthe!

"If the rand's gone bad and it don't look good/ Who you gonna call? Motlanthe — he ain't afraid of no strikes!"

Critics might argue that the deputy president is one of the walking dead after last year's Mangaung conference, politically speaking anyway. Perhaps that is why he has so routinely been called upon to sort out the intractable, angry poltergeists stalking our economy.

Got a problem with e-tolls? Send in Motlanthe. Desperate and furious farm workers blocking the N1 at De Doorns? Call Motlanthe. Warring unions and their mining bosses deadlocked, sending investors fleeing in terror? Somebody, for heaven's sake, call Motlanthe!

The deputy president has been handed some of the thorniest ­political tasks Cabinet has to offer.

When the state finally began to comprehend the public's unhappiness with e-tolling, it set up the interministerial committee on the Gauteng Freeway Improvement Project, under the deputy president.

Concerns over e-tolls
Just last week, he met church leaders to discuss their concerns regarding the commencement of e-tolls and their effect on the poor.

Following the outbreak of violent strikes by farmworkers over minimum wages in the Western Cape, it was the deputy president who was tasked with leading a series of public engagements aimed at finding ways to address some of the systemic problems facing the ­agricultural sector.

In his bid to ease concern about the economy two weeks ago, which coincided with the rand's collapse, President Jacob Zuma named his deputy to head a team of ministers to lead talks between unions and mining companies.

To this unenviable to-do list you can always add his role as the head of the National Nuclear Energy Executive Co-ordinating Council, the body that oversees the implementation of the country's nuclear energy policy.

The council is less involved in headline grabbing events, but it is deliberating a nuclear build programme that is expected to dwarf the country's infamous arms deal.

Motlanthe's spokesperson, Thabo Masebe, said this is all par for the course in government work.

"When there are matters of a cross-cutting nature, involving many departments, it should be driven by the presidency," he said.

Vague job description
The deputy president's job description is left necessarily vague so that he may assist the president in the work of governing the country wherever he is needed, said Masebe.

The freeway improvement interministerial committee has nearly completed its work, he said, with the body "almost at the end of the resolution of a few outstanding matters".

The reason the deputy president was chosen to head talks in the agricultural sector was because many of the issues in this area intersect the work of the ­government's antipoverty programme, which Motlanthe leads.

The deputy president also led the government's planning for the successful 2010 Fifa World Cup. Lest we forget, during this time, he was also heavily involved in the state's framework response to the financial crisis that spread across the globe in 2008.

Despite his election loss at Mangaung, Motlanthe is expected to complete his term as deputy president.

He chose not to accept nomination to the ANC's national executive committee, leading to speculation that he, along with other high-profile figures such as Trevor Manuel, may be retiring from political life.

Whatever the outcome after the 2014 elections, it is unlikely that the spirits stalking the country will disappear anytime soon.

One wonders though, where its most experienced ghost-buster will be, when his term ends post 2014?