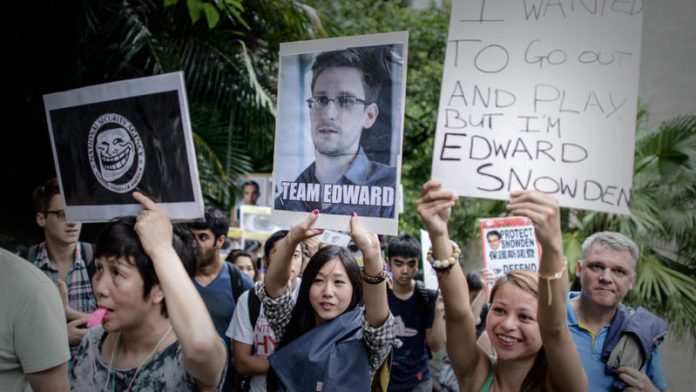 Snowden has exposed not only US cyber-espionage but also political fault lines in Asia.

In retreating to Hong Kong and vowing to fight any extradition attempt, the former CIA analyst is testing its civil liberties and will set a landmark on whether the city can govern itself without interference from Beijing, experts said.

"I'd be concerned if China oversteps its power because every time it does, it opens up more opportunities for it to do so in the future," said Billy Leung, one of several hundred people who attended a rain-drenched rally in defence of the self-styled whistle-blower on Saturday.

"I think it would be very important for Hong Kong to be able to safeguard their right to decide on the terms of his extradition if there is such a request being put to us," the 28-year-old translator told Agence France-Presse.

Hong Kong's government is vowing to let the law take its course in its handling of Snowden, who arrived in the city in late May with a trove of documents on US cyber-spying that he has leaked to the press.

While the US government has yet to file any formal extradition request, a weekend newspaper poll found that half of Hong Kongers objected to sending him back.

Hong Kong, which retained a separate legal system after returning to China in 1997, has an extradition treaty with the United States but Beijing has the potential to veto any ruling, and suspicion is rife that it will step in.

Governed by public opinion
The suspicion is stoked by longstanding concerns that China does not want to allow greater democracy in Hong Kong and, in its responses to constitutional appeals by the city's own leadership, has ridden roughshod over public opinion.

"That fear of Beijing interference is always prevalent in Hong Kong on every front," pro-democracy lawmaker Claudia Mo told AFP.

"Most people would tend to suspect that there would be some form of Beijing intervention, not overtly of course," she said.

Some Chinese state media said Beijing should in fact be governed by public opinion in the Snowden case. The Global Times said on Monday that extraditing him would be a "betrayal" of his trust and a "face-losing outcome" for China and Hong Kong.

"Extraditing Snowden back to the US would not only be a betrayal of Snowden's trust, but a disappointment for expectations around the world," it said. "The image of Hong Kong would be forever tarnished."

Beyond the perennial debate about Hong Kong's political system, ordinary citizens have vented anti-China anger on an array of issues ranging from high property prices to rude mainland tourists and shortages of baby milk powder.

Snowden's interview with SCMP
"My intention is to ask the courts and the people of Hong Kong to decide my fate. I have been given no reason to doubt your system," Snowden told the South China Morning Post last Wednesday, in his first interview since unmasking himself to the Guardian newspaper on June 10.

In the newspaper interview, Snowden described hacking by the US National Security Agency of router networks in the city and the Chinese mainland. Some observers believe Beijing has a strong interest in grilling him further about what he knows.

But many analysts said the US-China relationship is too important to be sacrificed over the 29-year-old contractor and anticipate a quiet deal to hand him over, regardless of whether Hong Kong courts rule to let him stay.

"This is going to affect the Sino-US relationship, so Beijing will step in and ultimately, it will have a big say in terms of how this is going to be solved," said Ma Ngok, a professor at the Chinese University of Hong Kong's department of government and public administration.

But Snowden is appealing to popular opinion as much as to the courts – and that has proved a potent force in Hong Kong even if the city still lacks universal suffrage.

Last September, the government was forced to back down on a plan to make Chinese patriotism classes mandatory in schools, after tens of thousands took to the streets in protest ahead of legislative polls. – AFP