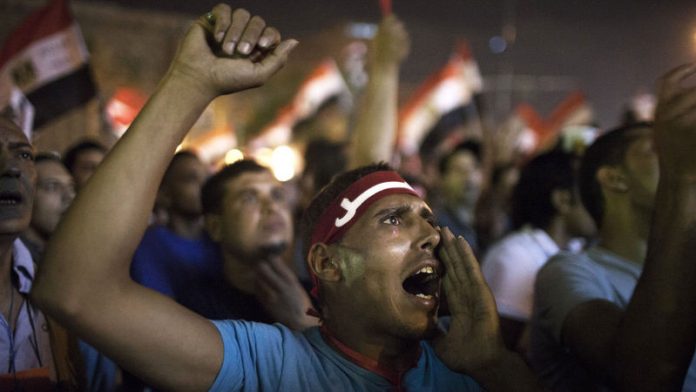 Essam el-Haddad, the president's national security adviser, said on Wednesday that a "military coup" was under way and army and police violence was expected to remove pro-Morsi demonstrators.

"In this day and age no military coup can succeed in the face of sizeable popular force without considerable bloodshed," said el-Haddad.

Meanwhile, as an army deadline urging him to meet the people's demands expired, Morsi on Wednesday proposed a consensus government as a way out of the country's crisis.

"The presidency envisions the formation of a consensus coalition government to oversee the next parliamentary election," his office said in a statement on Facebook.

Earlier on Wednesday, Morsi reiterated his call for a national dialogue and the formation of a panel to amend the country's controversial Islamist-drafted Constitution.

But he insisted he would stay on as president.

Morsi resignation demands
He said there was a "clear roadmap which is based on constitutional legitimacy … and [it] includes the formation of a temporary coalition government based on national participation to oversee the coming phase."

"There would be an agreement from all political trends over the [choice of] prime minister," his office said.

Morsi stressed again he was a "president for all Egyptians" amid fears of unrest as his supporters and opponents protested in Cairo.

On Sunday, millions of Egyptians poured into the streets to demand Morsi resign.

Relishing the possible downfall of one of Assad's most vocal critics, Syrian television carried live coverage of the huge street demonstrations in Egypt demanding Morsi's departure.

"[Egypt's] crisis can be overcome if Mohamed Morsi realises that the overwhelming majority of the Egyptian people reject him and are calling on him to go," Information Minister Omran Zoabi was quoted as saying by the state news agency SANA.

He also called on Egyptians to stand against the "terrorism and threats" of Morsi's Muslim Brotherhood supporters.

The Syrian branch of the Muslim Brotherhood is one of the most powerful factions behind the mostly Sunni Muslim uprising against Assad, who belongs to the Alawite sect, an offshoot of Shi'ite Islam, and is being helped by Lebanon's Shi'ite Hezbollah militia.

Mursi has expressed support for foreign intervention against Assad and attended a rally two weeks ago calling for holy war in Syria.

A month ago, Syria responded to a wave of protests against Turkish Prime Minister Tayyip Erdogan, another fierce opponent of Assad, by calling on him to halt what it said was violent repression and step aside. – AFP, Reuters