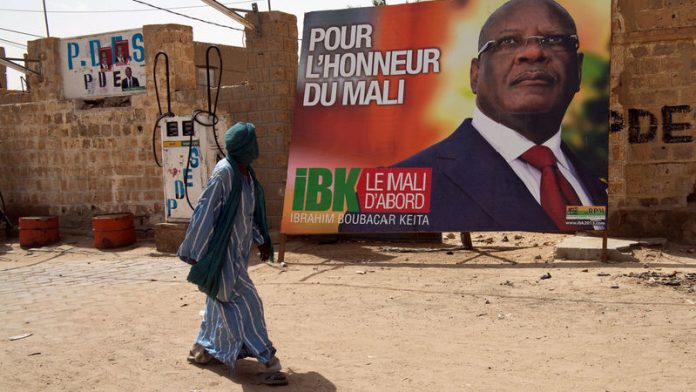 Thousands of UN troops kept the peace on Sunday as Mali went to the polls in an election that many hope will mark a fresh start for the country after a rebellion in the north, a military coup and an Islamist uprising that led to an invasion by French troops in January.

Early indications were of a record turnout in much of the country, where voters were choosing from 27 presidential candidates all pledging to restore peace.

"We are all still recovering from the war in the north. These elections are not perfect, but we have to vote now to restore some calm to our country," said Ibrahim Sory, a resident in Bamako who queued up early in the morning to cast his vote.

In Kidal, in the far north of Mali where an uneasy peace prevails after the Tuareg separatist group the National Movement for the Liberation of Azawad (MNLA) allowed in UN troops, voters braved the presence of heavily armed soldiers to cast their ballots.

There were renewed security concerns in the region after the Movement for Oneness and Jihad in West Africa (Mujao), one of the al-Qaeda-linked groups that seized part of Mali's north, said they planned to attack polling stations, according to the Nouakchott Information Agency, a Mauritanian website used by the jihadists to post messages.

One voter in Kidal reported having been threatened for taking part in the elections. "I know only of the nation of Mali, and that's why I came to vote," Fatina Walet Alitine, a member of the Tuareg ethnic group, said. "The [MNLA] don't like this. They told us not to vote. They told me that if I vote, they will break my arms. So I said, 'Well, then you better break my arms.'"

Targeted violence
Residents said Tuareg youths took to the streets of the desert town on Thursday to target black African residents, firing shots and burning vehicles. Calm was briefly restored after UN peacekeepers made some arrests, but violence resumed on Friday.

Tension between black Africans and Tuareg separatists, who have regularly instigated uprisings demanding an independent state in the Sahara desert since Mali obtained independence from France, is at the root of recent events in the west African country.

Last year relatively low-ranking soldiers protesting against conditions in the under-resourced army as it battled the MNLA toppled Mali's civilian government in a military coup. The collapse of the government paved the way for the MNLA to consolidate power over northern Mali, an area roughly the size of France.

The MNLA, bolstered by money and weapons from fighting on behalf of Colonel Gaddafi during the uprising in Libya, joined forces with and were subsequently ousted by al-Qaeda-linked jihadist groups. The groups, including al-Qaeda in the Islamic Maghreb (Aqim), Mujao and Ansar Dine, have long been entrenched in the complex web of business and Islamism in northern Mali, using the vast, ungoverned territory as a source of recruits and income from the trade in illicit cigarettes and narcotics.

Despite widespread jubilation in Mali when a military intervention by French and African troops ousted the jihadists this year, many have criticised the former colonial power and other western donors for pressuring Mali into holding elections before the country was ready.

'Forget all the little things'
Sory said: "I have my voter registration card, but I'd say about 30% of people don't. Many are outside the country, and everything was organised at too short notice for them to be able to come back and register to vote. It is true that the elections have been rushed, and it's difficult enough to organise things here in the best of circumstances.

"But we need to have the election now, and forget all the little things which can go wrong," Sory added. "The more we wait, the more there will be problems. I think it's better to organise these elections now. If something can be better, we have a result, there is a new government officially in place, and the work can start."

In France, where an estimated 200 000 Malians live, there were reports of chaotic scenes with polling stations opening late and many voters unable to cast their ballot.

But observers said that all appeared to be going smoothly in Mali. "So far it's going quite well all over the country," said John Agyekum Kufuor, former president of Ghana and head of a 250-man observer mission of the Economic Community of West African States. "Indications are that things have been very orderly from the beginning. People are going about voting with any disturbances. We are closely following what's happening in the north, and we have observers on the ground there who are in touch with us. So far in Timbuktu, Gao and Kidal, in all these places people voting."

A total of 6.8-million people of Mali's population of 15 million are registered to vote. They are choosing from candidates including the former prime minister Ibrahim Boubacar Keita, known by his initials IBK, and Soumaila Cisse, an ex-finance minister and current head of the West African Monetary Union.

Despite being regarded by the international community as one of Africa's most stable democracies in past decades, many Malians long regarded previous civilian governments as ineffective and corrupt, with elections often marred by low turnout and alleged irregularities.

Monitors said early indications were that a high number of voters were turning up to vote this time. "The surprise, from what I have observed, is really the high turnout – it is quite a number, we believe about 60%," Kufuor said. "I have been in polling stations since the morning and everywhere, there are long queues. I get the feeling that, after the war, the people really want to restore peace and take control of their country." – © Guardian News and Media 2013