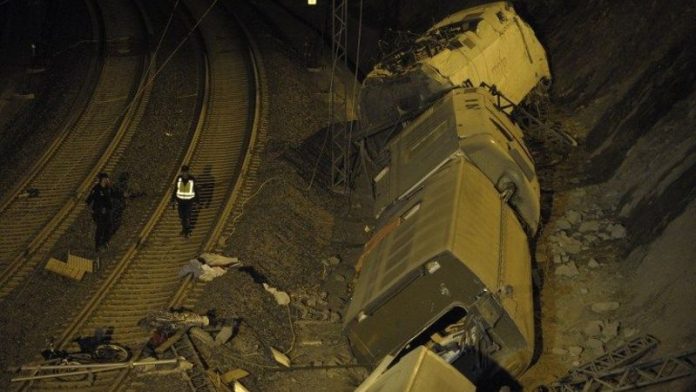 The driver, Francisco Garzón, has been provisionally charged with multiple counts of negligent homicide.

In an official statement, the court handling the case said Garzón was responding to call from state-owned train operator Renfe when the high-speed train derailed last week, raising questions about firm's role in the disaster.

The train derailed and slammed into a wall as it was approaching Santiago de Compostela on a journey from Madrid to Ferrol in north-western Spain. The death toll from the accident stands at 79.

In a statement, the court said that "minutes before the derailment, [Garzón] received a call on his professional telephone to signal to him the route he had to take on arriving in Ferrol. It appears, from the content of the conversation and the background noise, that the driver consulted a plan or some similar paper document."

The person on the other end of the telephone "appears to have been a controller", the statement said. The existence of the conversation emerged from an inspection of the "black boxes", which began in the presence of the investigating magistrate on Tuesday morning.

New dimension to investigation
News of the call Garzón took adds a new dimension to the investigation and for the first time raises questions about Renfe's role. Garzón who was only a few kilometres from Santiago del Compostela station when he answered the telephone, could have been called when the train was stationary.

Since the disaster, the heads of Renfe and the network operator, Adif, have put the responsibility squarely on Garzón. But the driver's union has expressed concern that he was being blamed before the analysis of data from the onboard recorders.

Garzón was charged when he appeared before the investigating magistrate on Sunday. He was freed from custody on condition that he surrendered his passport and agreed to report to the court once a week.

Spanish news agencies, quoting police and court sources, said that he admitted he had acted recklessly. But, according to subsequent versions, he said he was confused as to which bit of the route he was travelling on.

The Spanish daily El País said one of the first people to speak to Garzón after the crash was the police inspector who took command of operations at the scene. The paper said that, in the report he later submitted, the police commander recalled that he had asked the driver how he was.

He quoted Garzón as replying: "I'm slightly injured. But I'm not what is important. What's important are the passengers." Then, on three occasions, he said: "I've fucked it."

Defending Garzón
Colleagues and neighbours of Garzón came forward to defend him, describing him as a responsible and cautious driver. Juan Jesus Garcia Fraile of the railway workers' union cautioned that, without the data from the black boxes, "we do not know what happened".

The view taken of the crash could have important financial repercussions. Spain has been a pioneer of high-speed rail traffic and has an important railway construction industry. Renfe is among firms bidding for a €13-billion contract to build a high-speed rail link in Brazil. The terms of the tender reportedly exclude firms involved in the running of systems where an accident has taken place in the preceding five years.

The most deadly previous crash in Spain was in 1944 when up to 800 people are reckoned to have died at Torre del Bierzo in the centre of the country. – © Guardian News and Media 2013