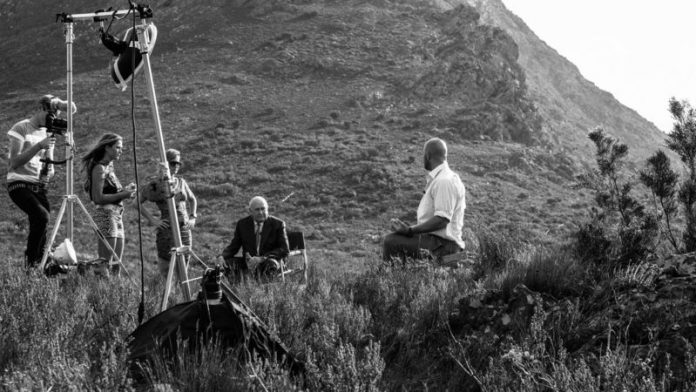 From Nelson Mandela’s noble face reflected in a hand-held mirror to FW de Klerk sitting like Buddha on a mountain and Desmond Tutu dancing next to a suspended ballet tutu, there is no doubt that the portraits are unique, thought-provoking and, in some cases, deferentially cheeky.

The first portrait and documentary, of Mandela, was released on July 28. So far it has been revealed that Tutu, De Klerk, Kumi Naidoo of Greenpeace and anti-apartheid activist Sophia Williams-de Bruyn are featured in the project.

The rest of the list will be revealed weekly with a collectable poster insert in the Sunday Times and a Sunday night airing of the documentary on the SABC.

Each week’s documentary then becomes available to the public to view and share online. The project has international media partners such as the Wall Street Journal and the London Times and could reach 250-million people.

The Mail & Guardian spoke to the project manager and head photographer Adrian Steirn about 21 Icons.

What inspired the project?
I wanted to tell the stories of men and women other than the obvious who were propelling South Africa forward into the 21st century.

Around the world, I would get asked: What is going to happen when Nelson Mandela dies?

I tried to explain that South Africa is a self-sustaining country with many amazing people in it, but it struck me that it would be more effective to show people rather than tell them. We need people around the world to realise that Mandela’s legacy is far bigger than just one person &ndash; his legacy is a positive South Africa that believes in itself.

A lot of research went into finding South Africans with extraordinary stories to tell but the project is not about who made it on to the list and who didn’t. It is more about illuminating positive stories and helping South Africans to realise that there are good people working with us and among us right now.

We were fortunate to have Mandela and other icons like Tutu agree to be part of the project but we didn’t just want to celebrate them &ndash; there are many lesser-known heroes responsible for so much incredible change.

What was the idea behind the portraits and parallel documentaries?
The idea was to shoot a set of portraits that were completely different to anything else that had been shot of these icons before. I wanted the portraits to have meaning and purpose.

After each photoshoot, I interviewed the icon and we decided to film little documentaries using the interviews and behind-the-scenes footage of the process on the day.

Some people were surprised that we were being given such great access to these people and yet weren’t taking the opportunity to do TV or hardtop cinema documentaries.

But I was focused on this being a multimedia project because I wanted everyone to see and share the photos and films. I envisioned people engaging with these human stories and sharing the short films. And each week there would be a new piece of film, a new person to empathise with. It was about starting a movement, I guess.

Why do you think your team was given this access to some of the world’s most valued icons?
I think the icons, managers and families gave us access because we had an honest approach to filmmaking. We didn’t show up with massive film crews and five producers; we showed up as a team of people who were like a family. There was full disclosure: we shared our vision and got input from each of the icons. Many of them came up with ideas like incorporating additional elements in their portraits and it was amazing to negotiate that process and have them buying into the project.

By the time the portrait was shot, they were as proud of the final image as we were. And that made the interviews afterwards flow with complete openness.

What were some of the highlights of the project for you?
Having Mandela see our work and be involved with our project was huge. Every person who was in the room the day we shot his portrait will forever be touched by the experience.

Some of the people we photographed weren’t part of my consciousness at all before the project. Naidoo, the international executive director of Greenpeace, is one of the strongest, most intense and charismatic people you will ever meet but, I’m ashamed to admit, I hadn’t heard of him before this project.

Now, I’d go to war for him &ndash; these sorts of people have that kind of effect on you.

The De Klerk portrait was a key moment for us early on in the project &ndash; it shifted the paradigm of what we thought we could do.

When De Klerk sat for that portrait, barefoot, legs crossed and palms heavenwards in meditation on top of a mountain, he was doing something that pushed him entirely out of his comfort zone. The fact that he was willing to compromise because he trusted us to take a beautiful portrait gave us a lot of confidence.

What is the driving purpose of the project?
It would be flippant to say this is a nation-building exercise because every day we wake up South Africa is building a nation.

This project is really about celebrating the positive rather than a dwelling on the negative. The message is that there is so much to be grateful for, so much joy, and through these 21 icons we are shining a light on a South Africa that believes in itself.

View the slideshow at mg.co.za/21icons