Children are exposed to a minefield of labour, mercury for the sake of gold 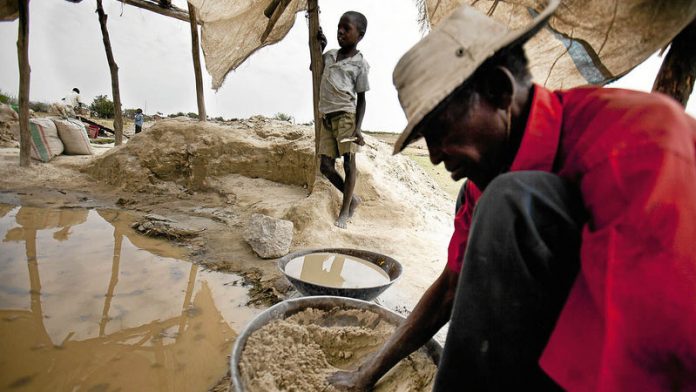 Human Rights Watch has called on the government of Tanzania, along with donor organisations and gold companies, to take urgent action to curb the high rates of child labour and regulate the use of mercury.

In a 96-page report published this week the United States-based lobby group paints a grim picture of artisanal gold mining in the East Africa country, which, in 2011, was the continent’s fourth-largest gold producer.

Children, many of whom are orphans, are involved in every stage of artisanal mining, from digging with picks to carrying heavy rocks, mixing gold ore with mercury and burning the amalgam to extract gold, which they also sometimes sell directly to dealers. The work is backbreaking and dangerous and can involve being underground for between six and 24 hours. Of the 80 children interviewed on 11 mining sites, some had been injured by rudimentary machinery and others were trapped underground when shafts collapsed.

In addition to the dangers of gas inhalation and other respiratory threats from working underground, a number of the youngsters said they were burning ore with mercury to extract gold and exposing themselves to harmful vapour.

Mercury, a silvery liquid metal once used in thermometers, is highly toxic and attacks the central nervous system. It causes developmental and neurological problems and is particularly harmful to unborn babies and infants.

The researchers found mercury was being burnt inside or next to homes and close to rivers, raising the risk of long-term contamination of water and fish stocks.

The use of mercury to extract gold in hard-rock mining is widespread, but while large formal mining operations use cyanide, most artisanal miners still directly handle mercury and burn it over open flames.

Poor school attendance
It is preferred over other methods because it is easy, cheap and accessible and means miners can work independently to produce their own gold without relying on a middleman.

Beyond the physical risks of mining, the report noted that many of the children who were engaged in labour had poor school attendance and girls in mining communities were being sexually exploited.

“Under international and domestic law, the Tanzanian government is obligated to protect children from violations of their rights, including the worst forms of child labour such as mining and commercial sexual exploitation,” the report said.

“The government should also take measures to avoid occupational accidents and diseases, and reduce the population’s exposure to harmful substances. Scientific evidence shows that mercury is a harmful substance,” it added.

Human Rights Watch said that those who bought gold from Tanzania also had responsibilities and companies should carry out better due diligence to ensure they were not buying gold processed by children.

Referring to the June 2011 United Nations Guiding Principles on Business and Human Rights, it said: “Owners and managers of gold mining operations, national and international gold traders, as well as gold refiners and jewellers have a responsibility to ensure that they do not contribute to unlawful child labour or other human rights abuses.”

The United Arab Emirates is the largest buyer of Tanzanian gold, 10% of which comes from artisanal mines, but the precious metal is also exported to Switzerland, South Africa, China and the United Kingdom.

Socioeconomic drivers
The London Bullion Market Association and the Dubai Multi Commodities Centre have also created gold-specific voluntary standards on responsible sourcing, but,  according to Human Rights Watch, these are largely focused on gold coming from conflict areas such as the Democratic Republic of Congo and do not include references to human rights and forced child labour.

Human Rights Watch notes that the government of Tanzania, in conjunction with partners like the UN’s International Labour Organisation, has taken some steps to reduce child labour practices, but it said not enough was being done to enforce regulations or address socioeconomic drivers of child exploitation.

In 2009 a national strategic plan for mercury management was developed, but the report said it was yet to be implemented. It also said that capacity constraints among labour offices meant mine inspections were infrequent and far from thorough, and few penalties were enforced or violations followed up.

A representative of the ministry of energy and minerals told the research team that village authorities, not mining officials, were responsible for acting on child labour.

Janine Morna, children’s rights research fellow at Human Rights Watch, said: “On paper, Tanzania has strong laws prohibiting child labour in mining, but the government has done far too little to enforce them.”

Some of the organisation’s recommendations to the government include: better mines inspections, withdrawal of children from mines, imposition of penalties for violations, addressing socioeconomic drivers of child labour, an immediate end to mercury use by anyone under age 18, the enforcement of safe mining practices and the promotion of  mercury-free alternatives.

The high price of cigarettes