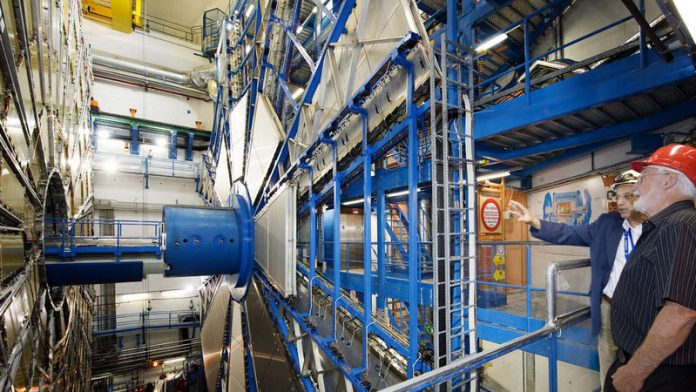 South Africa-designed and manufactured hardware was this week installed on the international Atlas project on the Large Hadron Collider (LHC).

The LHC – which straddles the border between France and Switzerland, about 100m underground – is a massive particle accelerator, owned by the European Organisation for Nuclear Research (CERN). The super-conducting magnets in the accelerator propel two beams of particles – protons or lead atoms – around the 27km ring and smash them into each other in a bid to understand the particles that constitute matter.

There are four experiments, stationed along the accelerator tunnel, to detect what happens when the particles collide. South Africa is involved in two of these: Atlas (A Toroidal LHC Experiment) and Alice (A Large-Ion Collider Experiment).

Last year, CERN announced that they had discovered a particle which may be the elusive Higgs-Boson, a sub-atomic particle that is thought to give matter its mass.

At the moment, the LHC is closed for maintenance and an upgrade to boost the energy at which particles are smashed together.

"On the Atlas detector, you have these drawers of electronics that do all the filtering of the raw data that comes out of the detector," Reed explained. "These electronics have to be verified and checked before the LHC starts up in 2015."

This high-voltage board is part of the mobile test bench that has been developed to check that the electronics are working. This board simulates collision events, in order to check that the front-end electronics are working. "The new mobile testing equipment basically is a mobile box which the detector maintenance people will use to connect to the detector which would run the test on this drawer of electronics," Reed said.

Professor Bruce Mellado of Wits's high energy physics group in the school of physics is more effusive: manufacturing the high-voltage board is "a proof of principle that we in South Africa can deliver with similar standards as our European counterparts. It is also not only anacademic exercise, but a real product that will be used for real detector maintenance of the Atlas detector."

Six boards would be produced, manufactured by the South African electronics industry, to be used for Atlas maintenancebefore the LHC re-opens in 2015, the Wits University said.