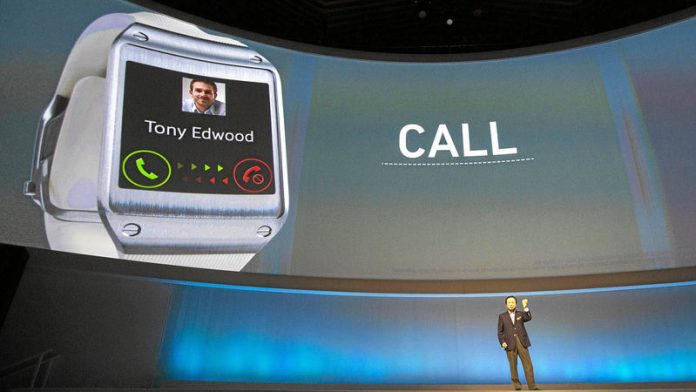 Dick Tracy would be in heaven. The fictional secret agent who had a "wrist TV", which he could also use to make calls, would on Wednesday have had three new "smartwatches" to choose from as Samsung, Sony and Qualcomm jockeyed for position in a space that is expected to be Apple's next target.

Samsung unveiled its much-anticipated Gear, an Android-powered device that works as an extension to a limited number of its phones – only two at present. It is able to show incoming calls and messages on its 4.14cm screen. Users can also use it to make calls, just like Dick. It has voice control, a basic camera and can run a Twitter app, plus another 70 compatible apps, the company said.

Scheduled to ship on September 25, Gear connects using the Bluetooth wireless system to the two other products unveiled by Samsung in Berlin: the Galaxy Note 3 "phablet" – which has a 14.48cm screen – and the Galaxy Tab 10.1, a tablet with a screen comparable to Apple's iPad. It also needs charging each day if it is subject to "moderate" use.

Sony showed off an updated version of its SmartWatch, which is described by the company as "a ­second screen for your smartphone". It can control the smartphone's ­camera, accept or reject calls, run presentations and run similar apps to those on the Gear.

Qualcomm, which is better known for making chips than smartphones, introduced the Toq device, which can play music, handle phone calls and run apps. Promised for October, it has a touch-enabled colour screen that is readable in sunlight.

Smartwatches are a hot field because of mounting expectation that Apple will introduce its own at some point in the next few months – though the best-established company at present is the Californian firm Pebble, which has sold more than 85000 of its eponymous smartwatches. Those connect to Android phones and iPhones, and show messages, calendar details and run some apps. The Pebble is the result of a $10.2-million crowdfunding scheme from individual backers in 2012.

Though Apple has given no direct indication that it is working on a product – beyond a comment by chief executive Tim Cook earlier this year that "the wrist is interesting" – tech companies have decided not to be left behind in case Apple defines a new sector, as happened with the iPad tablet in 2010 and the multitouch iPhone in 2007.

They are also confident that Apple is working on something after its application for a trademark on "iWatch" in Japan, and the hiring of a former Nike executive last month.

Analysts have suggested that wearable technology, and smartwatches in particular, could be big news in 2014. Google is also believed to be looking at the smartwatch field.

"Finding the right price for smartwatches will be hard. The sweet spot will be similar to designer watches such as Rolex versus Swatch," said Carolina Milanesi, a smartphone analyst at research group Gartner.

Samsung seems to be optimistic about its prospects. The Gear "bridges the gap between the mobile device and fashion worlds to create wearable technology," said JK Shin, chief executive of Samsung Mobile.

But for now it only connects to two of the company's scores of smartphone models. And some early testers showed limited enthusiasm.

"The 1.9 megapixel camera is of poorer quality than a typical smartphone camera," said Youkyung Lee of the Associated Press, who tested it before the formal launch. "In addition, moderate use of the device will require a daily battery top-up."

She said that, though some of the features were enjoyable, "after my brief hands-on experience, I decided the first generation of the Gear was cool but not compelling enough to convince me to ditch my iPhone." – © Guardian News & Media 2013

The guitarist’s book, Introduction to South African Guitar Style: Volume One is due to be published at the end of the year
Read more
Advertising
Continue to the category
Business