Cubist symphony in a citadel of corporatism 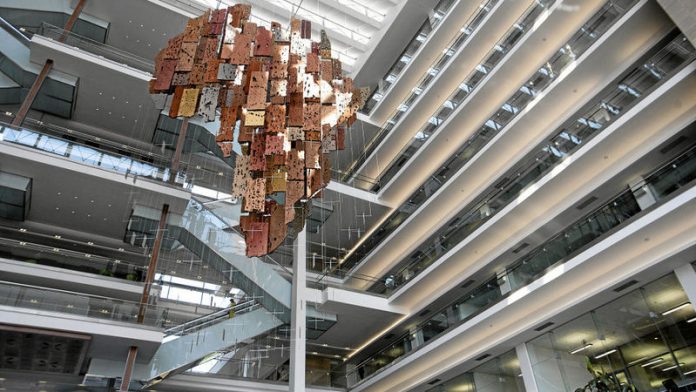 It's unnecessarily corporate, monolithic and lacking in personality. Enormous blocks of glass, bordered by faux stone cladding, are all held together with aluminium.

It reminded me of John Vorster Square, the scary former police headquarters in Jo'burg, in the bad old days.

At a cost of R2.7-billion, the architectural firm GLH & Associates has designed a monument to corporate self-assertion, pandering to a need to stand out boldly from the crowd. In the supposedly consumer-friendly zone of Rosebank, 30 Baker Street certainly doesn't shout "come play with us".

The inside of the building, however, is somewhat different. A giant atrium connects two blocks, east and west. Here, a mighty wall of glass–11 floors high–lets in enough light to lend a natural, park-like feeling to the atmosphere. Trees and very long, circular wooden benches add to that.

The pride of 30 Baker Street is its five-star design rating given by the Green Building Council of South Africa. The building was made with some recycled materials from demolitions and it uses a "gas-powered tri-generation plant to produce the energy for baseload lighting, heating and cooling".

The big windows ensure optimal use of natural light and the garden (more like a parking lot) has a long water feature and 422 indigenous trees. The irrigation system runs off the high water table in the area, and an intelligent lighting system automates the dimming and switching off of lights according to the availability of natural light.

In the middle of the atrium, hanging like a marionette, is artist Marco Cianfanelli's sculpture, Seed. Looking up at it, the structure is a cubist symphony of earth-toned blocks of treated plywood hanging in space.

As you move about, you begin to distinguish the outline of the map of Africa. And standing in the most desirable position, there is something both primitive and hologrammatic about it.

The fact sheet tells us that the sculpture measures 34.33m in height, is made up of 229 plywood panels and weighs 1.5 tonnes.

Cianfanelli said: "The idea [for the sculpture] was to look at concepts of growth, which led me to think of Africa as a seed. It does speak to the bank's brief to have their identity reflected in a sculpture as a global bank, but [also as] an African bank.

"With their intention of this building being very green and ecologically sensitive, the brief was to come up with a sculpture that was made of sustainable materials that had a skills-development aspect to it.

"So I looked at the context of Rosebank where we've got this large man- made forest. It's a very simple way of looking at the idea of investment, and of growth and return.

"In terms of the actual imaging of Africa, it's made of panels that have been pigmented with sand that's been collected from regions around Africa where the bank is present. So you've got this idea of earth and soil, and wood, referring to the growth of a tree."

Laser-cut figures on the panels and other abstract patterns are based on drawings or tracings of different kinds of maps of Africa, Cianfanelli said, reflecting populations, political boundaries and topographical details.

Cianfanelli's method of creation, of making works that one has to engage physically with in space in order to decipher, lends added drama to an already dramatic space.

"One of my strategies is that I want to surprise people in the work I make. And I'm very happy for them to access it in their own way, [to] make them look at things or think about space in a different way.

"I obviously wouldn't want to encourage universal or glib ideas of what Africa is about, but rather to provoke different readings about that," Cianfanelli said about the deeper meaning of the work.