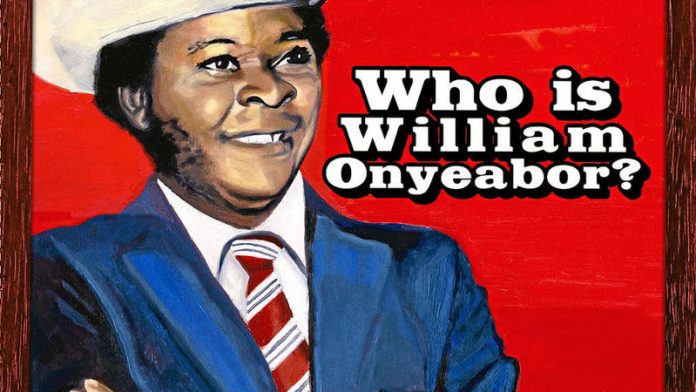 "It was supposed to take a month," sighs Eric Welles of the New York record label Luaka Bop. "That was five years ago." He is talking about Who Is William Onyeabor? – the first compilation dedicated to the cult Nigerian musician adored by the likes of Damon Albarn, Caribou and 2 Many DJs.

The title refers wryly to the label's long search for information about the man. Five years ago all fans knew was that Onyeabor released eight albums of exhilaratingly strange, synthesiser-led Afrobeat, laced with religious and political messages, on his own Wilfilms label between 1977 and 1985.

The records remained obscure outside his hometown, the south-eastern city of Enugu, and only two songs had since been revived on compilations. Oft-recycled online claims that Onyeabor had studied cinematography in the Soviet Union and owned a flour mill could not be confirmed. He was a complete mystery.

Then, in 2008, the Nigerian writer Uchenna Ikonne, who runs an African music blog called Comb & Razor, told Luaka Bop he could track Onyeabor down in Enugu and license a career-spanning compilation. The label leapt at the chance, but it took Ikonne nine months to meet Onyeabor and another two years to secure his signature. When Luaka Bop commissioned Nigerian poet and novelist Chris Abani to write the sleeve notes, Onyeabor said he wouldn't be interviewed. Ikonne told him the album couldn't be released without more information. "Well," shrugged Onyeabor, "I guess it will never come out then."

"At the beginning, we thought it was a way of negotiating," says Welles. "Maybe he wanted more money. But he said, ‘I don't need the money. I'm not a hungry man.'"

Welles became obsessed, scouring blogs, YouTube comments and social media for information, finding nothing. Whenever he phoned Onyeabor's house there was either no answer or someone hung up.  How do you bring back someone who wants to remain in the shadows?

"For every happy ending there are 10 that I just have to let go," says Eothen Alapatt, whose Now-Again label specialises in soul, funk and psychedelia. "There's a shitty part of this, where you spend a whole bunch of money, time and effort to convince someone that you could do something great with something that got lost and still be told no."

Alapatt often approaches musicians who, like Onyeabor, recorded and released their own records. "It's a special type who does that," he says.

"I could be talking about a record that might only have been distributed within a 40km2 to 50km2 radius and they're like, ‘Well it must be worth tonnes of money, otherwise you wouldn't be here.' Or, ‘Oh you're going to screw me over like everyone else.' "

When Welles arrived in Enugu this year, the mystery of William Onyeabor deepened. The address he had been given was a dark, disused shop where a suspicious woman asked, bafflingly: "Are you from Russia?". But she agreed to escort him to Onyeabor's house on the outskirts of town.

To his surprise, it was a three-storey white mansion with a fountain and a 30-year-old silver Mercedes out front. He found Onyeabor, an imposing, muscular man close to 70, on a couch watching Christian TV, and they began to talk.

Welles ended up staying in Enugu for a week, by the end of which Onyeabor was calling him "my American son". From offhand comments and talking to people who knew Onyeabor Welles got a sense of the man's unusual story.

Onyeabor was a wealthy, well-travelled local businessman who ran a semolina factory. He was a generous, if sometimes irascible, employer. He had built a film studio, recorded and pressed all the records himself, and even paid the local TV station to broadcast his promotional videos. But many mysteries remained.

Onyeabor wouldn't confirm the existence of Crashes in Love, a 1977 movie that was mentioned on a record sleeve but which nobody appeared to have seen. He kept referring to "the people from Russia", but wouldn't say who they were, nor would he discuss his rumoured years of study in the Soviet Union.

In paranoid moments he accused his guest of attempting to copy his signature or snatch a surreptitious photograph. "We have a lot of secrets in this house," he said.

The highlight of the trip came when Onyeabor was looking at a copy of 1983's Good Name and began singing and playing air keyboards with evident pride.