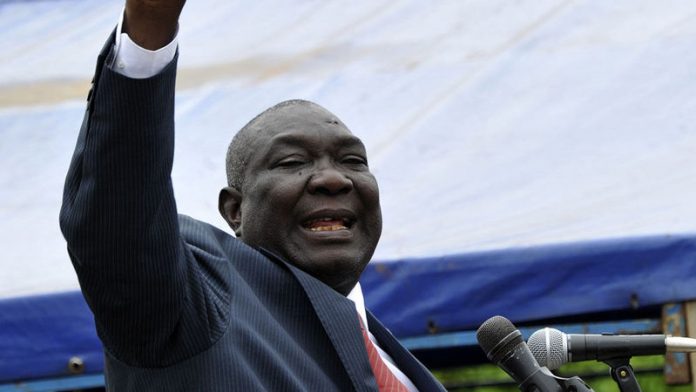 Gunfire rang out, mosques were attacked and Muslim-owned shops and houses were looted overnight in Central African Republic's (CAR) capital, despite the country's interim leadership stepping down as part of a drive to restore order.

The resignations may provide a fresh start to peace efforts and the violence had eased by daybreak on Saturday. But, highlighting security fears, the United Nations stepped up flights out for foreigners and African governments have already evacuated nearly 30 000 of their citizens caught up in the violence.

President Michel Djotodia and Prime Minister Nicolas Tiangaye quit on Friday under intense international pressure after they failed to halt months of inter-religious violence that has driven one million people, a quarter of the country's population, from their homes.

Thousands of people took to the streets of Bangui, the country's crumbling riverside capital, to celebrate the departure of Djotodia, who was swept to power by mainly Muslim rebels, known as Seleka, last March.

Abuses by Seleka forces had led to the creation of Christian self-defence militia and cycles of killings that evoked memories of Rwanda's genocide 20 years ago.

"But I can confirm that a good part of the shooting was warning shots from us to disperse looters who were targeting Muslim homes and shops," an officer in the African peacekeeping mission said, asking not to be named.

One Bangui resident, a student who gave his name as Berson, said on Saturday that looting had been going on since the previous day.

"It's the shops of Muslims that have been looted in this neighbourhood," said Berson. "There are a lot of Seleka [ex-rebels] in this area. They have to disarm them quickly. If not it's carnage."

Casualties
The local Red Cross said it had collected three bodies from the streets after violence overnight: a Christian vigilante, an ex-Seleka rebel and a civilian, according to the head of the Central African Red Cross, pastor Antoine Mbaobogo.

"We don't understand why we keep killing each other, looting and sowing destruction amongst civilians, even after the politicians people wanted out had stepped down," said Ahamat Deliriss, vice-president of the Islamic Council.

"Mosques in the Petevo, Yapele and Bimbo neighbourhoods were destroyed. It is a shame," he said.

One of a young group of young men who looted and dismantled a mosque in the city, taking away bricks and roofing, said: "It's impossible to live with the Muslims. We don't want Arabs in Central Africa."

Precarious calm
The streets of Bangui were largely quiet on Saturday. But even with 1 600 French and about 4 000 African peacekeepers on the ground, security is precarious.

The International Organisation for Migration (IOM) began airlifting thousands of stranded foreigners out of the strife-torn country on Saturday.

The IOM says more than 60 000 people from other African nations have asked for its help at their embassies in CAR. Requests had come from Chad, Niger, Mali, Sudan and the Democratic Republic of Congo to aid their stranded nationals.

Around 27 000 people, mainly from Mali, Senegal, Niger and Chad, have already been evacuated by their governments.

Ten months of violence have displaced a fifth of the CAR's population and the sectarian flare-up has killed more than 1 000 people in the past month alone.

Military intervention
Former colonial power France, which had sought to stay out of the latest crisis in a country where it has often intervened, deployed 1 600 troops to bolster the beleaguered African peacekeeping force MISCA as killings spiralled. MISCA is meant to have up to 6 000 troops but has not yet reached 3 500.

Yet violence has continued, killing 1 000 people in December. French and Chadian troops were among the victims and international pressure mounted on Djotodia to step aside at an emergency summit hosted by neighbouring Chad this week.

Alexandre-Ferdinand Nguendet, the head of the CAR transitional assembly, is officially in charge of the country until the body can select a new leader to guide CAR to elections, which are due later this year.

UN secretary general Ban Ki-moon has called on the African Union to provide promised troops speedily to help curb the "terrible crisis" in the CAR.

Joint operation
European nations on Friday agreed in principle on a plan to launch a joint military operation in the country, with a final decision expected on January 20, according to a European Union source.

Candidates to replace Djotodia have yet to emerge, but the interim parliament is due to hold a special session on Monday.

With much of the landlocked country's population in need of food aid, a major humanitarian crisis is unfolding in Bangui's overcrowded camps and in the vast hinterland.

The United Nations has warned that both ex-Seleka rebels and CAR former soldiers have crossed into the volatile Democratic Republic of Congo, causing local residents to flee.

The CAR, which has few stable neighbours, shares an eastern border with South Sudan, where nationwide fighting has been raging for three weeks.

France warned before sending troops last month that the CAR, which has been plagued by coups and civil unrest since independence in 1960, risked becoming a Somalia-style "failed state". – Reuters and Sapa-AFP