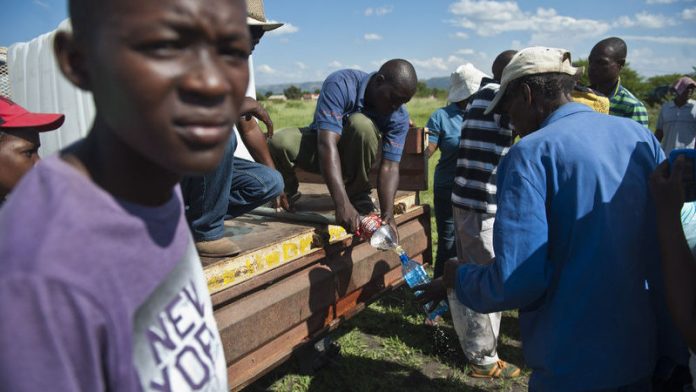 "Water will be back by Friday," she told residents. She was there with Police Minister Nathi Mthethwa after visiting the families of two men killed during violent protests in the township on Monday.

Police allegedly shot the two while they were en route to the Madibeng municipality with other residents to demand water. Beeld newspaper named them as mineworker Osia Rahube and a photographer known only as Bra Mike.

Molewa said three local water pumps in the area broke down, which she said was a "very strange problem". According to Molewa, under normal circumstances, when one of the pumps failed the remaining two were supposed to keep operating. The same problem was seen in three other areas. She promised to investigate and punish anyone found to be at fault.

"We will not rest until we find out what happened."

The area had been without running water for three months and water tankers had arrived every three days. In the meantime, water tanks would be used to supply residents. But they were not happy to hear that and told her of alleged corruption in the appointment of the contractor to supply water tanks. She promised to assign Magalies Water to deliver water.

Investigations
Mthethwa promised residents that his office would investigate the shooting. He said their interaction with families and eyewitnesses shed some light on the incident.

He urged others with information to help the Independent Police Investigative Directorate (IPID) with its investigations.

"If people don't co-operate and give this information to [the] IPID, we won't know what happened."

Mthethwa added that residents should speak to police about the alleged corruption too.

"We must arrange a proper march to Madibeng municipality and I will be there," he told locals at a sports field. He said it was the community's right to have water and he blamed the situation on poor administration. "While the water was still under Magalies, there were no such problems."

Peaceful
Meanwhile, eyewitnesses told the Mail & Guardian the police were unprovoked and threw tear gas and shot bullets into a peaceful march at Mothotlung. Marchers also said they were given no warnings before the police intervened, in contravention of current crowd control policies.

Police in the North West told the M&G on Tuesday that they had to "disperse" the crowd after stones were thrown at the police, and hawkers' shops were "looted". But they could not clarify whether Monday's operation was a dispersal operation or a crowd management scenario that went wrong.

They also could not say what time they arrived at the scene on Monday, how many officers were deployed, nor what their orders were (to disperse or manage the crowd).

"That is operational information which we cannot give out. But as police we cannot be violent … The crowd started looting hawkers' stalls and throwing stones and we had to disperse them," said North West police spokesperson Lieutenant Colonel Sabata Mokgwabone.

Chris Seabe, one of the marchers, said the police used force arbitrarily, without any provocation, and without any warning.

"The police started circling us, and then they shot at us. Those who died or who were injured were innocent." – Additional reporting by Staff Reporter

A large percentage don’t have access to adequate housing, food, clean water or sanitation, putting them and their families at a higher risk of the coronavirus
Read more
Advertising
Continue to the category
Education