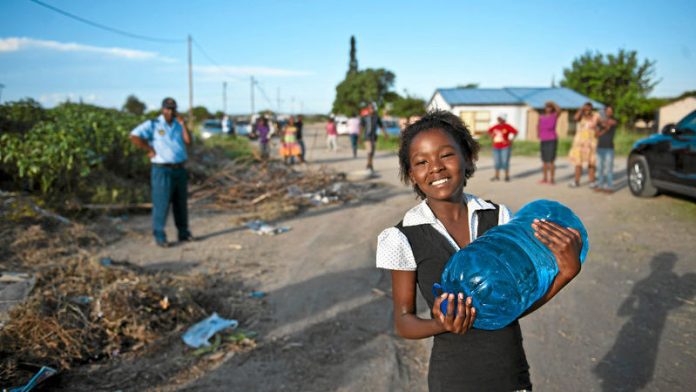 "Mr President, we would also like to take a shower," a tipsy resident of Mothotlung, a water-starved township outside Brits, shouted to no one in particular earlier this week. The convoy containing Police Minister Nathi Mthethwa, national police commissioner Riah Phiyega and Water and Environmental Affairs Minister Edna Molewa was weaving out of Mothotlung, the scene of a deadly water protest, and residents were feeling placated rather than heard.

This week, three people were confirmed dead after residents took to the streets of Damonsville and Mothotlung to protest water shortages, a service they said has been sporadic since August last year.

On Monday, Mike Tshele and Osia Rahube were killed during a march to the Madibeng municipality buildings, after police dispersed the marching crowd with tear gas and rubber bullets between Brits and the nearby township of Damonsville. Photos showing their bloodstained bodies lying on the gravel, sporting bullet holes, were widely circulated by cellphone.

On Wednesday morning another protester, Lerato Theodore Seema, was confirmed dead from head wounds after allegedly being pushed out of a moving Nyala.

'Tired of stinking'
Chris Sebea, who lives in Mothotlung, said although the march was sparked by residents who were "tired of stinking toilets, and were themselves 'stinking'", it was far from threatening, as the participants were "armed only with songs". In fact, he said, he felt "protected" during the march.

"Bra Mike never carried a weapon, but in Osia's case, there was an earlier argument where two women were arrested and placed inside a police Nyala. He had a confrontation with one of the policemen, and again when the first volley of rubber bullets was fired. Their crowd control mechanism is out of control. The police were outnumbered, but they were not under attack."

When Mthethwa and his entourage visited, primarily to convey that Independent Police Investigative Directorate (Ipid) investigations would be taking place, Mothotlung was, understandably, a community in shock. Boos and obscenities – directed at Mthethwa, a sheepish Phiyega and a steely Molewa – were the order of the day and there was a tinge of desperation in the appeals of the group of ANC supporters trying to dissuade the media from attending Julius Malema's address nearby.

The area, as Sebea stated in disgust, has become "a political battleground", with Malema offering cattle for the funerals and legal services for the bereaved.

Molewa's story, of the "strange" sudden breakdown of three water pumps, was taken with dollops of salt. What the residents echo repeatedly is that water supply problems in the township are related to a lucrative water delivery tender.

Wasted grant
In its 2011-2012 report, auditor general Terence Nombembe's office discovered that the Madibeng municipality had underspent its municipal infrastructure grant by more than R70-million.

"The municipality has not achieved its objectives of providing access to basic services, maximising job creation and skills development, uplifting the life of communities and providing poverty alleviation," the report said.

According to Politicsweb, in 2013 the Madibeng municipality was audited and about R1-billion in assets were unaccounted for or missing.

That would explain Mothotlung's dishevelled look, with its patches of untarred roads and overgrown grass verges.

Municipal chief whip Solly Malete downplayed the municipality's problems, saying: "Communities say [there is] maladministration. There is no maladministration. We received nearly a clean report, a qualified audit for 2012-2013. There were a few things related to supply chain management and financial issues. [They are not] critical issues. You can't say there is corruption when there is no proof. The community must bring proof to the relevant parties."

Protest victim
Joconia Rahube, a tall, well-built man whose brother Osia was shot dead allegedly by the police during the protest, said the triggerman is a Mothotlung resident who grew up down the road from his family home. This was confirmed by other residents living close by, who said that the house has been more or less vacant since Rahube's death.

"The reason for my brother's murder was that, at some point, he fell in love with politics and began to raise questions about what was going on," said Rahube, outside his family's yard where a prayer meeting was held as part of the mourning ritual. "He told me he was aware that certain people didn't want him, and that I too must keep my distance from them."

Rahube said his brother had since focused on Christian activities and had backed away from politics, as he was a contract worker at an opencast mine in Marikana.

Rahube's statements suggest that resources in Madibeng are allocated along political faction lines, right down to the rank and file. Sebea said a system of sub-tenders exists to placate community members who might get too vocal.

Rahube said the family was open to the suggestion by Malema (who visited the town on Tuesday) that advocate Dali Mpofu should help it to open a case of murder. "The family has allowed it [the Economic Freedom Fighters] to proceed with that. We can't sit by and watch this happen to us. Malema is a former ANC member, so he knows their loopholes."

Deadly information
The circumstances around Rahube's death appear to echo those of photographer Tshele, with several community members saying that "he had information about what happened to the water supply".

In some circles, residents said, Tshele and Rahube's deaths were being openly celebrated. "Mike saw that the water pumps had been damaged and he photographed them. His camera is missing since the day of his death."

Although the protestors' deaths are still shrouded in mystery, they do add to the mounting evidence of patterns of police brutality and their ties to power.

Andries Tatane was killed while intervening in defence of the elderly. In Cato Crest, Durban, last year, three residents died during a protracted struggle over the allocation of housing. Nkululeko Gwala, an outspoken community activist, was killed after statements interpreted as threats were uttered at a meeting attended by Durban mayor James Nxumalo and ANC provincial chairperson Sbongiseni Dhlomo. And in October last year, a 17-year-old protestor, Nqobile Nzuza, was allegedly shot in the back of the head by a policeman during a protest in Cato Manor.

The Ipid is investigating all three confirmed deaths in Madibeng.