Pedal power gets a push in cycling 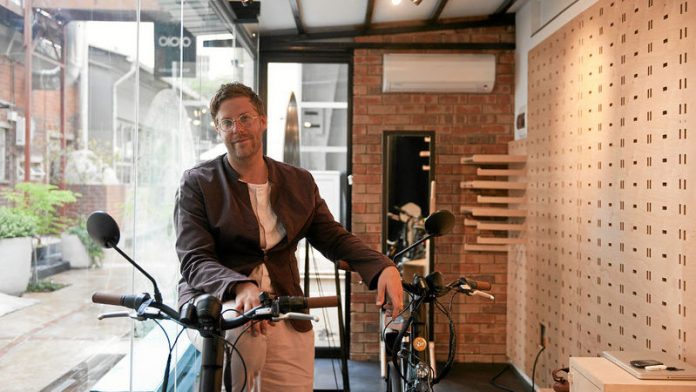 Vincent Truter is a multi-degreed polymath – a TEDx speaker who studied journalism at Rhodes University, exhibition design and museum studies in Gothenburg and the performance dance known as ankoku butoh in Japan. He is also the lead "cycologist" for his fledgling electric bicycle business, Cycology, which is part bicycle, part metaphor for a force that will drive social entrepreneurship and involvement.

How did you first get on your bicycle?
I live in Yeoville. One day my car was stolen. A client had dropped off two electric bicycles at the office. I told him to go [and take his wares] to Cape Town – in Jo'burg you need a car to get around. But then I had to go and get lunch, and I was irritated with my colleagues (and didn't feel like asking any of them for a lift), so I got on one of the bikes and cycled to Woolworths. It was a big mental and physical gearshift – the kind you don't get when you sit behind a computer all day. I started seeing and engaging with my environment in a different way. I started having conversations with people.

Tell me more about Yeoville?
I can tell you about bicycles in my life right now. Sometimes I think it's 20% about bikes and 80% about using electric motion as a way to get people to engage with each other and their cities. I'm passionate about public space and community. The activation of public space is such a contentious issue.

No, really, I want to talk about Yeoville.
I'm not really given to conventional ways of where to live and not to live. I know Yeoville is considered extra dangerous but when I compare crime statistics in Yeoville and, for example, Sandton, there's not much disparity. We have an exquisite old Herbert Baker mansion with a staircase that rambles up to a stone house. The house is on a ridge. I think it's the highest point above sea level in the province. From the back, the view feels like somewhere else entirely – a farm atmosphere in the middle of the city. But what I really love is the street life, the community. We're in a cul-de-sac and kids play soccer in the street. It reminds me of a time long gone. We're so isolated in our cars, looking out of the window at people walking on the street, thinking "shame, they don't have a car". But they're taking part in a very vibrant culture.

Your electric bicycles were the inspiration for Black Coffee's latest range, which showed at South African Fashion Week. Tell me more about your collaborations?
This space is an incubator. We have had Givan Lotz and Black Coffee, next year in the window we'll have [projects with] Tonic and Raw Design and luxury leather goods by Quamta. The cycle culture is a phenomenal notion, hipster as it is. People are drawn to the sense of independence, the off-the-gridness. When I started this brand, I connected the dots. I'm a pattern recogniser. I spoke to people I know, respect, love and asked them to collaborate, to create batteries of beauty around cycling. At some point I will string it all together in a beautiful exhibition and take these products and design artefacts to the [international] market.

Cycling isn't exactly known for being stylish, though.
If you close your eyes and think of a cyclist, you see those "hideous Hilda" tights and unnecessary testicular cleavage, very badly over-branded shirts and helmets in 15 different colours – things I personally, aesthetically, object to. There are some comfort considerations, of course, but there's no reason to dress in anything less than your best on a bicycle.

How would you describe your own style?
Many people consider me an eccentric, but I'm an aesthete and I'm passionate about clothing. Fashion is a way of expression. Social hieroglyphics. I don't over-labour as much as I used to – the impervious armour of my cool 20s. Now I want comfort, natural fibres … but I still stand out. I have most of my clothing made by a beautiful tailor who takes old things and gives them a new spin.

Does this extend into your personal space, your home?
I'm a consummate homemaker. I spend a lot of time tinkering and adjusting, getting spatial dynamics just right. I love beautiful things – my house is filled with artefacts … I have a collection of owl sculptures. Every few years an animal comes into my life. Before this it was a snail. Now it's owls. In my bedroom I have a photo portrait of my big teacher and friend in life, [the late playwright] Reza de Wet, who gave me a profound appreciation for the shadowy realm and lessons in the indeterminable duality of things of beauty.