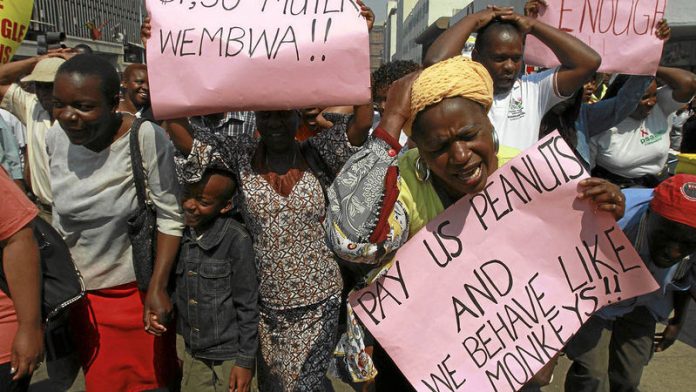 Excitement and a newly found love for Zanu-PF among civil servants is fizzling out as it becomes clear that the government is unlikely to make good on its promises to increase their salaries.

An ongoing tug of war – with government on one side and public servants on the other – has raised questions over Zanu-PF's election promises that, once in power, it would improve civil servants' salaries. Unable to fund the expected increases, Zanu-PF finds itself exposed.

Under the previous administration, the party blamed its unity government partner, the Movement for Democratic Change (MDC), which was in charge of the finance ministry, for blocking salary hikes that it said it wanted to award to workers.

Civil servants make up the country's largest workforce at about 230 000. They have been locked in protracted wage negotiations with their employer to improve their salaries since last year.

Civil servants take home nearly $300 against a poverty datum line figure of $560, which is the minimum set out for basic sustenance.

In his 2014 budget statement presentation Finance Minister Patrick Chinamasa said the salaries of civil servants alone were gobbling up nearly 75% of the state's monthly income and that this was too high.

Divisions among unions
He said a desirable figure would be for salaries to be cut to at least 30% of government income.

A combination of growing militancy within public servants' unions and their continued reference to the election promises dims the prospect of Zanu-PF pulling out of the wage negotiations.

For now, at least, the government can take comfort in the divisions among unions that have somewhat weakened their resolve.

Still, the ruling party is wary of the next general elections in 2018 and knows that, should it fail to deliver on its current platter of promises, it may not be able to curry favour with the civil servants in the next poll.

Takavafira Zhou, president of the 15 000-member Progressive Teachers' Union of Zimbabwe (PTUZ), said the union is dismayed because government is negotiating in bad faith by not putting a time frame to the negotiations.

"We are also unhappy with the lack of a time frame for these negotiations because this gives the government leeway to delay and be evasive without tying themselves to concrete negotiations. The only way is confrontation. We have been talking and there are no results from the talks," said Zhou.

Hope for a concrete offer
"Despite all this, we hope this week will see the government making a concrete offer which reflects teachers and civil servants responsibilities, qualifications and experience."

Schools opened for the first term on Tuesday, with unions backing down from a threat issued earlier to go on strike on the same day to force government's hand to meet their $1 000-a-month salary demand.

Lazarus Dokora, the primary and secondary education minister, said he had not received any official communication from the unions about the possible strike.

Raymond Majongwe, the PTUZ general secretary, said a strike was not a challenge to the authority of the new administration, but would be an expression of workers' democratic rights.

"I want to assure you that we respect the government of the day that was voted in by the people and they must also recognise that workers are suffering and they must urgently address that," said Majongwe.

Economic analyst Eric Bloch said with many competing interests in the government's in-tray it had to strike a balance in its bid to satisfy all the economic demands.

Demands and needs
"The demands of the civil servants are excessively high and unrealistic and are far above the poverty datum line and must be resisted," said Bloch. "At the same time the government must not lose sight that civil servants are entitled to fair remuneration and on time."

He proposed a method of prioritising needs, in the absence of any funding from foreign investment, as the only means to meet public servants demands.

"There are cuts that the government can make, [such as the] international travel bill, which is excessively high, so as to accommodate the present needs of public servants," he said.

But that was unlikely to happen. For now unions may have to cut back on their demands, but even then, government will still struggle to pay them fully and on time unless its economic fortunes turn around.

On Thursday government offered a 26% increase in wages that is likely to be rejected by unions as it falls short of their demands.