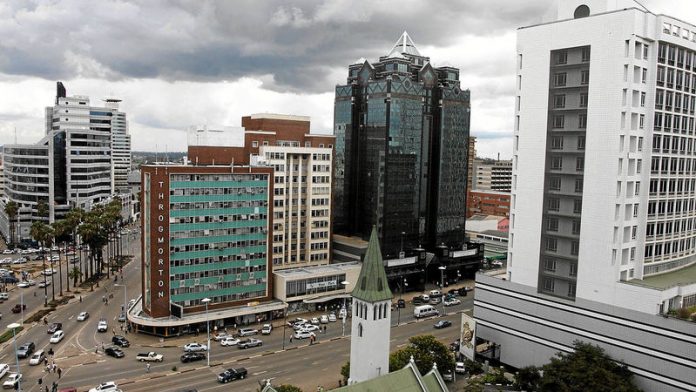 As the negative news piles up on the economic front, the Zimbabwe government is battling to restore confidence while also making moves to wring more cash out of the country's mineral wealth.

The effects of a weakening rand, falling factory output and rising imports are beginning to tell, as job losses mount and pressure increases on a government that appears short of solutions to stem the slide.

Finance Minister Patrick Chinamasa expects economic growth of 6.4% in 2014, up from 3.4% last year. But experts say growth will be slower, as the liquidity crisis worsens.

Zimbabwe has experienced economic growth since it ditched the Zimbabwe dollar for the United States dollar in 2009, but the relief that currency reform brought is now turning into a burden on a country struggling to revive its industry.

At the centre of the liquidity crisis is Zimbabwe's huge import bill, a result of the country's failing industries, worsened by the fall of the rand in South Africa, Zimbabwe's largest trading partner.

Nadia Piffaretti, the World Bank's senior country economist in Zimbabwe, sees the economy growing at 4.2%, lower than Chinamasa's forecast. She traces the slowing growth to the decline of the rand and weakening metal prices.

Zim 'in serious problems'
"The rand has lost a lot of ground and that situation is not going to reverse anytime soon. And this presents problems because the Zimbabwean economy experienced a rebound when the dollar was weak, but now when it [the dollar] is going in the opposite direction, Zimbabwe finds itself in serious problems as it has a weak economy being funded by a strong dollar," she told a business meeting recently.

Whereas the Reserve Bank of Zimbabwe could print money or tinker with interest rates to react to currency movements during the Zim dollar era, it has now lost control under the US dollar regime.

The rand averaged R8.70 to the dollar in 2009, the year Zimbabwe adopted the greenback as its main currency. In 2011, the exchange rate hovered around R7.50, before rising to an average of R10 last year, when the rand lost a third of its value. This year, the rand has already touched five-year lows against the dollar.

The result is that it is now cheaper to import goods to Zimbabwe than to make them locally. More money is leaving the country than is being brought in.

In the 11 months to November, Zimbabwe imported goods worth $3.4‑billion from South Africa, against $2.43‑billion worth of exports. In total, the $8‑billion import bill is double that of Zimbabwe's exports.

"This brings in the issue of competitiveness. It's cheaper to import than to export; therefore, the import bill will continue rising on a permanent basis," Piffaretti said.

Factory shuts down
One sign of how this is hitting local businesses is the mothballed factory of Reckitt Benckiser, whose Harare operation used to churn out products such as Nugget shoe polish and Dettol, names that have been familiar to Zimbabwean households for decades.

Now the company has announced it is shutting down its factory, throwing its workers out of work and choosing instead to import finished goods from South Africa through an agent.

Other larger companies face similar woes. Pearson Gowero, chief executive of Delta, the country's largest brewer and bottler, told investment analysts recently that it costs 60% more to buy local sugar than it does to import it.

Dairibord, Zimbabwe's biggest dairy producer, is paying 50% more to buy local raw milk than its regional competitors pay in their own markets.

Tourism, which is one of Zimbabwe's growing sectors, is also facing the strain of the weakening rand. South Africa is one of the country's biggest source markets, but arrivals are under pressure as the exchange rate makes Zimbabwe an increasingly expensive destination.

Growing local production would have countered the effect of the weakening rand, but Charles Msipa, president of the Confederation of Zimbabwe Industries (CZI), said $8‑billion is needed in new credit to revive factories.

Local companies prefer to import finished products
With no money to retool and stuck with inefficient and costly plants, local companies stand little chance of competing with imports.

Now half of the members of the CZI prefer to import finished products, according to Msipa. This means more money continues to leave the country.

Companies cannot borrow on the local market because credit is very expensive. Banks are unwilling to lend anyway, scared by the growth in loan defaults. Between last May and this year, the ratio of nonperforming loans has risen to 16% from 15.3%.

"This is just an average; the rate could actually be higher for other banks," said George Guvamatanga, head of the Bankers Association of Zimbabwe.

The National Social Security Authority, which manages the national pension scheme, reports that more than 700 companies have shut down since 2011. This has meant weaker consumer spending, another turn in the vicious cycle in which companies find themselves.

The Zimbabwe Stock Exchange (ZSE) has been an island of growth amid the anxiety elsewhere in the economy, growing by 30% last year, making it one of the region's best performing markets. But the exchange may lose some companies this year as some go private to raise money from cash-rich investors.

Market 'to rise at slower rates than 2013'
"The economy is difficult, so various parties will be looking at the value of whatever action they take," said Alban Chirume, chief executive of the ZSE.

Lynton-Edwards Stockbrokers, one of the most active trading houses on the exchange, has forecast the market to rise this year, though at slower rates than 2013.

"Lending support to this is the fact that investment alternatives are limited, with no fixed income market to talk about. Therefore, we project a base case return of 10% for the ZSE," the firm said in its 2014 outlook report.

Chinamasa conceded that Zimbabwe cannot attract any new credit with its foreign debt standing at $6.1‑billion. As long as Zimbabwe imports more than it exports, he said, the trade deficit will widen.

This year, exports worth $5‑billion are expected, but these will be dwarfed by imports of $8.3‑billion.

For salvation Zimbabwe is turning a sharper eye on its platinum wealth, as the world's second-largest resource of the metal. The government appears to be succeeding in arm-twisting platinum producers to invest in a refinery.

Experts told the Mail & Guardian that it would cost at least $2‑billion to build a refinery. Even then, the government would have to put up its own money to fund the installation of new infrastructure to support the refinery, including a new power plant.

Zimbabwe also wants to use a quarter of mining royalties to fund a sovereign wealth fund that would "support fiscal or macroeconomic stabilisation of the government, including its long-term economic and social development objectives".